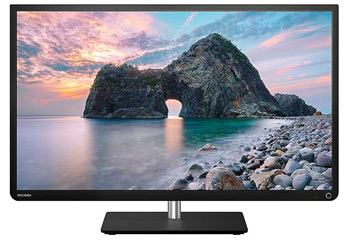 With a reputation of manufacturing solid high-definition televisions behind them, Toshiba have now entered the Smart TV domain with their new L4300 Series of smart LED TVs. The screen sizes range from 32 to 58 inches, but Yantrick found the 39 inch specimen a perfect balance between price and screen size.

Toshiba have chosen to follow a simple blueprint in designing the 39L4300. A rounded rectangular frame, coloured gun-metal like the rest of Toshiba’s TVs, envelopes the flat 39 inch screen. The sides and top of the TV have a glossy black bezel, and on the bottom runs a metal strip.

As you press the on switch, it comes to life in pure HD. With an energy-efficient LED backlight etching out the sharp contrast, the on-board AutoView component automatically adjusts settings based on room lighting conditions. Also on board is a colouring technology called ColorMaster which makes use of a six-colour palette to control hue, saturation, and brightness.

When Yantrick made it a point to check true 1080p video on the TV, it was almost like going to the cinema. With its built-in 20W speakers, it also sounded like one, as far as TVs go. Toshiba have used all their experience and resources to make sure that movies, games, and true HD television content look and sound immaculate.

Fortunately, even at 39 inches, Toshiba have incorporated the Advanced Cloud TV feature within the 39L. This smart TV platform, powered by Google’s Android operating system, really makes the product value for money. And faster too, because with it comes the ability to connect with other Android devices as well as access to thousands of apps.

The 39L comes with Wi-Fi and HD connectivity and allows you to hook up your laptops, tablets, mobile devices, USBs - you name it. Families may be particularly fond of Family Calendar, an app that allows you to send pictures and messages to your relatives. There’s also a streaming news section that keeps you posted, and is customisable with your most trusted news sources.

As a source of amusement and information, the internet is already consumed as an alternative to television. No worries then, because the Toshiba 39L comes equipped to handle both.

Yantick’s Verdict: The Toshiba 39L4300 satiates your yearning for HD entertainment without burning a hole in your pocket.