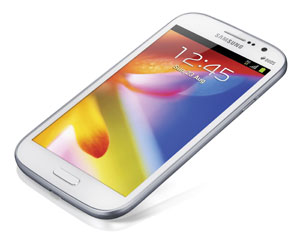 When Samsung launched Galaxy Grand in 2012, many of us who had been eyeing its Galaxy S4 and the Galaxy Note 3, two of the most coveted, most desired smart phones produced by this Korean tech giant, but notoriously out-of-reach for most, breathed a collective sigh of relief. This affordable cousin promised all the features of the two at half the price and smart phone lovers could not not just buy it. In February Samsung dolled out the second iteration of the Galaxy Grand and the version 2.0 does not dissappoint.

Samsung has freshened up the Grand 2’s design as compared to the original Galaxy Grand, and design-wise the Galaxy Grand 2 looks superior than its predecessor. It is slender and has a taller frame. The rear of the Grand 2 now sports a fine-texture faux-leather stitching similar to the one found on the rear of the flagship Note 3 model, which lends the Grand 2 a quality, premium feel. The screen has also undergone an upgrade, size-wise and pixel-count wise. A bigger 5.25 inch screen now sits atop the Grand 2, up from 5 inches on the original Grand, while pixel count has increased from a lowly 187 pixels per inch (ppi) to a more detailed 280ppi, mainly owing to the 720 pixels x 1280 pixels screen on the Grand 2, up from 480x800, resulting in a brighter and more colorful content.

The new model’s engine has also undergone an upgrade. The Grand 2 now packs a 1.2GHz quad-core processor along with 1.5 GB of RAM, resulting in the Grand 2 being more than capable of handling high-resolution videos, and memory-intensive games and applications.

Gliding through menus and home screens of the latest Android 4.3 version feels very slick, with the absence of any lag or stutter, which could not be said of the original Grand. The Grand 2 retains the 8-megapixel rear camera, which makes for a decent mobile device camera. The front-facing ‘selfie’ camera, meanwhile, is a standard 1.9 MP.

Another spec. that remains the same on the Grand 2 is the 8 GB of on board storage, which is expandable upto 64GB via a microSD card. The model’s also kept the dual-SIM support for those who regularly need access to two different SIM-cards (which thanks to our telecom companies we all do). Battery capacity, however has been bumped from 2100mAh to 2600mAh to compensate for the better screen and upgraded innards, and to expertly manage the raft of features the Grand 2 packs, like Bluetooth 4.0, Wi-Fi, Wi-Fi Direct, Accelerometer, GPS, Proximity Sensor, Hall Sensor, and Light Sensor, among others.

Yantrick’s Verdict: Retailing for Rs 37K, half that of the Grand 2’s more illustrious S4 and Note 3 cousins, the second Grand is packed with features and upgrades and caters to every need of an average smart phone user.

Dont forget other groups when you sit down to talk
SHEETAL KUMAR
Wow! It namely likewise fine treatise about JavaScript, babyliss pro curler I dissimilar Your post doesn't acquaint any sense. ray ban outlet uk if information are defined surrounded sketches one can effortlessly be versed with these. hollister sale I think a visualized exhibit can be better subsequently simply a effortless text, chanel espadrilles for sale that why it gives you improved quality. getnjloan.com Can you amuse forward me the code for this script alternatively interest distinguish me surrounded detail among relation apt this script? Vivienne Westwood online get a babyliss perfect curl Very soon this network sheet longing be outstanding among all blog viewers, isabel marant sneakers saleI too prefer Flash,