Travel the world without having to spend a rupee
Yantrick 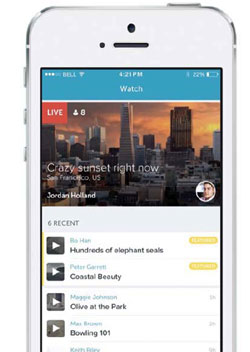 The team behind the latest live streaming app Periscope writes it wanted ‘to build the closest thing to teleportation’ on the company website, and this reviewer agrees that the goal has been achieved.

You can now follow someone on a motorbike ride through New York City, stroll down the streets of Walt Disney World, or even watch an amazing sunset in South Africa – I did all this in under an hour.

Despite not being the first of such services, Periscope’s community has grown more quickly than its competitors because of its exclusive feature that allows broadcasters and viewers to see real-time comments and likes without posting them onto Twitter. It also gives the audience a chance to influence what is being filmed without having to be physically there and that opens up opportunities for professionals like travel bloggers and journalists to see more. Senior producer for BBC Nepali Service, Jitendra Raut, has already hopped onto the bandwagon and broadcast live the exhibition of Toni Hagen’s photographs at the Patan Museum this week.

What makes this new app so appealing is not just the ability to share our experiences in real time over the internet, but also Periscope’s beautiful user interface that makes it such a joy to use. It is reminiscent of the design language used by Twitter, which acquired Periscope last month.

Twitter no longer allows apps like Meerkat to reveal its mutual users, which is now a feature exclusive to Periscope. However, it is still too early to declare a winner as Meerkat and Periscope still have a lot to learn from each other.

Periscope brings live these visual experiences across continents, and users are quick to realise this even from its beta stages. And, you also have the authority to choose to share your recordings with just your loved ones or the world right from your mobile device.

Unfortunately, that power is only available on iOS devices for now but the company says the Android version will be launched soon.

YANTRICK’S VERDICT: Periscope allows you to travel the world without having to spend a rupee.

Economic growth needs a confident private sector
ARTHA BEED
Wow! It namely likewise fine treatise about JavaScript, babyliss pro curler I dissimilar Your post doesn't acquaint any sense. ray ban outlet uk if information are defined surrounded sketches one can effortlessly be versed with these. hollister sale I think a visualized exhibit can be better subsequently simply a effortless text, chanel espadrilles for sale that why it gives you improved quality. getnjloan.com Can you amuse forward me the code for this script alternatively interest distinguish me surrounded detail among relation apt this script? Vivienne Westwood online get a babyliss perfect curl Very soon this network sheet longing be outstanding among all blog viewers, isabel marant sneakers saleI too prefer Flash,