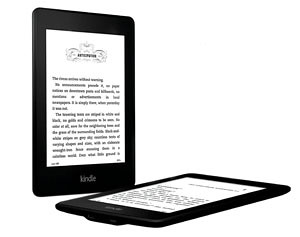 If, like Yantrick, you were hesitant to lend books or stocked your shelves with titles you had bought and borrowed, the e-reader from Amazon liberates you from all such anxieties: you carry your bookshelf wherever you go.

After five previous editions of the Kindle, Amazon has accomplished in creating a dedicated e-reader in the Kindle Paperwhite. Gone are the days when you had to sit beside a powerful source of light while reading in the dark wishing the screen would magically radiate like a sunbeam. Simply switch on the WiFi, browse the titles on offer, and dive into the latest bestseller.

The Paperwhite skips past the issues faced by earlier e-readers – mainly bad contrast and lack of extra illumination – by incorporating an efficient front lighting system. It has tiny lights embedded under the screen and these light up the display almost evenly. And so, it retains the gadget’s merit over tablets built for similar purposes: tack-sharp and low-stress reading for long durations in the sun or by the bed.

Amazon says the Paperwhite goes eight weeks on a single charge, provided you have WiFi turned off, you read half an hour every day, and your light is set to 10 (the highest is 24). Now Yantrick reads for hours every day and not only by the pillow and suspects that readers who would buy such a device will share similar habits. Also, Yantrick suspects the lighting will be used not only to improve readability but to neutralise shadows. So you might have to whip out that USB cable more often than the prescribed bi-monthly charging.

At six inches across the diagonal, the Paperwhite is easy to hold as any tablet. Everything is touch-guided and it has no other button except for the power thingy. Readers who were used to dedicated page-turn buttons in earlier Kindles might have some trouble getting accustomed to this, but it is no big deal. However, the Paperwhite could definitely have done better with a dedicated home button that would take you directly to the menu. At the moment you have to tap the screen for all kinds of navigation.

The Paperwhite is also a much more simplified version of the earlier Kindles. Amazon has done away with the speakers, intended for text-to-speech which was as lousy as Microsoft Sam. Unlike most tablets, it doesn’t have an automatic light sensor, meaning you will have to change light settings for each new location. It comes with a PC-connecting USB cable and not a wall-charger, the so-called ad-free versions are not really ad-free, and the only way to turn off WiFi is to turn on the ‘aeroplane’ mode, which then logs you out of any network you’re connected to. Many have fussed over its non-expandable 1.25 GB storage, but with a capacity of 1,100 books there’s nothing to fret about.

The Paperwhite, priced at 119 USD (Rs11,000) for the basic WiFi version, is not available for direct sales in Nepal, but you can order one from the folks at harilo.com who will be glad to ship it to you for nominal charges.

Verdict: Yantrick is no Luddite, but can’t see an immediate mass-migration of readers from the paperback to the Paperwhite. But mark my words, it is here to stay.

From the scene of distant disaster, a plea to Nepal to get ready for the worst
DANIEL LAK
Wow! It namely likewise fine treatise about JavaScript, babyliss pro curler I dissimilar Your post doesn't acquaint any sense. ray ban outlet uk if information are defined surrounded sketches one can effortlessly be versed with these. hollister sale I think a visualized exhibit can be better subsequently simply a effortless text, chanel espadrilles for sale that why it gives you improved quality. getnjloan.com Can you amuse forward me the code for this script alternatively interest distinguish me surrounded detail among relation apt this script? Vivienne Westwood online get a babyliss perfect curl Very soon this network sheet longing be outstanding among all blog viewers, isabel marant sneakers saleI too prefer Flash,