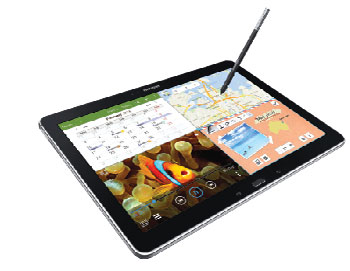 The recent trend of large screen sizes on smart devices looks set to continue with the latest Samsung device, the Samsung Galaxy Note Pro (SM-P901) tablet. Boasting a massive 12.2 inch screen, the SM-P901 is a device that stretches the upper limits of what we call a tablet, seriously encroaching on laptop territory. Samsung envisioned the SM-P901 as a workstation/laptop replacement, and with the power and performance that the SM-P901 packs, it is easy to see why.

Cut from the same cloth as the brilliant Galaxy Note 3, the SM-P901 looks and feels like a stretched-out Note 3, and sports the same faux-leather back, which feels comfortable in-hand, and looks like something you would like to pull out of your bag in an office meeting. The black variant in particular looks more professional and premium rather than the white one. Unlike the Note 3, the SM-P901 is fitted with a dual-speaker setup, which occupies both edges of the device, while the stylish S Pen is holstered in the upper-right edge of the device. The behemoth of the SM-P901 is in terms of size; it is surprisingly light and thin at 750g and 0.31 inch respectively. An impressive screen resolution of 2,560 pixels x 1,600 pixels translates to a high pixel density of 247pp, resulting in greater detail in everything from icons to videos, along with fantastic viewing angles, whether you are watching HD movies or getting work done.

The SM-P901 runs on Google’s Android mobile operating system which is powered by Samsung’s powerful Exynos 5 Octa processor. It comes with a whopping 3GB of RAM, resulting in ultra-fast responsiveness and multi-tasking on another level. The ability to run up to 5 apps simultaneously on the huge screen really is a treat, especially if you intend to use the SM-P901 for your office work.

Samsung has also packed the SM-P901 full of premium software for free, with the icing on top undoubtedly being the Hancom Viewer (for document viewing/editing), e-Meeting (a conference app) and Remote PC (for mirroring/ remotely controlling PC/Mac) apps. The SM-P901 is also decked out with regular Note series features like front and back cameras (2MP and 8MP respectively), an IR blaster, 3G capability, and the S Pen, which really excels due to the extra screen space. The SM-P901 is bundled with a Samsung Bluetooth Keyboard, which doubles as its cover. Internal memory of only 32GB (expandable up to 64GB) is a minor grievance, especially since the SM-P901 is intended as a work and multimedia powerhouse. The battery life of 10 hours is acceptable.

Yantrick’s Verdict: For those that believe bigger is better, there is no current tablet like the P501. Everything about the SM-P901, its size, build and performance exude class. It is the tablet that everybody wants but, at Rs 90,000 (approx), one that only a few can get.

Do not take the mountains lightly

RAMESH POUDEL in POKHARA
Wow! It namely likewise fine treatise about JavaScript, babyliss pro curler I dissimilar Your post doesn't acquaint any sense. ray ban outlet uk if information are defined surrounded sketches one can effortlessly be versed with these. hollister sale I think a visualized exhibit can be better subsequently simply a effortless text, chanel espadrilles for sale that why it gives you improved quality. getnjloan.com Can you amuse forward me the code for this script alternatively interest distinguish me surrounded detail among relation apt this script? Vivienne Westwood online get a babyliss perfect curl Very soon this network sheet longing be outstanding among all blog viewers, isabel marant sneakers saleI too prefer Flash,