When even sex has gradually stopped being a taboo, British journalist Rose George goes boldly where few men (and women) have dared to tread to tackle the last great taboo: shit.

We do it all at least once a day, we spend three years of our lives in the toilet, and yet we pretend that what comes out doesn’t exist. Out of sight is out of mind. The bacteria in human faeces has been the single biggest killer of human beings in history through cholera epidemics, diarrhoeal dehydration, or typhoid. Despite all our technological progress, our inability to separate what we digest from what we ingest makes it a killer of global proportions, as George tells us in her gripping book, The Big Necessity: The Unmentionable World of Human Waste and Why It Matters.

People prefer to snigger when confronted with the subject, laxative commercials cut away to tasteful animation to show the gut. And the only time we refer to it directly is when we use toilet humour. George converts the scatological into a respectable treatise on medical anthropology. The book is crammed with facts.

Squeamishness about bowel emptying kills, is George’s message (see interview). We’d rather flush the problem down the toilet so as to not have to think about it. George goes around the world meeting people who are taking on excrement head-on. In Japan, she sees robotic toilets that do everything for you, even measure your blood pressure on the go. She interviews Indian toilet entrepreneur Bindeswar Pathak who has built millions of public toilets and pipes biogas for cooking. She meets cleanliness activists in South African and the inventors of the ‘Gulper’ in Tanzania.

For George, it is a criminal waste to flush human waste by mixing it with clean drinking water. As fresh water becomes scarcer, new sustainable ways need to be found to manage human waste. Reading The Great Necessity it gets difficult to tell who is more civilised: people in the ‘turd world’ where water is often used to clean up after defecation, or the industrialised countries where paper is used to wipe behinds. If you are not one of those who reads a book in the toilet, you can start with this one.

After picking through human faeces, George is now in Nepal researching the other great taboo: menstruation. 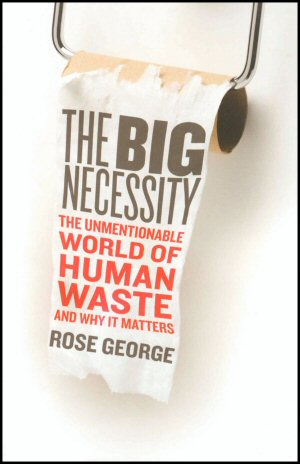 The Big Necessity: The Unmentionable World of Human Waste and Why It Matters

$10 for hardcover on Amazon

What will we do when we come to the fork in the road
DANIEL LAK
Wow! It namely likewise fine treatise about JavaScript, babyliss pro curler I dissimilar Your post doesn't acquaint any sense. ray ban outlet uk if information are defined surrounded sketches one can effortlessly be versed with these. hollister sale I think a visualized exhibit can be better subsequently simply a effortless text, chanel espadrilles for sale that why it gives you improved quality. getnjloan.com Can you amuse forward me the code for this script alternatively interest distinguish me surrounded detail among relation apt this script? Vivienne Westwood online get a babyliss perfect curl Very soon this network sheet longing be outstanding among all blog viewers, isabel marant sneakers saleI too prefer Flash,