Witness to history in the making 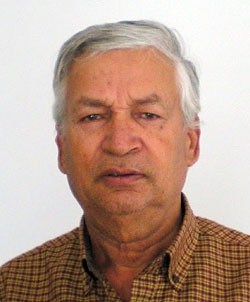 Madhav Acharya
Under a blue sky in the summer of the year 1978 Nepal waited the arrival of a celebrity guest from its neighbour to the north.

China’s paramount leader Deng Xiaoping had chosen Nepal for one of his rare foreign jaunts, and King Birendra, the enthusiastic host, had ensured that a red carpet was rolled.

Vice-Premier Deng’s visit to China’s tiny neighbour in South Asia had evoked immense interest and the world media based in the region had descended to Kathmandu to cover the event.

Page 22, My Tryst with Writing

This is one of the many milestones in Nepal’s recent history that correspondent Madhav Acharya writes about in his book, My Tryst with Writing.

The book is a combination of other events and anecdotes which Acharya witnessed firsthand and which he now recounts. As a journalist with RSS and Radio Nepal, and later correspondent for Kyodo News Agency, Acharya lived through a pretty tumultuous period of Nepali history.

Acharya has an accurate recall, and an eye for detail that has stood him in good stead as a correspondent. He has a ready turn of phrase when recounting many of the personal, political, and national stories that have held our interest over those years.

The book opens somewhat slowly with the account of how, urged on by his grandfather, he turned away from the family teaching tradition to become a writer and journalist.

Perhaps the readers’ attention might have been more easily captured early on by opening with the true story of how, at 10:15pm on 1 June 2001, he got the ‘scoop’ on the tragic story unfolding from the Royal Palace and sent it off to Kyodo. Others followed, but Madhav had the story out accurately, and ahead of the rest. 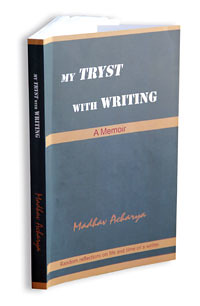 He also relates his encounters with BP Koirala, Liz Hawley’s Reuters days, Girija Koirala’s ups and downs, the story of Bhutan refugees, the then King Gyanendra’s coup, the Maoist insurgency, India’s influence in Nepal politics , Lumbini developments, and the Japanese involvement, meeting with Baburam Bhattarai north of Gorkha and Sher Bahadur Deuba in Kathmandu. He also has a section on Himalayan mountaineering.

Acharya could be faulted about having perhaps rather too many references that reflect a man who feels that much of the time his cup was half empty rather than half full. There are far too many examples of ‘Nepali English’, but that lends the book a quaintly exotic voice. But I am probably biased because Madhav is my golfing buddy.

My Tryst with Writing

A Memoir by Madhav Acharya

From Asan to Angkor

Maoist ideologue from Baburam Bhattarai writing under his alias in Janadharana, 16 December

Why the Maoists won’t talk

Punya Gautam Biswas in Himal Khabarpatrika, 16-30 December
Wow! It namely likewise fine treatise about JavaScript, babyliss pro curler I dissimilar Your post doesn't acquaint any sense. ray ban outlet uk if information are defined surrounded sketches one can effortlessly be versed with these. hollister sale I think a visualized exhibit can be better subsequently simply a effortless text, chanel espadrilles for sale that why it gives you improved quality. getnjloan.com Can you amuse forward me the code for this script alternatively interest distinguish me surrounded detail among relation apt this script? Vivienne Westwood online get a babyliss perfect curl Very soon this network sheet longing be outstanding among all blog viewers, isabel marant sneakers saleI too prefer Flash,