Lil Bahadur Chettri is 80 and hardly knows the country of his ancestors, even though he has written with emotion and accuracy the pain of migration in his famous novel, Basain. He visited Dharan recently for a literature conference where Nepali Times’ Sita Mademba interviewed him. 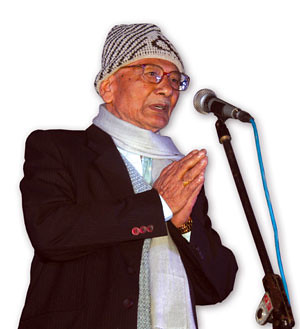 Nepali Times: What is the situation of the Nepali language in India and Assam?

Lil Bahadur Chettri: There is a language movement going on to try to pressure the Assam state government to make Nepali a subject in schools and colleges. The government has in principle agreed and if this happens it will strengthen the role and position of the Nepali language in India. People of Nepali origin yearn to learn the language and literature of their mother country, we are trying to publish more books.

This isn’t new, Nepali settlers in India have been trying to keep their mother tongue alive. Now, there are even more Nepalis and there are more language related activities.

If nothing else, Nepalis in India are writing books in Nepali. There are also other activities to conserve folk songs, dances, and culture. Nepali was included in the 8th Schedule and accepted as an official language. It is possible to get a degree in Nepali through distance learning and there is interest in doing masters in Nepali.

Is it true Nepalis used to be reluctant to speak Nepali in Assam?

They still are. Mostly in areas where there aren’t too many Nepalis, and they study in Assamese, live among Assamese, and marry Assamese. The children of my own younger sisters can’t speak Nepali. Others are ashamed to speak Nepali in public even if they know it. But since Bhupen Hazarika wore the Nepali cap we are more accepted. We even started calling the Nepali cap, the ‘Bhupen Cap’.

Are there Nepali books being published in Assam?

If you count from the beginning, there must have been about 40 books published so far and up to 250 books of Nepali poetry. The quantity is going up, but we have to preserve the quality of writing. The state of newspapers and periodicals is not good. They are hard to sustain because of the lack of readership and advertising.

How does it feel to be back in Nepal?

My ancestral home is in Sudap of Terathum district and my father went to India when he was a boy. I was born in Guwahati in Assam and I based the plot and characters in my book Basain on my father and grandfather’s personal experiences that forced them to migrate. I don’t come to Nepal that often and there aren’t many links with the larger family. But when I meet Nepalis, or come to Nepal, I feel like I’ve come home. It feels like I am cured of the stress of exile. Whenever Nepalis come to Assam, I take them around myself in my scooter. Meetings like this one in Dharan will build bridges between Nepalis in Nepal and Nepalis in India.

The return of the native 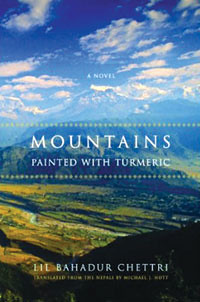 When Lil Bahadur Chettri published his slim novel, Basain, in 1958 it evoked a powerful response among Nepalis in Nepal and abroad. Chettri, a descendant of Nepali immigrants, wrote the book in Assam where he still lives basing his portrayal of rural Nepal on interviews with more recent Nepali migrants to India.

Basain went on to become a best-seller because its heart-wrenching plot was familiar to almost every family in Nepal who has a relative working abroad. It also became a prescribed text book in high schools, and every literate Nepali has read it. In 2005, Basain was made into a Nepali feature film and five years ago it was published in translation by Michael J Hutt, professor of Nepali at the School of African and Oriental Studies in London with the English title Mountains Painted with Turmeric. The caste and gender discrimination, poverty, and injustice that spurred Chettri to write the book 55 years ago still exist and some would say are even more entrenched. But so is the fortitude and generosity of the Nepali spirit portrayed in the 70-page novel. Entrenched oppression forced generations of Nepalis to migrate to the Madhes or Muglan, now they also go to Muscat and Malaysia.

The story is set somewhere in the multi-ethnic hills of eastern Nepal. Dhane’s family lives a precarious, but contented existence. A family tragedy and the weight of subjugation by powerful village loan sharks force him to migrate. This misery and mystery is the story of millions of Nepali families through history.

Today, Nepal’s rural youth are selling off ancestral land to pay middlemen to take them abroad, but the wrenching dislocation is the same. That is also the reason Hutt says he chose to translate Basain: “The way a family’s dispossession and flight from Nepal are represented [in the novel] tells us something about the historical fact of migration from the Nepalese hills, as well as reveals the author’s attitudes to the fact.”

This time it is nothing less than the future of our freedoms that is at stake.
CK LAL
Wow! It namely likewise fine treatise about JavaScript, babyliss pro curler I dissimilar Your post doesn't acquaint any sense. ray ban outlet uk if information are defined surrounded sketches one can effortlessly be versed with these. hollister sale I think a visualized exhibit can be better subsequently simply a effortless text, chanel espadrilles for sale that why it gives you improved quality. getnjloan.com Can you amuse forward me the code for this script alternatively interest distinguish me surrounded detail among relation apt this script? Vivienne Westwood online get a babyliss perfect curl Very soon this network sheet longing be outstanding among all blog viewers, isabel marant sneakers saleI too prefer Flash,