But Ahmad is not dealing in serious history here. He opts for a more palatable hodgepodge of folklore, journalism and travelogue, divvied up into sections too brief to do their subjects justice; it’s frustrating that a book that means to enlighten us on Bhutan finds it necessary to rely on such a mash-up. Ahmad’s easy, anecdotal style leads him to lazy statements, and when he attributes the domination of the Drukpa school of Buddhism to 11th century mystic Milarepa, there is no real consideration of the significance of either. 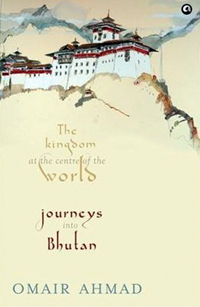 The Kingdom at the Centre of the World:

However, the simplicity with which Ahmad outlines Bhutan’s religious and secular evolution serves some purpose and the reader begins to grasp the difficulties the tiny kingdom has faced throughout its miraculous survival in a rough neighbourhood. Ahmad also, by recounting the invention of the suspension bridge in Bhutan and the tea-fuelled Duar Wars with the British, manages to posit Bhutan as less isolated, if not quite the centre of the world.

If unbiased historical analysis is not Ahmad’s forte, however, we have a right to expect real insights into Bhutan’s character, earned through hard miles off the beaten track. Instead we are served up with vignettes of a few tourist sites, supplemented with weak anecdotes culled from previous visitors. Is the writer being disingenuous when he claims that as a political advisor in New Delhi in 2005, he found ‘almost no concrete information about the country’? Or perhaps he is trying to convince us that information was scarcer than it was, so as to present his own travels as more adventurous than they actually are? To his credit, Ahmad does have a go at setting the scene for the inevitable discussion of ‘the Nepali issue’.

Several chapters explain Bhutan’s anxiety regarding its independence and national character before Ahmad works up the nerve to address the question of the Lhotsampas, the ethnic Nepalis who comprised a third of Bhutan’s population before approximately 100,000 left to become refugees in Nepal from the late 1980s onwards.

Ahmad describes the escalation of conflict between overzealous but non-violent state authorities seeking to implement nationalistic ordinances and violent Lhotsampa revolutionaries and suggests that those ethnic Nepalis who doubted their ability to cope left while many others stayed on. One senses that Ahmad is trying to be balanced, but in supporting the hypothesis that the vast majority of those in the refugee camps were actually Nepalis from Nepal and India, he risks sounding like an apologist for ethnic cleansing, not least when he dismisses activist Tek Nath Rijal’s account of his decade-long incarceration in Chamgang jail, which allegedly employed mind control techniques, as ‘something from the X Files’.

Refugees dispensed with, Ahmad moves on to an admiring account of the Fourth King’s development philosophy, detailing how he abdicated in favour of his son and guided the country to democracy. En route, he offers this remarkable justification for Bhutan’s homegrown indicator of development, Gross National Happiness. The consequences of unhappiness are to be seen everywhere, Ahmad declares; Bhutan has not failed to notice how this has led to conflict across the region. Once more, there is no analysis of what Gross National Happiness might offer as an alternative to Gross National Product, merely the banal claim that Bhutan has decided to prioritise the happiness of its citizens. But which state in history has not claimed to have the interests of its citizens at heart?

It is this simplistic view of things, finally, that dismays the reader looking for a solid depiction of Bhutan. For all the book’s claims, Ahmad perceives little more than your average, informed tourist. This is not the definitive book on Bhutan you have been waiting for: it really is just one man’s journey.