Reading in the rain

The rainy season is made for reading. The romance of reading in the rain is only exceeded perhaps by the romance of singing in it. Nepali Times recommends two classics about the monsoon that should be required reading this monsoon.

For McCurry, it was a visual journey to document in images the life-giving rains that also take lives in Nepal, India, Pakistan and Bangladesh every summer. The anticipation of the moisture-laden clouds as the Indo-Gangetic plains swelter under sauna-like heat. But this heat is necessary to build the low pressure necessary to suck in moisture-laden air from the Bay of Bengal and the Arabian Sea. McCurry travels to Pokhara, braves landslides and photographs rice-planting on dizzyingly steep rice terraces, and on through the Kali Gandaki gorge (the Jomsom road had not yet been built) to the rain-shadow. But McCurry doesn’t need words, his pictures tell it all: dust storms in Rajasthan as it waits for the rains, a tailor carrying his sewing machine neck-deep in flood waters in Bangladesh, the emerald wrinkles of paddy terraces of the Manohara Valley in Kathmandu, a boy herding water buffaloes wearing a banana leaf. 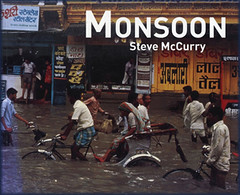 But to really learn about the physics of the monsoon, Frater’s book is a thriller in which you follow the author as he waits to rendezvous with the first dark squall line as it arrives in Kovalam beach on the Kerala coast in early June and literally chases it across the subcontinent. On to the Ganges-Brahmaputra delta in Bangladesh, the waterfalls on Cherrapunji which has the highest annual precipitation in the world and the rains are so heavy the hills have no topsoil, along the way why although the rain arrives from the east, it is called the south-west monsoon, and how there are two arms of the monsoons: the eastern one from the Bay and the western arm from the Arabian Sea. 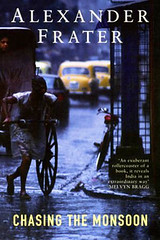 Chasing the Monsoon By Alexander Frater

Frater’s fascination of the monsoon goes back to the days he grew up with his Scottish doctor father in the South Pacific, and he does a good job in expanding the geography of the monsoon beyond the subcontinent to northernAustralia, Madagascar, the Philippines and even Central America. You learn about the pressure systems that drive this seasonal rush of moisture that brings the rain that farmers across the world depend on for subsistence.

This is travel writing at its best: a passionate look at something that we take for granted and often curse. While chasing the rains, Frater describes the people he meets, the bureaucrats who try to stall him, a glimpse of the travails of travelling across India in the 1980s. But there are parts of it that are still timely and accurate descriptions of India during this year’s monsoon, which has brought so much havoc already: ‘As a romantic ideal, turbulent, impoverished India can still weave its spell, and key to it all — the colours, the moods, the scents, the subtle mysterious light, the poetry, the heightened expectation, the kind of beauty that made your heart miss a beat – well, that remained the monsoon’

Witness to history in the making (My Tryst with Writing, A Memoir by MadhavAcharya)

A yam between two stones (and a huge boulder)

What is behind the Maoists anti-American rhetoric?
RABINDRA MISHRA

Freedom has meant a daily struggle for kamaiyas and relief in yet far away
HEMLATA RAI
Wow! It namely likewise fine treatise about JavaScript, babyliss pro curler I dissimilar Your post doesn't acquaint any sense. ray ban outlet uk if information are defined surrounded sketches one can effortlessly be versed with these. hollister sale I think a visualized exhibit can be better subsequently simply a effortless text, chanel espadrilles for sale that why it gives you improved quality. getnjloan.com Can you amuse forward me the code for this script alternatively interest distinguish me surrounded detail among relation apt this script? Vivienne Westwood online get a babyliss perfect curl Very soon this network sheet longing be outstanding among all blog viewers, isabel marant sneakers saleI too prefer Flash,