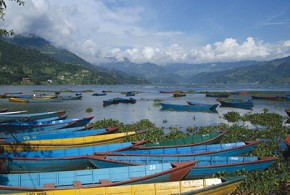 First anniversary, Visit Shop with a Story as it celebrates its first anniversary; features an exclusive workshop by social entrepreneurs and producers. 11am to 4pm, 24 January, Babar Mahal Revisited

Property rites, Explore power struggles in this future-in-the-present action drama based on the play by Alan Haehnel and performed by Ullens IB students. 29 January, 6pm and 30 January, 9pm,

Sasto Deal is organising a ‘Donate a blanket’ program for victims of the earthquake in Gorkha, Dhading and Sindhupalchok. Contribute Rs 500 per blanket. info@sastodeal.com

Yoga for the Soul Relax and unwind on a three-day yoga retreat in Neydo, a Tibetan monastery nestled in the hills of Pharping, far away from the crowded streets of Kathmandu. Discover the harmony and balance yoga can bring into your lives at this retreat organised by Pranamaya Yoga Studio. The sessions will be led by trained yoga professionals. Each retreat will have a minimum of 4 and maximum of 16 participants.

The package will include transportation to and from Thamel to the monastery; 10.30am pick up on Monday mornings and 7pm drop off on Wednesdays. The accommodation will be on a twin sharing basis and cover meals (vegetarian) and refreshments. 7 to 9 March, Neydo Monastery, Pharping info@pranamaya-yoga.com pranamaya-yoga.com

In a unique project, popular Nepali musicians have put childrens peace poems into song and will sing together at a charity concert
SRADDHA BASNYAT

Baburam Bhattarai in Kantipur, 10 August
Wow! It namely likewise fine treatise about JavaScript, babyliss pro curler I dissimilar Your post doesn't acquaint any sense. ray ban outlet uk if information are defined surrounded sketches one can effortlessly be versed with these. hollister sale I think a visualized exhibit can be better subsequently simply a effortless text, chanel espadrilles for sale that why it gives you improved quality. getnjloan.com Can you amuse forward me the code for this script alternatively interest distinguish me surrounded detail among relation apt this script? Vivienne Westwood online get a babyliss perfect curl Very soon this network sheet longing be outstanding among all blog viewers, isabel marant sneakers saleI too prefer Flash,