India’s election exposes flaws in its system of parliamentary representation 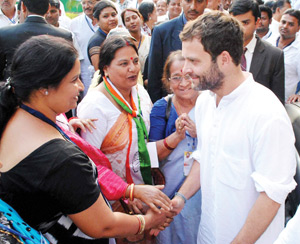 RAHULGANDHIINDIA.WORDPRESS.COM
CAMPAIGN TRAIL: Congress leader Rahul Gandhi on a recent visit to Odisha.
India’s month-long election may be happening in the world’s biggest democracy, but the country’s system of parliamentary representatio is deeply flawed. There is a disconnect between the popular imagination about the role of MPs and the functions the Indian Constitution has scripted for them.

MPs are expected to participate in the framing of laws, discuss policies of the government, reining it from an executive over-reach. They are also supposed to articulate the issues involving those they represent.

But talk to people across India today and you realise the MPs are not judged on their performance in Parliament. People grade them on parameters the MP is not much in control of: development. Accessibility is another yardstick. Did the MPs continue their dialogue with the electorate after getting elected? Voters want an intimate relationship with MPs, wishing to see and speak to them, regardless of the effectiveness of this dialogue. Yet, such interactions are impossible because Indian constituencies are huge with an average population of 2.5 million spread out in remote hamlets and bustling towns.

An MP wishing to establish personal contact with the electorate must commit enormous resources, energy and time. This is precisely why Indian democracy thrives on a patronage system: the MP maintains personal contacts with influential, often wealthy, mofussil elites, hoping they will help harvest votes in return for favours later.

In no position to address the aspirations of people, political leaders harness caste, religious or linguistic identities to mobilise votes. They turn elections into an issue of group or community pride and solidarity. Caste and religion become the most cost-effective methods of mobilisation in a short time.

Indeed, the mammoth constituencies provide an intrinsic advantage to big parties which can mobilise election funds. Money is needed to bankroll advertisement campaigns and party footsoldiers who enable a candidate to establish a substantial presence, and for pay-offs to leaders of social groups to which they don’t belong but want their votes.

The disconnect between the constitutional contemplation and the popular perception of the MP’s role was the principal factor behind the demand to initiate the Members of Parliament Local Area Development Scheme. In his new book, Public Money, Private Agenda: The Use and Abuse of MPLADs, journalist A. Surya Prakash says the idea of having a separate development fund for MPs was a consequence of the delinking of Assembly elections from Lok Sabha elections, which, till 1967, were held simultaneously.

However, Indira Gandhi decided to hold parliamentary elections in 1971, a year before they were due, triggering unintended repercussions. Till then, the MPs piggybacked the MLAs of their constituencies.

The delinking of Lok Sabha and assembly elections provided MPs with a personality of their own, but also mounted pressure on them to address their electorate’s concerns to bag their votes. It was this realisation which prompted MPs to clamour for a separate fund to meet the needs of their constituencies. Since 1993, each MP is entitled to recommend projects worth 50 million per year.

Considering the enormous size of Lok Sabha constituencies, an expenditure of 250 million over five years, even when diligently spent and monitored, can’t lead to overwhelming changes in the lives of citizens. Worse, the efficacy of MP local allocations have been eroded because of defalcation of funds.

No wonder, sitting MPs increasingly incur the wrath of voters. For instance, 60 per cent of sitting MPs who contested the 2009 Lok Sabha elections in Uttar Pradesh lost. The list of sitting MPs who won in 2009 mostly comprised of those who had a national profile, or were dynasts, or caste and religious leaders, or had a certain glamour quotient. Indeed, India’s representative system will increasingly seem a sham unless, for starters, the existing parliamentary constituencies are split and the role of MPs redefined.

The vote in Varanasi AJAZ ASHRAF

Comic book adaptation suffers the curse of the sequel
A. ANGELO D'SILVA

A busy autumn ahead for mountaineering

Nepalis mustn't be made to wait for a new constitution to see real improvement in their lives
IAN MARTIN
Wow! It namely likewise fine treatise about JavaScript, babyliss pro curler I dissimilar Your post doesn't acquaint any sense. ray ban outlet uk if information are defined surrounded sketches one can effortlessly be versed with these. hollister sale I think a visualized exhibit can be better subsequently simply a effortless text, chanel espadrilles for sale that why it gives you improved quality. getnjloan.com Can you amuse forward me the code for this script alternatively interest distinguish me surrounded detail among relation apt this script? Vivienne Westwood online get a babyliss perfect curl Very soon this network sheet longing be outstanding among all blog viewers, isabel marant sneakers saleI too prefer Flash,