Clash of civilisations in Varanasi 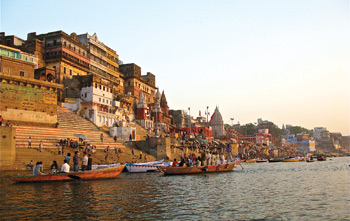 JUSTVARANASI.COM
Former journalist and social activist Ateeq Ansari, 57, comes across a group of men in Varanasi’s labyrinthine Pilli Kothi where he’s campaigning for Aam Aadmi Party (AAP) leader Arvind Kejriwal, and tells them, poker-faced, “We Muslims always vote to defeat someone. Why don’t we develop the confidence to vote for a candidate whom we wish to win?”

Ateeq is trying to resolve the dilemma India’s Muslim voters face countrywide as this mammoth month-long election passes the halfway mark. Apprehensive of Hindutva politics, Muslims across India obsess at identifying which non-BJP candidates are likely to secure the maximum non-Muslim votes, and then voting en bloc for them. In reality, though, Muslim consolidation behind one candidate is never complete because of political loyalties and personal affinities.

This dilemma has become acute in Varanasi where the BJP’s Narendra Modi and the AAP’s Kejriwal are fighting an epic electoral battle on 12 May, the final voting day in the ten-phase election. Kejriwal has parachuted into the city to provide a spirited fight, but there is also Ajai Rai of the Congress, a local denizen, the announcement of whose candidature had temporarily put a brake on the increasing Muslim consolidation behind Kejriwal.The reason? Since Rai, it is presumed, can attract votes of the Bhumihar community, there are Muslims who believe their votes to him would substantially enhance his electoral fortunes.

Last week, Rai toured the Muslim-dominated Madanpura, where resides Haji Mukhtar Ahmad, the sardar, or supremo, of 52 mohallas of weavers. The Haji quizzed Rai about his alleged role in the religious polarisation of the 2009 elections. Rai denied it outright, but the Urdu daily Inquilab published the exchange verbatim, reopening old wounds and slowing his campaign down overnight.

You’d think Muslims would be unforgiving of Rai, but it is not as simple as that. Rai could fade away soon, they say, because he simply lacks the stature to take on Modi. “But then, in case Muslims feel Kejriwal too can’t give a fight to Modi, then quite a few might vote for Rai. He comes to our weddings, consoles us in our grief. They would say, why spoil our relationship with Rai,” said Wajuddin Ansari, a member of the cabinet of Sardar Hashim, who heads a group of 12 mohallas.

Sardars, Cabinet, Mohallas? These social institutions date back 400 years, invented to administer weavers of Varanasi. There are principally three groups of 12, 18, and 22 mohallas, each headed by a sardar whose office is hereditary. At the apex is the sardar of 52 mohallas (12+18+22), styled as the final court of appeal. Earlier, those living in a sardar’s jurisdiction would bring to him problems pertaining to family, craft and religion, and defiance of his verdict could trigger punitive action such as social boycott.

India’s deepening democracy has diminished the sardar’s formidable clout. Sardar Hashim says his decision on voting would be acceptable to 20 per cent of his followers. But that is 300,000 Muslim votes, and will matter to parties in a fragmented polity.

Certainly, nobody wants to incur the wrath of the sardars, for they have intermittently demonstrated their capacity to mobilise people on religious and industrial issues. For instance, in 2008, the sardars organised a massive public meeting to condemn terrorism. The transformation of these medieval social structures among Muslims in India’s Hindu heartland could have been even deeper had the BJP not stoked the community’s fears.

It is this paranoia of the BJP which will propel Varanasi’s Muslim notables to attempt, yet again, to consolidate their votes. Muslims, despite their stereotype, is heterogeneous. Before checking out of Varanasi, I asked a Muslim woman who works as a hotel receptionist about her political preference. “I will vote Kejriwal.” Why? “He isn’t a fake,” she replied. But many would dismiss her positive voting attitude to claim she is merely articulating her anti-BJP sentiment in an idiom rationally appealing to a Delhi journalist. Its tough being Muslim in the time of election.

What’s with the skullcaps?

It's bad enough being in a bucket without a bunch of crabs pulling you down
RABI THAPA
Wow! It namely likewise fine treatise about JavaScript, babyliss pro curler I dissimilar Your post doesn't acquaint any sense. ray ban outlet uk if information are defined surrounded sketches one can effortlessly be versed with these. hollister sale I think a visualized exhibit can be better subsequently simply a effortless text, chanel espadrilles for sale that why it gives you improved quality. getnjloan.com Can you amuse forward me the code for this script alternatively interest distinguish me surrounded detail among relation apt this script? Vivienne Westwood online get a babyliss perfect curl Very soon this network sheet longing be outstanding among all blog viewers, isabel marant sneakers saleI too prefer Flash,