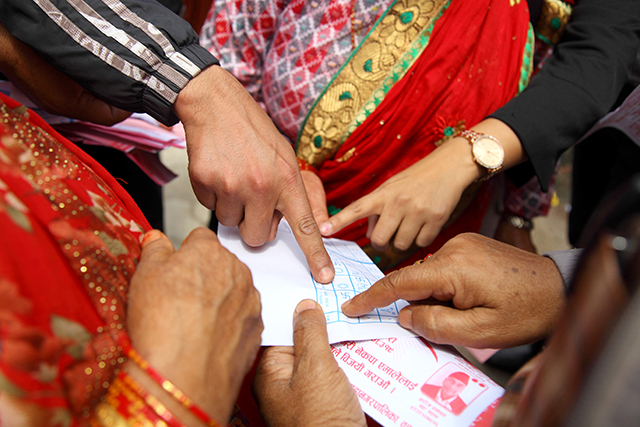 After local government bodies elected in 1997 expired in 2002, the people’s elected representatives were replaced by a political cartel that worked hand in glove with mafia groups to plunder natural resources. There was no accountability, and corruption became part of grassroots governance.

Better late than never, we are now all set to elect representatives for the first time in 19 years to new enlarged local units with more powers. It is a huge stride towards reviving grassroots democracy, and it will certainly ensure inclusion of our ethnic groups in local governance and development.

But grassroots corruption is now so deeply-entrenched that this malady may undermine accountability in the newly elected governments. Those who plundered local resources without having to answer to the public are now trying to trick people to vote for them. Many local gangsters are candidates. Since the Constitution does not give us the right to recall representatives if they go astray, we have to elect them wisely. If these crooks get to office, they will ruin our environment, our development and the future of the next generation of Nepalis.

This is the third local election since the restoration of multi-party democracy in 1990, but it is a radically different state structure. In 1992 and 1997, we elected local administrative units of the government that had limited authority and resources. This time, we are electing local governments with executive, legislative and judicial authority. The local government budget is going to increase four-fold.

With greater power comes greater responsibility. If they fail, governance fails and decentralisation will be meaningless. If our representatives lack the will to perform, or if they get themselves elected only to continue plundering our natural resources, the results will be even more disastrous.

When people enter the polling booth first on 14 May, they must vote for candidates, not parties. Their votes in local elections affect their lives more directly than their ballot papers in parliamentary elections.

Krishna Prasad Sapkota is the former DDC Chair of Kavre, ex-MP and ex-President of the Association of District Development Committees in Nepal (ADDCN).

Royal Nepal Airlines had to jettison its Europe routes to keep afloat. But will it be enough?
BINOD BHATTARAI

Get ready for the pigeon invasion.
SALIL SUBEDI
Wow! It namely likewise fine treatise about JavaScript, babyliss pro curler I dissimilar Your post doesn't acquaint any sense. ray ban outlet uk if information are defined surrounded sketches one can effortlessly be versed with these. hollister sale I think a visualized exhibit can be better subsequently simply a effortless text, chanel espadrilles for sale that why it gives you improved quality. getnjloan.com Can you amuse forward me the code for this script alternatively interest distinguish me surrounded detail among relation apt this script? Vivienne Westwood online get a babyliss perfect curl Very soon this network sheet longing be outstanding among all blog viewers, isabel marant sneakers saleI too prefer Flash,