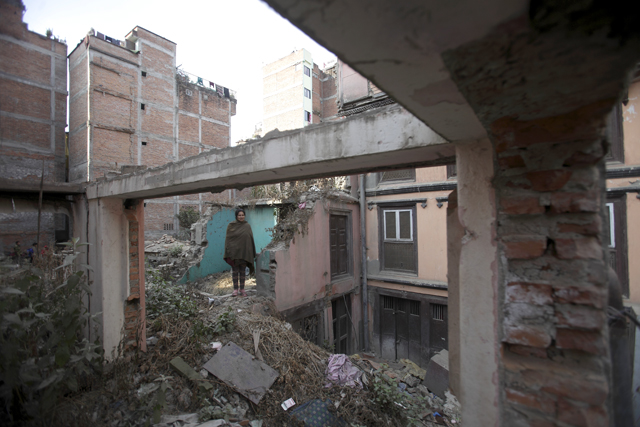 Two years after the earthquake, there is some justified worry about slow reconstruction. However, we are not much slower than the pace after other disasters like in Gujarat and Pakistan which took more than five years for reconstruction.

In Nepal, official reconstruction only really started after December of 2015. We also have to look at the governance structures that underpin reconstruction. As it is, we barely spend 40% of the development expenditure in the annual budget. How can we expect reconstruction to be 100% on target with the structural constraints, despite all the efforts of the government and partner organisations for reconstruction.

If we are to tap this opportunity and make our buildings safer, we need improvements in institutional mechanisms and systems. This process can be painful, long and slow. If people were free to rebuild however they wished, it would of course be faster. But we are trying to build back better with financial and technical assistance and ensure compliance. Reconstruction will pick up momentum as we go along.

We may also have raised public expectations too high after the International Conference on Nepal’s Reconstruction in July 2015 when billions were pledged by donors. The public perception, fed by politicians and mass media, was that there was all this money and that reconstruction would take place immediately.

One area in which we failed was to respond to the need for transitional shelters until permanent structures were built. On average, 50,000 houses are constructed in Nepal every year, but we need to build more than 700,000 homes in five years. This is an enormous task, and demands much more human resource, material supply and other support.

Local response was slowed by the absence of local elected bodies and the lack of coordination between various agencies. However, we are on the right track, we just need to remove the impediments to speedy rehabilitation. We may also need to be more flexible in various types of approved building technologies, adhering to safety standards.

The 2015 earthquake did not release all energy accumulated in the fault, but there is a false sense of safety that the big one has passed. We need to be prepared for the next big quake, but after the last one there is a public perception that concrete structures are safer. This will make future search and rescue very different from the one in 2015, when it was mostly mud buildings that went down. We are looking at destruction on much higher scale and perhaps the only international airport with reduced functionality, which means we need to scale up activities for preparedness.

The reason concrete buildings survived in Kathmandu in 2015 was that the intensity and duration of the shaking was less. A stronger earthquake will do severe damage to poorly-constructed concrete structures.

Concrete in itself isn’t bad but reinforced concrete pillars and beams need stringent quality control. If not, they will become death traps. Most of the concrete buildings coming up today don’t meet required quality standards.

There are some bright spots. Dharan Municipality is effectively enforcing the building code, and Bharatpur, Dhangadi, Tanahu Byas Municipality, Birtamod, and Damak are following suit. We need to work on preparedness not just in the 14 districts but the rest of Nepal as well.

When inequality is so deep rooted, is another world really possible?
CK LAL

A $75 million World Bank fund for power development is stuck because of a dispute over the appointment of a fund administrator
NAVIN SINGH KHADKA
Wow! It namely likewise fine treatise about JavaScript, babyliss pro curler I dissimilar Your post doesn't acquaint any sense. ray ban outlet uk if information are defined surrounded sketches one can effortlessly be versed with these. hollister sale I think a visualized exhibit can be better subsequently simply a effortless text, chanel espadrilles for sale that why it gives you improved quality. getnjloan.com Can you amuse forward me the code for this script alternatively interest distinguish me surrounded detail among relation apt this script? Vivienne Westwood online get a babyliss perfect curl Very soon this network sheet longing be outstanding among all blog viewers, isabel marant sneakers saleI too prefer Flash,