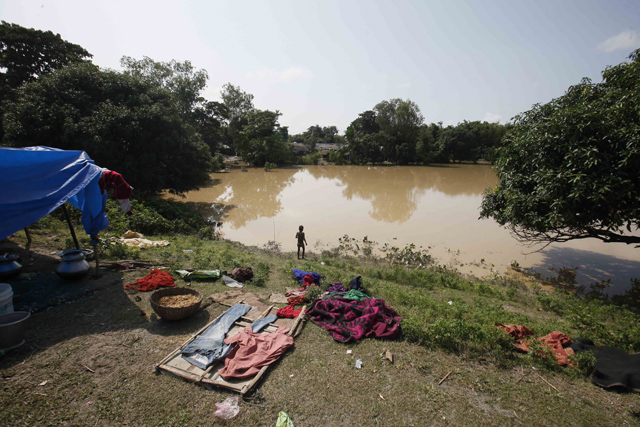 Floods have been part of the life and livelihoods of the people living in the Indo-Gangetic plains for millennia, though written historical records of large floods only exist starting in the 17th and 18th centuries. Understanding the hydrology of South Asian rivers is critical to deepening our understanding of floods. The bottom line is that floods occur when a river channel is filled with water. This often happens during the monsoon season, when more than 80% of annual rainfall arrives in just four months. As long as the Himalayan range forms a barrier for rain clouds moving in from the Bay of Bengal, the monsoon will continue to bring floods. Within Nepal, however, there is great variation in the amount and intensity of rainfall.

Recent advances in meteorology and weather system science have helped us to better understand the causes and movements of the monsoonal troughs that create heavy rainfall in different parts of the country. The movement of similar troughs caused the cloudbursts that unleashed catastrophic floods in central Nepal in 1981 and 1993. In 1981, a weather station in Godavari, Lalitpur got 169mm of rain in 24 hours, while in 1993, 540mm of rain fell in over 24 hours in Tistung in the Kulekhani watershed. More than 1,000 people lost their lives in the resulting floods, critical infrastructure like roads, bridges, hydropower stations and irrigation barrages and canals were damaged, and the livelihoods of hundreds of thousands of people were in jeopardy.

Nepalis have always suffered from monsoon floods, and many factors indicate that they will worsen in the future as climate change causes our weather systems to alter and we continue down dangerous and unequal development pathways. Our response to such disasters remains focused on reactive rescue and relief activities, which unfortunately often get politicised. As a society and a nation, we have failed to shift our efforts towards reducing risks by proactively preparing for the next disaster.

Poor planning and a lack of understanding of risks, as well as of the natural flow of rivers, are why current and future floods will be more destructive than past ones. We must learn from the past to minimise the loss and destruction from future disasters. Instead, we seem to keep repeating mistakes that have brought death and destruction. Aiming to control floods, we have jacketed rivers by building embankments without serious attention to local hydrology, resulting in waterlogging of the land along riverbanks. These rivers regularly breach with severe consequences for local people, who live with a false sense of safety because of the embankments. When we construct new roads, we ignore how they may exacerbate future floods by blocking natural drainage channels. When we pave over surfaces with concrete and asphalt, we rarely build the needed drainage.

Unlike some places in the world that face only one type of hazard, Nepalis must learn to live with multiple and regular hazards likes floods, landslides, droughts and earthquakes. This means that minimising disaster risk should become a central part of our development journey.

Recently elected local councils must swing into action to develop disaster management plans for local communities. Early warning information about floods must reach the most vulnerable in risk areas, and we must have systems in place to help them minimise the impacts from such floods. Immediate relief and rescue efforts are critical to save lives and property. But only by preparing now can we ensure that we have the mechanisms and systems in place to prevent a flood from turning into a large-scale disaster.

Ajaya Dixit is a water expert with the Institute for Social Environmental Transition Nepal (ISET-N).