Obor, or not obor?

Can the convergence of US-India interests contain China? 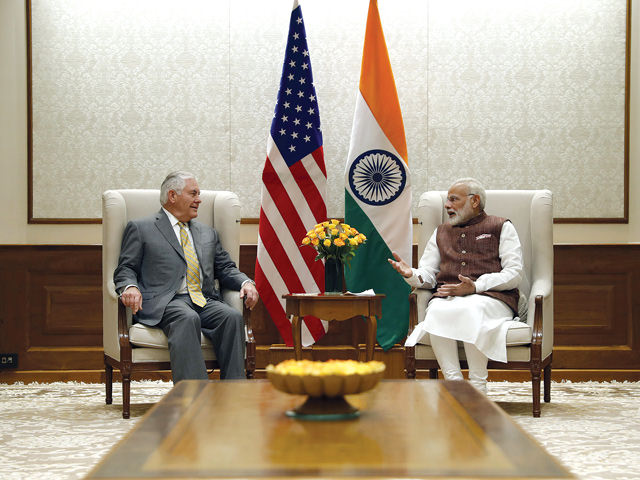 NEW DELHI -- India and the US are increasingly finding points of convergence on strategic partnership on security and development in the Indo-Pacific region, but will this be able to contain China’s rise they hope it will?

During his India visit to New Delhi this week, United States Secretary of State Rex Tillerson suggested that the world’s two largest democracies should partner to build road connectivity in the Indo-Pacific region, as a kind of an alternative to the Chinese One Belt, One Road (OBOR).

Such an initiative will invariably include Japan and Australia as well, which are also wary of China’s rising power in Asia and globally. Tillerson is learnt to have pushed for road connectivity also with Bangladesh and Afghanistan, so that even Pakistan could be persuaded to join in.

In addition, the US has already acknowledged India’s role in reconstruction of war-torn Afghanistan and is very critical of Pakistan for its perceived reluctance to combat terrorism. The US has repeatedly offered to help enhance India’s military capacity through sale of military hardware.

There is expected to be deepening Indo-US collaboration in military, terrorism and trade, but balancing China seems to be the real objective of the Trump administration’s new South Asia Policy.

OBOR is China’s ambitious project to build a ‘New Silk Road’ of ports, railways and roads linking Asia, Africa and Europe. India is opposed to it mainly because one of the components of OBOR runs through a disputed part of Kashmir. The US threw its weight behind India’s opposition to that $60 billion China-Pakistan Economic Corridor (CPEC), and earlier this year skipped China’s the Belt and Road Forum summit due to its sovereignty concerns over CPEC.

The US believes that OBOR is China’s way of securing control over Asia in an eventual hope of dominating Eurasia and exploiting natural resources -- directly against the US policy and interests. Any effort by China and Pakistan to come closer will therefore be resisted by the Americans. Of late, the US has put increasing pressure on Pakistan, even threatening cut military assistance if it fails to crack down on terrorist havens inside its territory.

The increased polarisation will prompt China to trigger more confrontations in South Asia like the recent standoff at Doklam on its border with Bhutan. China feels that its relation with any country is not at the expense of any other, and that should be true for India’s relation with the US or Japan as well.

Beijing has warned against attempts to ‘contain’ China through steps such as US weapons sale to India or groupism in the region. But with its technology and resources, it will be difficult for India to stop China’s rise. Beijing has already got Nepal, Sri Lanka, Bangladesh besides Pakistan to sign up to OBOR, which automatically makes them its strategic partner in connectivity and development.

China will continue supporting Nepal’s development and expects to become a key stakeholder. This message was conveyed to Foreign Minister Krishna Bahadur Mahara and Vice President Nanda Bahadur Pun during visits to China in July, and when Speaker Onsari Gharti Magar went to China to participate in the 2017 Euro-Asia Economic Forum. Besides aid in infrastructure, China wants to build key linkages with the Nepal Army, which was a message relayed during Chinese Vice Premier Wang Yang’s visit to Nepal in August and Chinese Defense Minister Chang Wanquan’s trip in March.

Nepal’s policy of equidistance between its giant neighbours will be severely tested by this new development in Indo-US ties, which also includes Japan. An alternative to OBOR could soon be in the offing which Nepal will not be able to stay out of.

As it is, Nepal’s hurried acceptance of OBOR in May was not to India’s liking. New Delhi officials have since warned Nepal’s leaders of falling into a debt trap with China much in the way Sri Lanka has.

It isn't just Nepal that's new, GPK and PKD have also reinvented themselves
PURUSHOTTAM DAHAL
Wow! It namely likewise fine treatise about JavaScript, babyliss pro curler I dissimilar Your post doesn't acquaint any sense. ray ban outlet uk if information are defined surrounded sketches one can effortlessly be versed with these. hollister sale I think a visualized exhibit can be better subsequently simply a effortless text, chanel espadrilles for sale that why it gives you improved quality. getnjloan.com Can you amuse forward me the code for this script alternatively interest distinguish me surrounded detail among relation apt this script? Vivienne Westwood online get a babyliss perfect curl Very soon this network sheet longing be outstanding among all blog viewers, isabel marant sneakers saleI too prefer Flash,