Giving in to Gorkhaland 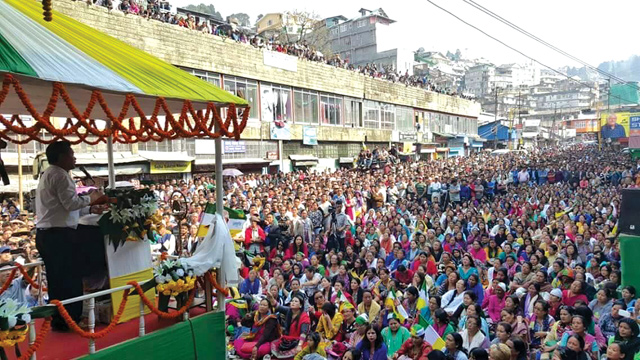 The indefinite strike called by the Gorkha Janmukti Morcha (GJM) in the hills of Darjeeling has entered its third week and its supporters show no sign of retreat or relent.

Under its fiery leader Bimal Gurung, the GJM has quit the Gorkhaland Territorial Administration (GTA), the quasi-autonomous administrative council formed in July 2011. The GJM was heading that body till recently, and now wants to push for a Gorkhaland state separate from Bengal.

The demand is a century old, dating back to British India. This time, emotions boiled over when the Bengal government decided to make the Bangali language mandatory in schools in the mountains, where most people are Nepali-speaking. Three people were killed when paramilitary forces fired on protesters, and there has been much property damage.

The region bordering Nepal’s Ilam and Jhapa districts appears to be headed for prolonged unrest given the conflicting interests of the major political stakeholders. There is the BJP government in New Delhi, the Trinamool Congress (TMC) in Bengal and the GJM itself.

The BJP is wary of the Gorkhaland demand primarily because of the experience of Telangana. It was carved out of Andhra Pradesh in 2014 and the United Progressive Alliance government paid a heavy price in elections that followed.

Although the BJP has a history of supporting state bifurcations, and as the National Democratic Alliance presided over the formation of Jharkhand, Chhatisgarh and Uttarakhand in 2000, it is cautious about a repeat of the Telangana experience in Gorkhaland, especially at a time when it is making great efforts to dislodge TMC leader Mamata Banerjee in Kolkata.

Bengal has 42 Lok Sabha seats and the BJP may not be willing to risk its political ambitions in such a large state. Although it is tempted to back the agitation in Darjeeling to needle Banerjee, it knows that splitting off Gorkhaland would be deeply unpopular among Bengalis in the plains.

BJP leaders have pointed out that they never included statehood for Gorkhas in 2009 or 2014 election manifestos. Union Minister and Darjeeling MP SS Ahluwalia has blamed Banerjee’s divisive policies for the current crisis. “Gorkhaland is an old demand and a solution cannot be delivered overnight,” he said.

The BJP’s general secretary Kailash Vijayvargiya has also said that the BJP “cannot support a separate Gorkhaland state”. Banerjee has stood firm against Gorkhaland, treating it as a law and order problem, and turning the issue into one of Bengali pride and sub-nationalism. She has called GJM supporters “insurgents,” even after withdrawing the decision to make Bangali compulsory. Despite spiralling tensions in the hills, she went on a tour of the Netherlands just to show her disdain for the demand.

Although the agitation has united disparate Gorkha groups, Bimal Gurung distrusts the Gorkha National Liberation Front (GNLF) and the Jan Andolan Party. He said last week: “There is no guarantee that they will not ditch the Gorkhaland demand midway.”

Gurung rose to the GJM after falling out with his mentor and GNLF chief Subhash Ghising, who spearheaded the Gorkha agitation in the 1980s that claimed 1,200 lives.

India’s national media has carried extensive event-based reporting of the agitation, and tried to be balanced. A few strong op-eds in favour of Gorkhaland have also been published, but the GJM blame the media for “siding with the state and the centre” and also for misquoting Gurung.

What makes the agitation sensitive from a security perspective is that many Gorkha veterans from the Indian Army have spoken out on social media in support of Gorkhaland autonomy and denounced the suppression of the protests. Military sources say it is “an emotive issue that could cause problems” for the Indian establishment.

There are 40,000 Gorkhas in 40 battalions of seven regiments of the Indian Army. Forty percent of them are Indian Nepalis from Uttarakhand, Himachal Pradesh, the North-East, Sikkim and Darjeeling, and the rest Nepali nationals. The agitation therefore needs to be handled with care not just because of the sentiments of Nepali-speakers in India but also for bilateral relations with Nepal.

For decision makers in New Delhi, the Gorkhaland demand is one of inadequate autonomy, and thus the focus will now shift to further financial and political devolution to the GTA. Besides the political implications for the BJP in West Bengal, there are also security concerns because of the strategic location of the Darjeeling hills and its geopolitical ramifications.

The state of real estate

The highs and lows of high-rise living
PAAVAN MATHEMA

Interview with Suraj Vaidya, President of Federation of Nepalese Chambers of Commerce and Industries (FNCCI), 4 September

Editorial , 7 September
Wow! It namely likewise fine treatise about JavaScript, babyliss pro curler I dissimilar Your post doesn't acquaint any sense. ray ban outlet uk if information are defined surrounded sketches one can effortlessly be versed with these. hollister sale I think a visualized exhibit can be better subsequently simply a effortless text, chanel espadrilles for sale that why it gives you improved quality. getnjloan.com Can you amuse forward me the code for this script alternatively interest distinguish me surrounded detail among relation apt this script? Vivienne Westwood online get a babyliss perfect curl Very soon this network sheet longing be outstanding among all blog viewers, isabel marant sneakers saleI too prefer Flash,