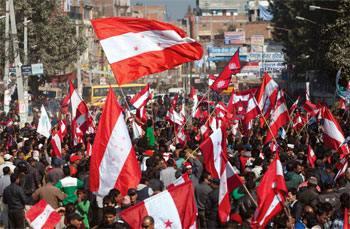 BIKRAM RAI
There is a tipping point in every crisis, and in the case of the Nepali Congress it could not have come at a more inappropriate time. For too long the NC top brass had been forestalling the party’s internal crisis, but they cannot do that anymore because this time it is not just their own party they are holding hostage.

After Sushil Koirala was elected president at the party’s general convention in 2011, it was assumed that his clean image would keep in check the naked ambitions of his senior colleagues and hold the party together.

When interviewed in 2012, the grand old man of the grand old party had told me he had no ambitions for power, he just wanted to strengthen internal democracy. Despite Pushpa Kamal Dahal’s luring invitation to lead the government, Koirala had made it clear that he did not want to be the Prime Minister.But that was then.

Today, Koirala has been lobbying inside the party, trying his best to convince everybody why he should be allowed to lead the government, as well as keep the party presidency, a strategy championed by his brother late Girija Prasad Koirala. This stems from fear inside Koirala’s small coterie, mostly other Koiralas and loyalists, who see the NC leadership as the family inheritance it has been for 70 years.

Although Sushil Koirala's poll ratings are high, he does not command popular support inside the party like his brother did. The party general convention in six months will most certainly see the end of Koirala domination both in the NC and in Nepali politics. So, it does make sense for him to insist on prime ministership, and relinquish the party presidency.

The next in line for PM is Ram Chandra Poudel, who is waiting for an opportunity to redeem himself from the ghosts of humiliating 17 failed attempts at premiership in Constituent Assembly votes in 2012. An NC insider admits that Poudel has offered his loyal support to Deuba for the party presidency, should Deuba support his candidacy for PM.

Deuba is spoilt for choice here. He can bargain with Koirala for the PM post in exchange for party presidency but he also has Poudel’s offer on the table. Under mounting pressure, the three leaders finally held a meeting on Wednesday where Koirala reportedly made a win-win offer to both Deuba and Poudel, that will allow him to have his cake and eat it too.

In case, Koirala does become Prime Minister, chances are that he may have to leave presidency to Poudel who is also next in line for the post, and offer all major portfolios in the next government to Deuba's nominees. But knowing that he has a bright chance in the next general convention, Deuba may just be tempted to be prime minister for the fourth time.

Even after becoming the largest party in the November elections, the NC faces more challenges from within than from outside in forming the government. The trifurcate power struggle inside NC that remained unresolved after the party’s general convention three years ago, has come to haunt the leadership.

Despite repeated calls by senior party leaders, and youth leaders like Gagan Thapa and Chandra Bhandari to resolve all issues democratically through broader consultation inside the party, Koirala finalised the party’s PR list by carving it out 60-40 between himself and Deuba.

Once again, the top three leaders are sitting behind closed doors, striking deals to suit their personal ambitions. The ‘package deal’ will most probably finalise not just who gets to lead the government, but also who bags plum cabinet posts. Chances are, camp leaders and greedy kingmakers flaunting ‘foreign support’ will once again prevail over young, visionary leaders with charisma and integrity.

When the NC-led government is sworn in soon, it will be hailed as a glorious comeback for the party that has historically led Nepal’s democratic struggles. Only a handful of insiders will know how hollow its internal democratic credentials are. But that’s democracy for you.

The luminous colours, when mixed together, turned ashen as this vivid teaching on impermanence came to an end.
MANJUSHREE THAPA

Meet Moti Lal KC, proprietor of Lucky Armani Tailors in Phuket.
MIKE GILL
Wow! It namely likewise fine treatise about JavaScript, babyliss pro curler I dissimilar Your post doesn't acquaint any sense. ray ban outlet uk if information are defined surrounded sketches one can effortlessly be versed with these. hollister sale I think a visualized exhibit can be better subsequently simply a effortless text, chanel espadrilles for sale that why it gives you improved quality. getnjloan.com Can you amuse forward me the code for this script alternatively interest distinguish me surrounded detail among relation apt this script? Vivienne Westwood online get a babyliss perfect curl Very soon this network sheet longing be outstanding among all blog viewers, isabel marant sneakers saleI too prefer Flash,