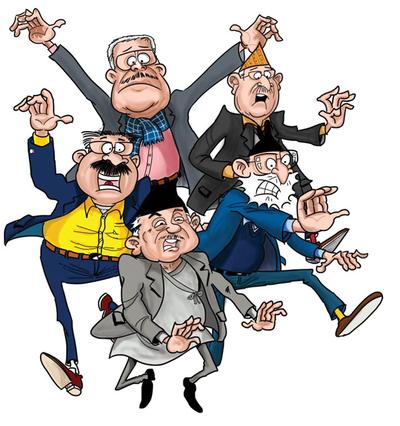 Hundreds of thousands of people across 15 districts affected by the April earthquake are still awaiting food, shelter and medicines. But what are they discussing in the corridors of power in Singha Darbar these days? Who gets to be the next prime minister and when.

A national crisis of this magnitude should have put the government and its agencies at its efficient best and united political forces across the spectrum. But politics is a hard ball game of power, and crisis provide all an opportunity to make political capital.

All the Maoist chairman Pushpa Kamal Dahal had to do was stoke KP Oli’s ambition to become prime minister to change the current discourse of Nepali politics.

Prime Minister Sushil Koirala’s own goal may have been to be at the helm when the constitution is drafted, take credit for it and then make a graceful exit. But the earthquake has shaken things up.

The Maoists sniff advantage that putting an ailing Oli in power will open opportunities for them because they know Comrade KP is a man in a hurry. However, sections of the NC see no reason to handover to Oli right now since the gentleman’s agreement was that Koirala will step down only after the constitution.

Which is why they are now racing the clock to try to ram through a constitution. But what after that? A national reconstruction government led by Oli has set off competition for power sharing. The long-term political capital to be gained during this period means everybody wants just a little bigger share of the pie. With local elections looking probable by the end of the year, there is fierce competition for powerful ministerial berths.

The NC, UML and the opposition Maoist-Madhesi alliance have intensified in the past few days, most kinks in the constitution are being ironed out. Unlike in the past, federalism and the governance are not the sticking points anymore. The eagerness shown by the Maoists and a section of Madhesi alliance to jump into Oli’s bandwagon means that Maoists do not see their stance on statute yielding them any political brownie points. Instead, a visible role in the national reconstruction government may just be what Dahal and his comrades are looking for to regain lost political stature.

A senior NC leader told me this week: everybody wants to get the constitution over and done with. Sushil Koirala wants to take credit and cash it in the coming party convention. Sher Bahadur Deuba wants Koirala out of power before the convention to give himself a fair chance. Oli can’t wait to be PM, Madhav Nepal is backing Oli because that would fulfil his dream wish to head the UML.

By standing up for inclusive federalism, the Maoists and the Madhesis were fighting for their share of political credit in the statute drafting. But, being in a national reconstruction government is a much more attractive proposition now. The NC and UML also seem to have realised that bringing the opposition into a national government is the best way to ensure local elections.

Some sections within the Maoist-Madhesi alliance will caution the leadership against joining the government at the moment, but pragmatism may prevail. Or, call it opportunism.

The estimated costs for reconstructing the quake hit economy are already running into billions – of dollars. But it is an indication of the lack of credibility of the government that contributions to the Prime Minister’s Relief Fund have been disappointing.

Whatever remains will soon run out after the government starts distributing cash compensation next week. The government sees the 25 June Donor summit as an opportunity to convince donors to contribute to the PM Relief Fund. But the brewing humanitarian crisis in Syria, Iraq and several parts of Africa will leave Nepal at the bottom of the donors’ priority list. So, the best chance we have for funding this long term reconstruction is to get the economy back in shape, which will require a stable government.

The aftershocks may have stopped shaking of the crust beneath our feet, but we still stand on shaky political terrain.

Taking the people for granted

Social entrepreneurs are businessmen with motives beyond money
PAAVAN MATHEMA

There has been a sharp rise in the arrival of Chinese tourists to Nepal
CAI YUN
Wow! It namely likewise fine treatise about JavaScript, babyliss pro curler I dissimilar Your post doesn't acquaint any sense. ray ban outlet uk if information are defined surrounded sketches one can effortlessly be versed with these. hollister sale I think a visualized exhibit can be better subsequently simply a effortless text, chanel espadrilles for sale that why it gives you improved quality. getnjloan.com Can you amuse forward me the code for this script alternatively interest distinguish me surrounded detail among relation apt this script? Vivienne Westwood online get a babyliss perfect curl Very soon this network sheet longing be outstanding among all blog viewers, isabel marant sneakers saleI too prefer Flash,