The Indian Blockade is a reality, but so is the three-month Madhes agitation 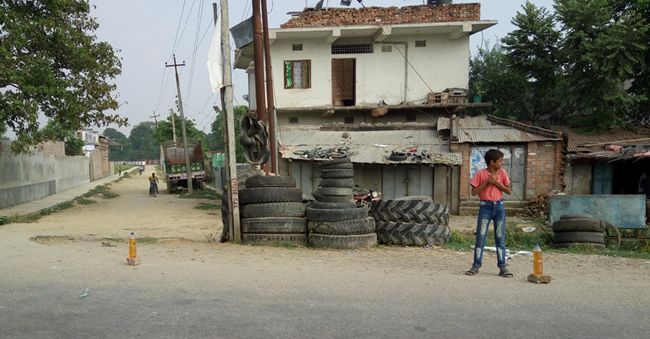 We now have two women in senior positions: the UML’s Bidya Devi Bhandari is the second president of Nepal and former guerrilla Onsari Gharti is the first woman to chair parliament.

For a nation in the throes of political transition, this is by no means a small achievement. But, as with promulgation of the constitution last month, the celebrations have been dampened and few outside Kathmandu are bothered.

From remote mountains ravaged by the April earthquake to the barren farms of the Tarai hit by the bad monsoon and more than three months of continuous unrest, there is anger against government apathy.

Feroz, 43, runs a footware shop in Biratnagar and has to feed a family of nine. For the last two months, his business is down by half because his raw materials are stuck at the border.

“I do not understand politics, but there are people on the streets protesting for over two months. Some of them I know are good people, and if they are on the streets, I guess there is a reason for it,” he says.

Fifty km away, thousands of people from hill communities in Rajbiraj of Saptari took part in a rally in solidarity with the Madhes movement. “We have witnessed deaths and people have endured much pain in the last two months, we hope to calm communal tension,” local journalist Jitendra Thakur told me.

What began as a small protest by some disgruntled Madhesi leaders in August has grown into a mass movement, gaining support from all walks of life in the plains. From the innovative ‘dhoti rally’ to creating a human chain, hundreds of thousands are on the streets.

Kathmandu’s ruling class and the media have largely ignored this, reacting only to the Indian blockade which has created crippling shortages. In an op-ed a few weeks before the constitution was promulgated, Prof Krishna Khanal had warned: “Leaders who immediately addressed demands of protesters in Karnali and Surkhet and even Thori VDC, will have to answer why they have been ignoring the demands of Madhesis and Tharus.”

None of the top leaders are comfortable explaining the rationale of the current arbitrary federal demarcation. Nor are they willing to accept that the discriminatory citizenship provisions in the new constitution could create a new generation of stateless citizens.

To be sure, the Indians have made undiplomatic moves, expressing reservations on several clauses in the draft constitution, including secularism. The de-facto blockade is indeed a continuity of its ‘carrot and  stick’ approach. But Kathmandu has nobody but itself to blame for alienating Madhesis, pushing them into New Delhi’s arms.

“We have already got ourselves into a diplomatic mess, so has India, and there is no other way for the two countries but to try and normalise relations,” says former ambassador to India, Bhekh Bahadur Thapa. “But this is our internal problem and the government must seek political reconciliation within, by reaching out to the dissenting parties. Both processes must move in parallel.”

Diplomatically, the MoU signed between Nepal and China this week will end India’s historical monopoly over Nepal’s petroleum market. In the long run, this will be in our national interest, but for the moment it will serve only to irritate Delhi further.

Nepal cannot afford to antagonise either of our giant neighbours, not just to ensure an uninterrupted international trade, but also to take economic advantage of our location between India and China.

So, instead of playing one against the other, K P Oli must strive to achieve a diplomatic balance on either sides of the Himalaya. We may have burnt our hands dealing with India, but it makes no sense burning our bridges also.

In the rain shadow

Instead of telling tourists not to visit Nepal in the monsoon, we should be marketing it
BILLI BIERLING in MANANG
Wow! It namely likewise fine treatise about JavaScript, babyliss pro curler I dissimilar Your post doesn't acquaint any sense. ray ban outlet uk if information are defined surrounded sketches one can effortlessly be versed with these. hollister sale I think a visualized exhibit can be better subsequently simply a effortless text, chanel espadrilles for sale that why it gives you improved quality. getnjloan.com Can you amuse forward me the code for this script alternatively interest distinguish me surrounded detail among relation apt this script? Vivienne Westwood online get a babyliss perfect curl Very soon this network sheet longing be outstanding among all blog viewers, isabel marant sneakers saleI too prefer Flash,