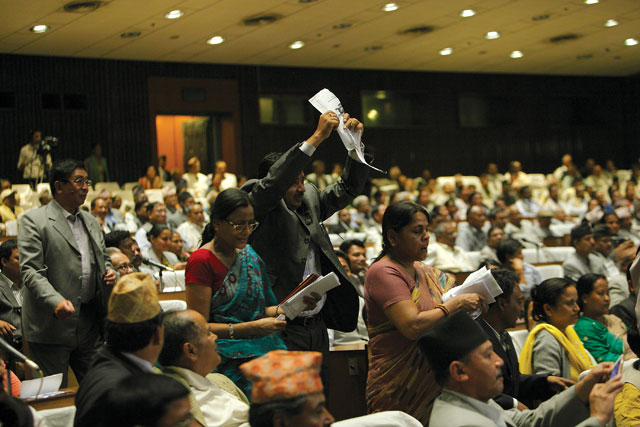 After seven years of enduring transition, when the Constituent Assembly of Nepal tabled the draft constitution this week, the entire nation should have celebrated. Instead, the document was torn to pieces inside the CA and torched in several districts around the country.

Going through the 120 pages divided into 36 chapters and 296 articles, one can safely say this is not a badly written draft. But it has some really dubious, if not objectionable provisions that reek of paranoia and xenophobia.

The good stuff first. There are elaborate directive principles of state policy which are motherhood and apple pie issues. Provisions like Article 35 boldly allow victims of environment pollution to sue wrongdoers. Article 36 makes basic education compulsory, while provisioning free secondary education for all. This must be matched by an equally bold education policy that guarantees high quality in public education, but first things first.

Sadly, the draft falls short on guaranteeing free quality state health care for all, escaping with the platitude of free primary health care. It is no secret that some of those involved in statute drafting are among the biggest investors in the country’s hospitals. The conflict of interest clearly shows.

But it is the second part of the constitution that lays out citizenship provisions that exposes the full paranoia of the drafters. For long women and the Madhesis have been treated as second class Nepalis, deemed unfit to acquire or unconditionally pass on citizenship to their children, because men in power cannot get over their obsession about the ‘purity of the Nepali male blood’. A third class citizenship provision that denies children of Nepali mothers married to a foreign national (read: Indians) from exercising equal rights in this land defeats the very purpose of the sovereign exercise.

The missing puzzle to Nepal’s citizenship debate is tied to the uncomfortable question of the open border, which even the victims of these provisions dare not raise. Ultimately, it is the state’s responsibility to identify and confer citizenship to those qualified and not punish legitimate citizens.

A stateless Madhesi citizen is disqualified from accessing public services including water, electricity, education, banking, etc. They are neither qualified for formal employment, nor can they apply for business loans or have land rights. The only thing they pass on to their children is their statelessness.

The numbers may be debatable, but there are many stateless citizens in this country who are vulnerable to all kinds of exploitation including political, and their number will grow if and when this draft comes into effect.

Then, there is the contentious Article 60, which threatens to indefinitely postpone the full exercise of the new constitution. By deferring federal demarcation to a future commission, the drafters are dragging the nation into a new interim order since most of the provisions of the constitution will remain dysfunctional in its absence. For seven years, we endured a protracted transition, only to be pushed back into another transition which has no time frame.

When I met lawyer Dipendra Jha few days back, he was preparing to lodge a contempt case against 601 CA members, Speaker and the Chair of Draft Committee for violating the Supreme Court verdict that had stayed implementing the 16-point agreement that served as a basis for statute drafting.

Article 138 of the Interim Constitution clearly mandates this Constituent Assembly with the task of taking final decision on state restructuring, Jha told me. But the 16-point agreement outsources this decision to the legislature parliament. But the UML’s Agni Kharel, who is among the drafters, dismisses such charges and says the four parties will try to vacate any legal charges.

Meanwhile, all Madhes-based parties except Bijay Gachadar’s MJF-Loktantrik have taken to the streets. As the copies of the draft constitution were being torched by small group of Madhesi leaders and activists at Babar Mahal on Wednesday, Sadhbhavana leader Laxman Lal Karna warned that if the big parties try to bulldoze through the constitution in its present state he would disown it.

In the coming weeks, the Constituent Assembly will deliberate upon the draft and take it to the public for opinion. The drafters must listen carefully to what the people have to say and be open to amendments.

Last time the architects of the Interim Constitution ignored moderate voices, extremists gained ground in Madhes. That mistake should not be repeated.

"It has to be reciprocal"

Say it in Nepali

Alienated from Nepali, half-related to English, we grew up owning neither this nor that
SHRADHA GHALE
Wow! It namely likewise fine treatise about JavaScript, babyliss pro curler I dissimilar Your post doesn't acquaint any sense. ray ban outlet uk if information are defined surrounded sketches one can effortlessly be versed with these. hollister sale I think a visualized exhibit can be better subsequently simply a effortless text, chanel espadrilles for sale that why it gives you improved quality. getnjloan.com Can you amuse forward me the code for this script alternatively interest distinguish me surrounded detail among relation apt this script? Vivienne Westwood online get a babyliss perfect curl Very soon this network sheet longing be outstanding among all blog viewers, isabel marant sneakers saleI too prefer Flash,