Sushil Koirala may become the next Prime Minister, but he is already a lame duck 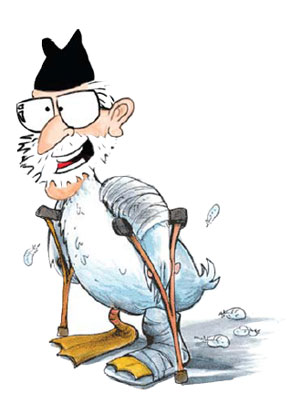 After weeks of political tongue-lashing and back-stabbing, the Kangresis finally put an end to their own misery and elected Sushil Koirala as their parliamentary party leader. He is also party president and may now also become prime minister, so the man is set to lead the government and carry forward the legacy of absolute control championed by his cousin before him. But will he succeed in delivering the constitution within the stipulated one year? We will let you know when we find out for sure.

Entering Singha Darbar will be the easy part for the 74-year-old ailing leader, who faces hostile opposition not just outside, but within his own party. His clean image plays in his favour in a party of greedy power wielders. But leaders with clean images have fallen from grace before, which shows that honesty and personal integrity alone do not guarantee successful leadership in politics. It involves pragmatism and ability to make tough calls that are unpopular, but knowing they are essential.

Despite his clean image, for example, Baburam Bhattarai failed as prime minister because he wasn’t able to take those tough decisions when it came to the peace process and had surrounded himself with crooks in the cabinet which made him preside over the plunder of the state exchequer.

Koirala defeated Sher Bahadur Deuba fair and square on PP leadership voting. But it is unlikely that he will get the needed support from Deuba to lead the government. We have seen Girija Prasad Koirala bring down his own party’s government led by Krishna Prasad Bhattarai in 2000, while Deuba himself split the party in 2002 to remain in power. If he fails to capture party presidency in the next convention, which is in six months time, Deuba will not hesitate to do either.

Even if Sushil Koirala manages to temporarily overcome obstacles within the party to lead the government, he will have to bargain hard with potential partners in the UML, which is eying all top posts including Home Ministry and Finance Ministry. Although UML leaders are themselves divided over who would lead the party in parliament, they will come down hard on Koirala where dividing portfolios is concerned.

For now, KP Oli looks strong enough to bag the PP leadership. If that happens, the UML will probably pitch Bam Dev Gautam for home minister. Yes, the same chap who won them the last local elections in 1997. But Madhav Nepal’s ambition to become the next president is already an irritant that Koirala will find hard to deal with, especially because the UML (read Nepal) is seeking some kind of assurance that the NC will support its presidency bid by next year. Koirala will be hard pressed on that since President Ram Baran Yadav seems unwilling to step down before the constitution is drafted.

Good news for Sushil Koirala is that the Maoists and Madhesi parties are still busy licking the wounds of their electoral defeat and won’t create much problem as far as government formation is concerned. Bijay Gachhadar’s MJF Loktantrik is the only one interested in joining the Congress in the government. But if all goes well with the UML, Koirala won’t need his support either.

There are plenty of theories doing the rounds in Kathmandu’s cocktail circles about whether or not Sushil will become the next elected head. My personal favourite conspiracy theory is the ‘foreign hand’, which states that the old man’s cold war with New Delhi has not thawed.

Yes, Koirala isn’t exactly popular down south and Delhi would have liked to see the pliable and pragmatic Deuba, for whom they rolled the red carpet last year, come to power. But, we have seen India’s capacity to influence Nepal’s chaotic politics wane in recent years. What they have managed to do successfully, though, is to find a way of addressing their key interests in the country by working with whoever comes to power in Singha Darbar. If they could hit it off so well with the Maoists, one presumes doing business with Koirala won’t be so difficult.

It may seem improbable for now, but the NC and UML will finally agree on forming a coalition government, not just because they don’t have a better choice. The two parties have a similar stance on outstanding issues of constitution drafting and will be seen close even inside CA. But the final negotiations on government power sharing will take some time to materialise. Things may become clearer in the second week of February.

Valentine's Day is more than a just dinner date for those who've overcome geography, society and plain shyness for love

Immersive or embedded? Kathryn Bigelow's excellent The Hurt Locker is a moral minefield in itself
A. ANGELO D'SILVA

Highway will bring Nepal and Tibet 'in from the cold'
JOANNA JOLLY, BBC in RASUWA

Roses are red, violets are blue, trash is dumped, and so are you
RABI THAPA
Wow! It namely likewise fine treatise about JavaScript, babyliss pro curler I dissimilar Your post doesn't acquaint any sense. ray ban outlet uk if information are defined surrounded sketches one can effortlessly be versed with these. hollister sale I think a visualized exhibit can be better subsequently simply a effortless text, chanel espadrilles for sale that why it gives you improved quality. getnjloan.com Can you amuse forward me the code for this script alternatively interest distinguish me surrounded detail among relation apt this script? Vivienne Westwood online get a babyliss perfect curl Very soon this network sheet longing be outstanding among all blog viewers, isabel marant sneakers saleI too prefer Flash,