The NC and UML have a two-third majority, but they need a consensus on the constitution 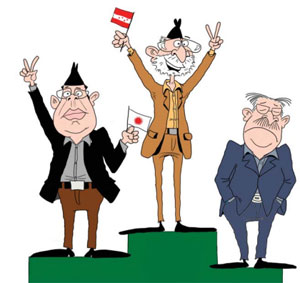 DIWAKAR CHETTRI
The initial euphoria over election results has now been replaced by a sobering reality that the voting was the easy part. Vermilion rallies have been held and those in mourning are taking their time coming to terms with the verdict.

Whether or not there was systematic fraud in the election process as alleged by the UCPN (M) and the Madhes-based parties, is now irrelevant. The NC and UML cried foul in 2008, but were forced to accept the results in the end and the Maoist-Madhesi parties will also have to swallow the bitter pill and move on.

Candidates who suspect anomalies can complain to the Election Court, but by threatening to boycott the CA and refusing to accept poll results, the Maoist and Madhesi parties are showing political immaturity and tarnishing their own democratic credentials. The sooner they realise this and move on, the better for them and us.

In the past two weeks, mainstream media hasn’t been able to hide its glee at the victory of the NC and UML and hailed it as a triumph of the nationalist and democratic forces construing Maoist and Madhesi parties’ loss as a defeat of ethnic and regional politics. On the other side, there were dark allegations of systematic cheating by the Army, EC, and India by pro-Maoist op-ed writers. There was very little balanced and dispassionate analysis about the poll results and how it will impact constitution drafting.

It is a matter of perspective whether people voted against the Maoists and Madhesi parties, or they voted in favour of the NC and UML. But it is clear that the perception of rot at the top of the Maoist leadership and the bad press over sheltering war criminals on both sides contributed to their defeat.

A few weeks before the elections, we compared the party manifestos in this column and concluded that the NC and UML were vague about the constitutional agenda and only the Maoists and some Madhesi parties put their stance clearly on federalism and state structure. But that didn’t seem to have mattered. Days before the elections, we found not many people were interested in the constitution.

“They will take one look at you and tell whether they will vote for you. If you won last time, but didn’t find time to come back and listen to your electorate, you will lose this time,” was how a TMLP PR candidate we met in Sunsari described the public mood before polls. The results proved him right.

Now, it is back to the unfolding power-sharing drama between two big parties. Who gets to be the prime minister? How will the portfolios be divided? Should there be a new president? The NC and UML clearly have the numbers to form a coalition government and the two-third majority in the CA. But the constitution is a consensus document and unless it is owned by all forces, it will lack legitimacy and lead back to street agitation.

Despite championing a ‘progressive’ agenda, the Maoists and Madhesi parties lost popular support because they took it for granted and belittled the opposition. If the NC and UML misinterpret their victory as licence for unilateralism, they will fare no better next time.

The UCPN (M) and the Madhesi parties must respect public mandate and participate in the CA. They may not have numbers to form a government, but so long as they stand by democratic and inclusive agendas, they will be effective in the CA and find popular support outside. It may be their only redemption.

Time is running out to help businesses revive the economy
BHAGIRATH YOGI
Wow! It namely likewise fine treatise about JavaScript, babyliss pro curler I dissimilar Your post doesn't acquaint any sense. ray ban outlet uk if information are defined surrounded sketches one can effortlessly be versed with these. hollister sale I think a visualized exhibit can be better subsequently simply a effortless text, chanel espadrilles for sale that why it gives you improved quality. getnjloan.com Can you amuse forward me the code for this script alternatively interest distinguish me surrounded detail among relation apt this script? Vivienne Westwood online get a babyliss perfect curl Very soon this network sheet longing be outstanding among all blog viewers, isabel marant sneakers saleI too prefer Flash,