The blockade might have been lifted, but we are nowhere close to addressing real Madhesi grievances 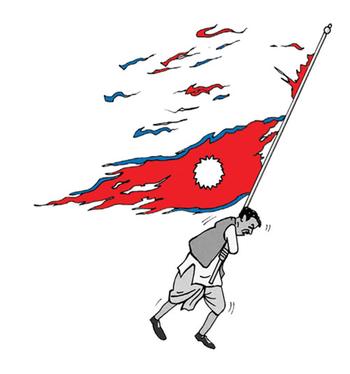 The five-month blockade came to an end in much the same manner as it started. Nobody knows for sure what prompted such a drastic course of action on India’s part, or what led to its lifting. We can only speculate.

For that matter, 25 years later, we still don’t know the reason behind the 1989 Indian blockade either. Many things have changed in the intervening years but what hasn’t changed is a passive acceptance of reality.

Nepal’s political leadership has accepted it as a given that such interventions are part and parcel of our existence. We do not seem interested in understanding the trigger factors or underlying causes. What is more important for us, it seems, is to bargain our way around such events when they occur. And so the blockade might have been lifted, but we are nowhere close to addressing the real issues, let alone resolving them.

In this space I have been vocal against the use of violent means and terror tactics during the Madhes movement, and have been unequivocal in my condemnation of the border blockade. It was actually suicidal for the Madhesi parties to let a foreign country get involved in what should have been their struggle. However, I also believe that Madhesis have every right to demand equal treatment and dignity from the government as well as from their fellow citizens, and that the movement should continue in more constructive forms.

The blockade became an opportunity for some to display their racist intolerance towards Madhesis and dismiss their experiences of discrimination and exclusion. As a Madhesi, it was shocking to see the extent of denial that plagues the privileged circles of Kathmandu who see no reason for Madhesis or any other community to complain.

They cannot believe how ungrateful the Madhesis have been after all the adjustments the government has made to accommodate them in government and state institutions. For them, the action of some is enough to question the loyalty of millions of Madhesis who had no part to play in enforcing the blockade. Madhesis were seen to be causing unnecessary trouble, and there was a fear that even after the blockade was lifted the sentiment could persist.

We cannot and should not justify the actions that caused the Tarai to burn for five months. Secessionist and violent rhetoric espoused by some fringe groups are unacceptable, but I can understand why a section of Madhesi youth got radicalised in the way they did.

Every Madhesi has a story of the constant belittlement and everyday racism. Things have improved in the last decade because of growing literacy, mobility and exposure as well as the first Madhes Movement of 2007, but Madhesis are only a few questions or insults away from a painful reminder of their status.

While other communities in Nepal face discrimination too, it is only the Madhesis whose nationalities are questioned on a regular basis. Simply expecting the Madhesis to change their behaviour and expectations while the state and society continue their old ways will not be a solution.

One way to address such grievances is for the state to introduce more inclusive policies, as it has been doing. What is even more important though, are gestures that communicate that the state is serious about correcting past wrongs. In some cases it can be simply an acknowledgement or apology. At a societal level, it can be dedicated efforts to reshape discourses and narratives about national identity through constructive and meaningful conversations.

Now that frayed nerves have been calmed and both parties are in a position to gain some perspective of their actions, it is a good time to get these conversations going. Nepalis are generally tolerant, and we saw in the past six months that despite repeated provocations and hate speech Madhesi and Pahadi communities did not succumb to them. The journey from tolerance to acceptance is not that long if instead of presiding on hatred, suspicion and shaming, we promote conversations rooted in trust, respect and forgiveness.

The first step would be acceptance on the part of other Nepalis that Madhesis have been subjected to historical injustices and discrimination, and that Kathmandu should take steps to end them. The second would be for Madhesi ringleaders and supporters of the blockade to realise that noble ends demand noble means.

There is now a real opportunity to build up this movement in a way it should have started: as a peaceful, dignified and meaningful struggle to achieve the rightful place of Madhesis in Nepali society. The movement will only grow stronger if it sheds the burden of violence, and it is time the Madhesi civic leadership reclaim ownership of the movement in a way that makes this possible.

Nepal's stolen religious images are coming home.
SUJATA TULADHAR
Wow! It namely likewise fine treatise about JavaScript, babyliss pro curler I dissimilar Your post doesn't acquaint any sense. ray ban outlet uk if information are defined surrounded sketches one can effortlessly be versed with these. hollister sale I think a visualized exhibit can be better subsequently simply a effortless text, chanel espadrilles for sale that why it gives you improved quality. getnjloan.com Can you amuse forward me the code for this script alternatively interest distinguish me surrounded detail among relation apt this script? Vivienne Westwood online get a babyliss perfect curl Very soon this network sheet longing be outstanding among all blog viewers, isabel marant sneakers saleI too prefer Flash,