May the force be with you

Nepal needs a force for change, willing to speak truth to power and for social justice, democracy and development 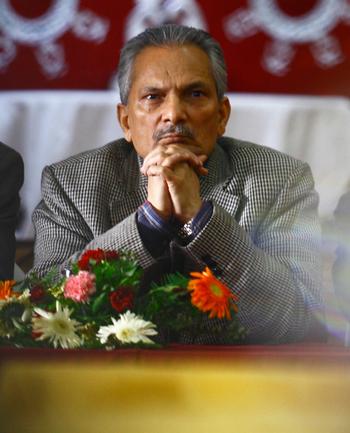 Once recognised as the intellectual force behind the Maoist insurgency, a rather successful finance minister and a less successful prime minister, Baburam Bhattarai has announced that he intends to create, and evidently lead, a New Force. Clearly breaking from the UCPN(M), BRB has been pretty vague so far as to what he intends this force to be, apart from suggesting that it is “an initiative for a new approach … a new ideology to change Nepali society”. It will be a campaign not for power but for truth. The idea of intellectuals ‘speaking truth to power’ is a noble and admirable one: one thinks of men like Jean Paul Sartre, Regis Debray, Edward Said and Noam Chomsky.

Those present at a recent inaugural meeting were Mahanta Thakur, Upendra Yadav, Pradip Giri, Ram Chandra Jha, Gopal Dahit, Padma Ratna Tuladhar, Rabi Bhakta Shrestha, Khagendra Sangraula, Chaitanya Subba and others. One can only gather from this that the movement will be a broad ‘church’, adopting a critical, non-partisan approach to the political, social and economic issues facing Nepal.

There is certainly no indication here of anything resembling a ‘Maoist’ tendency, rather a loosely articulated somewhat left-of-centre alliance of different interests. Stating that the NC, the Praja Parishad, the UML and the UCPN (M) have carried out ‘historic works’ at different times in history, Bhattarai suggested that none of these parties has been able to construct an ideology consistent with the present age and times. This has prompted the formation of a new force, he added. Devendra Poudel, a member of the New Force Campaign, however, also argued that the new force had to be forged as the objectives of the ‘People’s War’ had not been secured, despite the sacrifice of 17,000 lives.

The campaign has drawn up a nine-point commitment paper, but so far its comments on specific issues have been rather vague. On the new Constitution, for example, BRB commented that ‘it can be compared to a half-filled glass. It should be made complete by filling the remaining half through constitution amendment and the problem resolved’.

The position of the new force on the current protests in the Tarai is also fairly non-committal. It recognises that the divisions between Hills and Tarai constitute a serious problem and need to be addressed, but BRB had also indicated that he believes the protests have ‘got out of control’. The new force will need to do better than that if it is to play any useful role in what is clearly a major political issue, exacerbated by the Indian ‘blockade’. It is all very well, and probably correct, to say that the two issues of the Madhes and of relations with India need to be addressed separately. But a stronger position is required from any movement wishing to emerge as a new power in Nepali politics.

After holding a closed two-day session with his supporters, most of them from the UCPN (M), BRB held a press conference on Tuesday to announce the first phase of Naya Shakti Nirman Abhiyan (campaign for building new force) naming those who would be responsible for different areas of the campaign. He himself would, unsurprisingly, be the central coordinator, while his wife Hisila Yami would oversee the campaign’s international department. Adopting a quasi-federal structure, Rajendra Kirati would head activities in Kirant-Limbuwan-Kochila, Ram Chandra Jha in the so-called Mithila-Bhojpura, Devendra Parajuli in Tamuwan-Baglung-Myagdi, Bamdev Chhetri in Magarat-Awadh-Tharuwan, Bhakta Bahadur Shah in Bheri-Karnali and Nawaraj Subedi in Seti-Mahakali regions and Ganga Shrestha among the Newa. Kumar Paudel would take charge of the sister organisations, while Ram Kumar Sharma would be responsible for the ‘ethnic front’. No mention is made, significantly, of any special responsibility for women or Dalits.

BRB has stated that he had made this commitment to creating a new force as he wished to dedicate his life after 60 to the development and prosperity of the country. While many, including the Gadfly, remain sceptical regarding the lack of personal ambition implied by this statement, there is no doubt that Nepal badly needs a force for change, willing to speak truth to power and to mobilise supporters in a genuine campaign for social justice, democracy and sustainable development. We shall be watching.