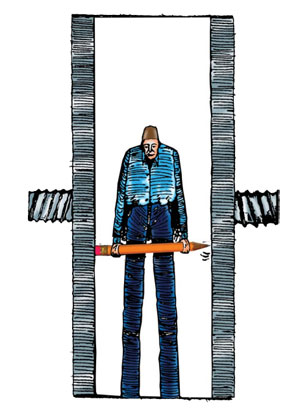 ATLANTA – From the other side of the world and in the larger scheme of things, the differences between the political parties on state restructuring, which haven’t narrowed down a bit in recent negotiations, seem to be petty and easily reconcilable.

And in all the toing and froing about federalism, a critical aspect of the new constitution seems to have been forgotten: the freedom of expression. The Preamble of the Interim Constitution of Nepal speaks of ‘full commitment to democratic values and norms including…complete freedom of the press…’. So there is already an implied limitation here for others. If one does not belong to the media, does it mean a citizen does not have the freedom of speech and expression?

After all, the freedom of press is not the right of journalists, it actually protects the citizens’ right to know. We in the fourth estate are just the custodians of that right. We don’t know yet whether this right would make it to the preamble of the new constitution, but citing it there would ensure that it cannot be amended easily.

This is worth considering since it would cover all those left out of the ambit of the ‘press’ in the country, including online news portals, tv and radio channels and citizens. There were arguments from some quarters that this right was being violated in the arrest of CK Raut who openly called for the right to secession. Whether one agrees or disagrees with Raut, it remains that he had the right to voice that opinion.

I doubt if Home Minister Bam Dev Gautam has read Oscar Wilde who famously said: “I may not agree with you, but I will defend to the death your right to make an ass of yourself.” Or words to that effect. Raut had every right to make an ass of himself.  The United States, the Land of the First Amendment and the city that networked the world in news, was a good place to remind myself of the Bill of Rights. The first of 10 amendments to the US constitution says: ‘Congress shall make no law… prohibiting the free exercise thereof, or abridging the freedom of speech, or of the press ...’

With the rights of religious minorities and identity - all important considerations while discussing contents of the new constitution- the freedom of speech and expression needs to be getting the attention it deserves. There could be some required limitations, like controlling hate speech, but a categorical mention of this right of citizens, irrespective of their identity and background is a must.

Worryingly, there’s growing intolerance to dissenting opinion in South Asia. SAARC leaders could ponder over this at their summit in Kathmandu on 25-26 November, but it is unlikely since they are the ones trying to muzzle the media.

Independent Sri Lankan journalists are being harassed, attacked and intimidated. Some have been killed, others were forced to leave the country. In Bangladesh and Pakistan people are being arrested for ‘blasphemous’ content in newspaper and social media platforms.

India, the largest democracy with a long tradition of free press and more or less independent judiciary has seen harassment of people deemed critical of the new prime minister, Narendra Modi.  Books, first published years ago, are being banned in India. Bhutanese authorities believe that a monolithic religion, universal language and dress code are the ingredients of happiness. In Nepal, there have been arrests of journalists, film reviewers and others for their comments, reports and posts in traditional and social media.

Compared to countries in the region, Nepal seems to be much better off. But if  intolerance to dissent grows across the region, we are going to catch a cold too. The pressure on the government here to sync in would be too hot to handle. Despite sharp ideological differences in their party constitutions and election manifesto all leaders  behave almost in identical manner when it comes to withstanding pressure from China and India. They usually cave in.

The members of Constituent Assembly would be doing the federal democratic republic a great service by ensuring that the right to freedom of speech and expression, among other inalienable rights, gets mentioned in the preamble of the new constitution.

‘If liberty means anything at all, it means the right to tell people what they do not want to hear.’ That was from George Orwell. May our CA members keep this in mind.

Nothing but contempt, Binita Dahal

Parting shots from our columnist before he relocates
DANIEL LAK

Weight of the world

Rajendra Dahal in Himal Khabapatrika, 3 October-1 November
Wow! It namely likewise fine treatise about JavaScript, babyliss pro curler I dissimilar Your post doesn't acquaint any sense. ray ban outlet uk if information are defined surrounded sketches one can effortlessly be versed with these. hollister sale I think a visualized exhibit can be better subsequently simply a effortless text, chanel espadrilles for sale that why it gives you improved quality. getnjloan.com Can you amuse forward me the code for this script alternatively interest distinguish me surrounded detail among relation apt this script? Vivienne Westwood online get a babyliss perfect curl Very soon this network sheet longing be outstanding among all blog viewers, isabel marant sneakers saleI too prefer Flash,