Some citizens more equal than others 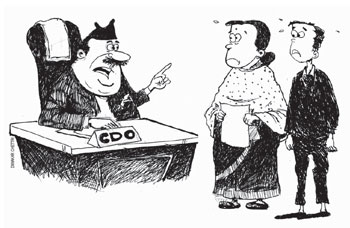 DIWAKAR CHETTRI
Speaking at a program on citizenship in the new constitution, Deputy Chairperson Onsari Gharti Magar expressed surprise over the replacement of the word “or” with “and” in the draft on citizenship right by descent which was sent to CA’s Constitution Drafting Committee. The change may look like a minor one but the affected phrase now becomes “mother and father” instead of "mother or father”.

“We don’t know who inserted the word ‘and’ in the draft,” Gharti Magar said during the interaction organised by Sancharika Samuha and Forum for Women, Law, and Development. “We were surprised to see the changed text at the Constitution Drafting Committee.” For the record, the draft was prepared by the Constitutional Records Study and Determination Committee headed by the UML’s Bishnu Paudel.

The attempt to discriminate against women of Nepal, however, is not new. A seven-member subcommittee in the first CA, headed by UCPN (Maoist) Chief, Pushpa Kamal Dahal, recommended making it compulsory to issue citizenship in the name of both father and mother. Six of the members were either communists or ‘progressives’ as they like to call themselves.

While on paper this curtails the rights of both father and mother, a visit to citizenship section inside any district administration office demonstrates that women are more discriminated against. Cases have been filed and won to force stubborn DAO officials to issue citizenship in the name of mother, but mothers are still frequently turned down. If a man applies for citizenship for his children, the papers are passed on more easily.

In an earlier piece from November 2010, I had touched upon this subcommittee’s regressive recommendation. Sadly, not much has changed in the last four years.

According to several CA members, women of Nepal do not qualify to be treated on par with their male citizens, when it comes to marriage and citizenship rights.

Even ‘progressive’ parliamentarians toe the line of the party bigwigs.

Unfounded paranoia that men from the bordering Indian states of Bihar and Uttar Pradesh will marry our women and inundate our southern districts is the biggest reason why leaders of this country don’t want to give women equal citizenship rights. This is clearly an instance of discrimination. But even Madhes-based parties who do not tire of speaking about the need to mainstream the voice of Tarai residents prefer to keep mum on issues of citizenship.

The “father and mother” provision would not only deny citizenship to children of separated parents, but also to children of single women. If a woman wants to adopt, the path to even naturalised citizenship for the adopted child is not clear. The same discrimination applies if a non-Nepali man marries a Nepali woman. Until the man becomes a Nepali citizen, the woman cannot ensure citizenship to their children. There are other consequences as well even if naturalised citizenship is granted to those Nepali children who, at least by their birthright, should have been citizens by descent.

Some of the top public positions in the country are only reserved for citizens by descent. I am not suggesting that this should be changed; that is a matter for another debate. There can be no space for antiquated citizenship laws in a constitution that is forward looking.

Stateless in their motherland, Kunda Dixit