Edmund Hillary passed away 10 years ago this week, but the legacy of his work in Nepal lives on 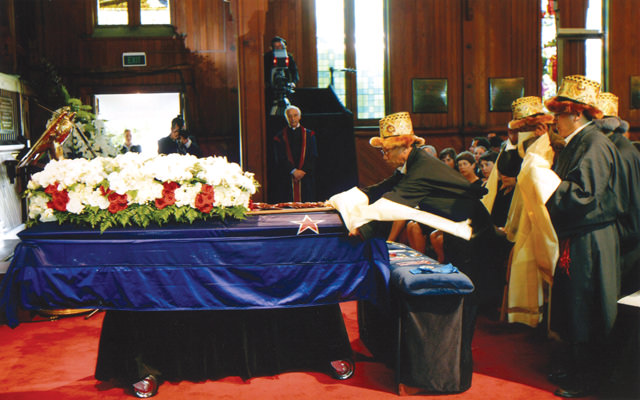 The call from Lady June Hillary came early one opaque Kathmandu morning. “Lisa, sorry to wake you but I promised to let you know — Ed just left us. Please come.”

It was 11 January 2008, and life throughout New Zealand paused as the loss was digested. The day had arrived, the lanky hero was gone, his craggy face familiar from the country’s five dollar bills. Sir Edmund Percival Hillary KG ONZ KBE was not only the conqueror of Mt Everest but a statesman, ambassador and knight of the garter.

Television presenter Mark Sainsbury, on the road to Wellington, screeched to a halt and headed his aging white Jaguar back to Auckland. The news reverberated around the world. In later years Ed delighted in meeting people who told him: “I thought you’d been dead for ages!” Now he was.

June was pausing at the traffic lights on her way to the hospital when Sir Ed succumbed to heart failure. Ironically it was the day he was due to be discharged — registered as ‘Vincent Stardust’ to mislead the media.

Everyone wanted to be part of the burra sahib’s departure. A state funeral in Auckland cathedral had always been on the cards, a rare honour and New Zealand’s first for many years. Whilst family and friends mourned, the government rallied, the services cranked into gear, and the clergy dusted off their ceremonial vestments. Holy Trinity was made ready for the lying in state, and the adjacent St Mary’s Church cleaned and wired for sound and screen. Expanses of carpets were laid, pews scrubbed and flowers arranged. The organ was tuned, choirs rehearsed and chosen soloists practiced — Dame Malvina Major, a Tongan tenor and a violinist friend.

The Prime Minister’s office led the funeral preparations. The wake would be hosted by the Governor-General in the sylvan gardens of Government House, and friends invited to dinner afterwards, catered in a white marquee at Sir Ed’s home. Tributes poured in, invitation lists were assembled and a national holiday declared. Mark Sainsbury would commentate the worldwide TVNZ coverage, and on the night of the funeral Tom Scott’s documentary Remembering Ed would be broadcast — we had helped him shoot it in Nepal. 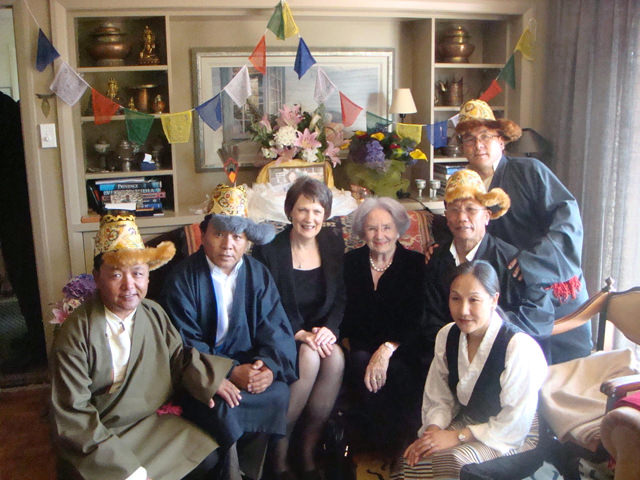 Five of Ed’s Khumbu Sherpa friends and Elizabeth Hawley were government guests, and I flew with them from Kathmandu to New Zealand helping with the hiccups — a ticket did not match the passport name and a suitcase went missing. In Auckland we were welcomed at the aircraft door by a tall official in a pinstriped suit with a military bearing and distracted demeanour. “I’m Elizabeth Hawley, not you!”

Andrew Beattie reeled at the fierce little lady in a wheelchair berating us for losing her luggage, but I was used to it — the bag had been left behind in her bedroom. He helped us whizz through immigration and handed me the keys to a large gold Toyota sedan before hurrying off to another appointment. Once we were settled in the guesthouse opposite Ed’s house in Remuera, the Sherpas lined up to practise laying khatas on the luggage rack while I helped Elizabeth replenish her wardrobe, then we walked across the road to June. 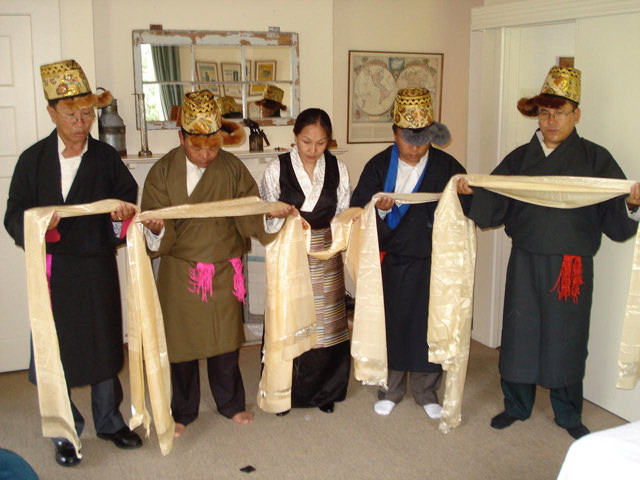 Sir Ed's Sherpa friends rehearse the laying of the khatas on Sir Ed's casket in our hotel room.

The house was full of flowers and family, and the doorbell and telephone never stopped ringing with more condoling friends and overseas guests, the great and good of mountaineering and polar exploration. June was dazed but doing well. The Herald of Arms, a sympathetic dapper chap with thick white hair, came to collect Ed’s medals, which after a panic were eventually found safe in the sock drawer. Norbu Tenzing Sherpa, Tenzing Norgay’s distinguished son, was gentle and supportive. Jan Morris popped in, dishevelled from her London flight, and George Lowe, already confused and forgetful with his final illness.

Prime Minister Helen Clark kicked off her shoes and relaxed on the sofa as she discussed arrangements with June whilst chatting Himalayan Trust with Ang Rita and Nepali politics with Elizabeth. I helped the generously bearded Jim Wilson nervously rehearse his best friend’s eulogy. We dispensed endless cups of tea and a thoughtful convent had sent a huge cold ham — meals, friends and family came and went around the kitchen table.

One afternoon, I slipped away with June’s daughter Sue and grandson Sam to the undertakers where Ed’s coffin was open for the family — he looked peaceful enough, but I wished I had not gone. 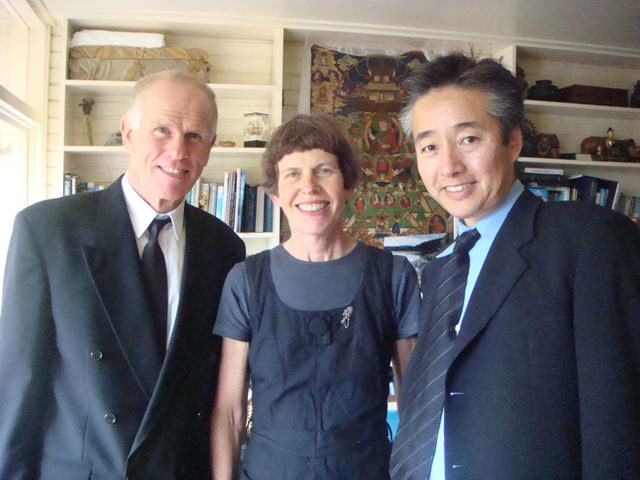 Sir Ed's family and friends gathered from all over the world - Peter and Sarah Hillary (his son and daughter) with Tenzing Norbu Sherpa, son of Tenzing Norgay with whom Sir Ed first climbed Everest in 1953

“Call Andrew, he’ll fix it!” was the mantra in the mourning Hillary household during those days leading up to the state funeral. Andrew Beattie would arrive looking harassed as though he should be somewhere else, always smart in suit, white shirt and sombre tie, twitching gently at the pressure of keeping all the organisational balls in the air. Smiling kindly, he reassured us whatever it was would be solved. “He’s marvellous, he thinks of everything,” sighed Lady June.

A proposal that Tibetan prayer flags decorate the cathedral — no way, Ed was a New Zealander for heaven’s sake. Refined jostling for invites — the Prime Minister seated with the widow, of course. Can the bell from Antarctica’s HMNZS Endeavour be rung at the ceremony –- it was, but none of us remember hearing it. Can the Hillary College kids do a farewell haka for the departing hearse -– they did, and it was terrific. Health and safety objected to the Alpine Club members’ ceremonial archway of steel ice axes outside the cathedral — hold them upside down. Whatever the problem, Andrew made it go away.

For two days and one whole night the line of mourners snaked down the Parnell streets, queuing to pay their respects, filing past the greatest Kiwi who was lying in state in Auckland cathedral. Late that evening I slipped through a side door to marvel at the diversity — old and young, smart and scruffy, trim and tattooed, small children in pushchairs, and even hospital patients on drips pushed by their nurses. Beneath the modern stained glass windows, the Indian community had lit lamps beneath a garlanded portrait, his medals were arrayed on blue velvet cushions, and the ice axe used on Mt Everest in 1953 lay on the flag-decked casket. One of the naval cadets guarding each corner swayed precariously. 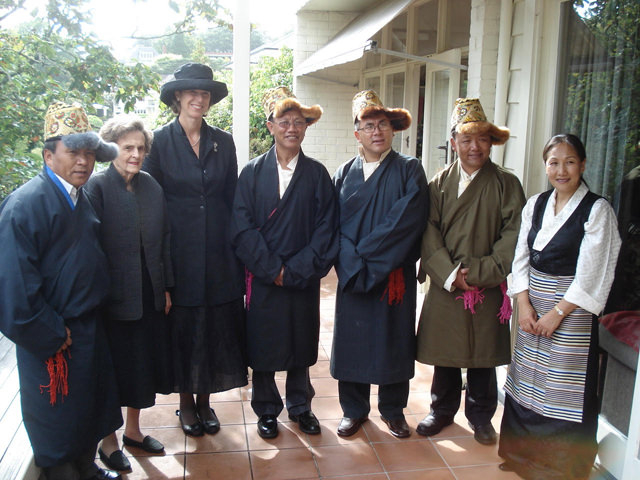 When the day arrived, we dressed in black and assembled early at Ed’s house. The decision was made not to wear hats, but I wore one anyway. June was serene and severe in black, her blue grey hair swept into the usual immaculate chignon. Helen Clark, the family and I left in a cavalcade of large shiny government cars, with Andrew in the driveway twitching more than usual, watch checking and mobile phone glued to his ear. I travelled with the oldies, Elizabeth Hawley and Ed’s elder sister June Carlile — more than a little vague she turned to me as we set off: “What lovely weather! Is Ed well enough to be with us this morning?”

Andrew had us arrive last, with the congregation already seated, and we negotiated the length of the church to discreet whispers and nudges. It was a shock to see Sir Ed’s body waiting in front of the altar, the casket grandly draped in the flag with white lilies, medals and ice axe. June rested a gentle hand of farewell, the Sherpas laid their well-rehearsed khatas, and the cameras clicked and purred.

The service was a blur of music, hymns, tributes and speeches. Seated in my black hat, grandchildren fidgeted in the pews, an eccentric niece laid on healing hands, and Elizabeth fussed with her walking stick, then suddenly it was all over. The defence force escort hoisted the huge casket onto their uniformed shoulders and our little procession followed, led by June and Helen, with suitably bowed heads. 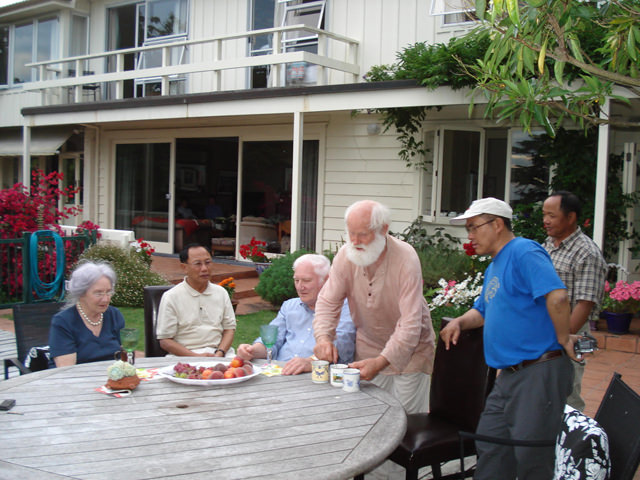 Friends and family gathered from all over the world at Sir Ed's house in Remuera to pay their respects to Lady June Hillary (left) in the days leading up to the state funeral.

Leaving the cathedral, a light rain matched the mood. Our cortege of black cars followed the hearse through the hushed streets of Auckland. “Delays likely! State funeral!” motorists had been warned for days to avoid the route from the cathedral down Remuera Road to the crematorium. The nation’s standards flew at half-mast and the museum stretched a massive mural of Everest across its portico. Every inch of the way was lined with people, some waving, some silent, some wiping away a tear, and many spontaneously clapping in admiration of the world’s most famous New Zealander. Toddlers were lifted by proud parents, and teenagers in togs ran barefoot, wrapped in Kiwi flags. Uniformed firemen at the station opposite Ed’s house saluted, old men snapped to attention, and I even saw a woman waving her dog’s paw. The government driver was wrapt, shaking his head in wonder as he steered through the crowds: “In all my years I’ve never seen anything like this.” A large Maori man ran onto the road to lay flowers in tribute on the bonnet, causing an anxious moment but security held their nerve. I sat next to an unusually silent Elizabeth Hawley and a teenage granddaughter, grieving in black lace and red lipstick.

The levity lifted when we reached the end of the journey, away from the crowds and faced only by finality. With difficulty the men of the family, led by son Peter, hoisted the heavy coffin across the courtyard for cremation, the Dean said a few words, and afterwards I found daughter Sarah sobbing in the Ladies.

It was several days later that I wondered aloud: “Where’s the ice axe?” A national treasure usually enshrined in the Auckland Museum, it had lain atop the casket, last seen leaving in the hearse. June looked sharply at Andrew. Andrew blanched and went quiet. After some tense moments on the Blackberry with the suited leg jiggling in agitation, Andrew confirmed that the undertakers had retrieved it after the ceremony — rescued from incineration for all time.