Mt Everest is a license to print money for Nepal’s economy, but it needs honour and trust 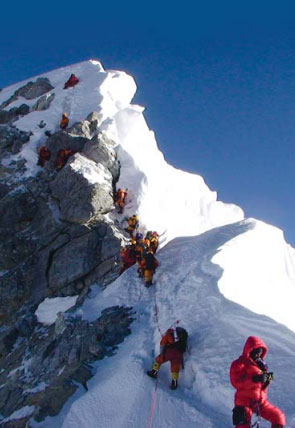 As I wrote in a previous column (‘The gate, #731) if you want to grow, to develop and improve in life or business then ‘feedback’, or advice, can be a big help. The most important advice is that which you most don’t want to hear, but how do you improve if no one tells you what is wrong? So as the outsider looking in, let me tell you about the ‘long game’.

I came to Nepal for the first time in 1983 to climb Manaslu. I liked it so I came back, not for Manaslu but for Nepal and its people. In 1988 I returned to climb Everest and again in 2001. I was still in the UK Royal Air Force then and thought this was my whole life because I loved it so much. Back then, there were not as many people or teams on the mountain so I got to know everyone. We pulled together to make it all work. My team contributed. We had brought ropes to fix on the mountain, but this work was done by others so we gave our rope to them. We shared equipment and when I left, I sold some of my gear to other teams. The deals were done with handshakes, good deals that were fair and we were all happy with.

I had not imagined that 15 years later, the same people would be my best customers when I started selling the Topout oxygen masks that I later invented. I could not have guessed back then what Everest had in mind for me, how she would change my life as she has changed so many others. That I would leave the job I loved, and the security of regular good wage to run my own company and work in Nepal.

I need not have worried. What I did not know was that success was almost assured. Why? Because people already trusted me. They remembered 15 years back to 2001 to a person who did what he said he would do. They forgave me some initial mistakes because they knew I would fix them. When I needed an office I spoke with Dawa Steven at Asian Trekking about locating with them who said yes instantly. He explained that he had watched my company (every company is the man) grow. Dawa said basically I did “what it says on the box”. I delivered, and he wanted to work with people like that.

That is what I mean by the ‘long game’. I am sorry, but Nepal is not always a good player. Here it is ‘$5 on Monday instead of investing and taking $50 on Friday’.

Everest is a huge part of Nepal’s economy, it is literally a license to print money. A permit now costs $11,000 per person and climbers get nothing for this money other than their name on a piece of paper. Hope I am wrong, but I can predict that at this price the treasury will make less money than they did last year when it was $10,000. The mountaineering community is still waiting for positive confirmation that the permits they paid for this year for expeditions that were cancelled due to the avalanche on 18 April will be honoured in future. ‘Honour’ is central to the long game.

What can Nepal do to play the long game so it is trusted and able to make money? In business speak we call it ‘added value’ – that what we can do to make a deal more attractive. The more difficult or uncomfortable something is the less likely we are to want to do it. Like standing in a visa queue for one hour and fifteen minutes with the wrong form or to be told when you get to the front of the queue that you are on the wrong queue. Then you can go and wait for two more hours for your luggage. Sorry, not a good start and your client has not even got to their hotel yet. You may not want to hear the feedback, but from the outside in that is how it is.

Ted Atkins is a former RAF engineer and now partner and owner of four international companies. Outside In is his exclusive monthly column for Nepali Times on mountaineering and tourism.

If Nepal indeed turns into a republic, history will not hold the Nepali people responsible.
RABINDRA MISHRA
Wow! It namely likewise fine treatise about JavaScript, babyliss pro curler I dissimilar Your post doesn't acquaint any sense. ray ban outlet uk if information are defined surrounded sketches one can effortlessly be versed with these. hollister sale I think a visualized exhibit can be better subsequently simply a effortless text, chanel espadrilles for sale that why it gives you improved quality. getnjloan.com Can you amuse forward me the code for this script alternatively interest distinguish me surrounded detail among relation apt this script? Vivienne Westwood online get a babyliss perfect curl Very soon this network sheet longing be outstanding among all blog viewers, isabel marant sneakers saleI too prefer Flash,