In the absence of hope

The people are exhausted, they cannot know how much longer this impasse will continue 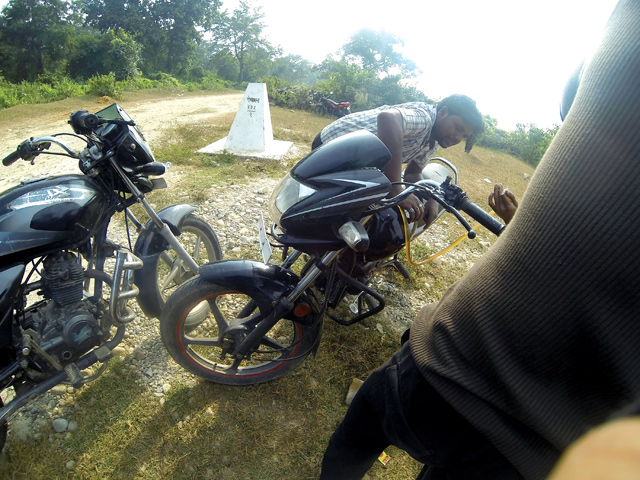 BIKRAM RAI
THRIVING BUSINESS: An Indian trader transfers petrol from his bike to sell to Nepali customers at Thori, a bordertown in Parsa of Chitwan on Wednesday.

One of the most striking features of the political developments of the past few weeks has been the exponential growth of the shadow economy. There is a major national fuel crisis, and yet traffic has resumed in the capital and more and more cars and motorcycles are plying the roads.

Petrol stations are closed, and yet fuel is not in short supply. Pictures of children selling petrol in empty mineral water bottles along the East-West Highway have made the front pages more than once. The brokers of Kathmandu and manpower agents have halted their official businesses in exchange for the black market fuel business.

Even private homes along the border have been turned into petrol and gas godowns. One cylinder of gas is going at Rs 8,000 and Rs 6,000 for just the gas. Petrol started at Rs 500 per litre but the laws of supply and demand operate even in the black market, so prices have crashed to Rs 300 per litre. Still three times higher than normal, but at least it is available. Diesel is selling at Rs 200 per litre and can be found everywhere except at the pumps.

Industry is now on the verge of closure, inflation will continue even if this crisis is resolved. The government estimates production to fall by 34 per cent this year and inflation to be up 100 per cent for some time to come. The country’s economy is hanging by a thread, and that thread is remittance from overseas Nepalis.

The people find themselves in an even deeper depression than the economy. Even the most entitled among us are wishing we were anywhere but here. The state has again opened fire on its own citizens, killing four this week. Agitators also continue to create havoc: setting an ambulance ablaze and killing a baby, destroying vehicles carrying essential medical supplies. A pervasive sense of hopelessness, and that by now famous idea about fatalism, has gripped us all. Polarisation has taken to new heights and developed new meaning entirely.

Leaders on all sides are not backing down, and yet the photo-ops at negotiations show them all smiles and laughter as though they were sitting down to enjoy a brandy and cigar after dinner at the gentleman’s club. The same leader of the agitation who is seen spewing anger against the government during a tv talk show is seen an hour later having a laugh with government leaders on the same station. The government officials calling agitators “terrorists” at press conferences are seen having a side chat with the “terrorist”.

The negotiations are about bargaining positions for portfolios and power, with scant regard for the people’s grievances whether Madhesi or otherwise. By now, if polls were not enough (and sometimes they are not) it is increasingly clear that Madhes-based parties do not reflect the aspirations of the plains. They were lurching like hawks waiting to dive in for the spoils. The parties in the coalition also are merely using the rhetoric of a chest thumping 'khas' nationalism to take the people of the hills for a ride, with no regard for their needs and aspirations.. Perhaps nothing better illustrates this than the utter disregard of this government to rebuild from what is ironically the ‘Gorkha Earthquake’, the heartland of the erstwhile Khas kingdom. One would have thought that at least the Gorkha Palace – if not the people -- would have got some attention by now.

The people are exhausted. They cannot know how much longer this impasse will continue. The idea of a prosperous and just Nepal is a mirage. The immediate impulse may be to respond, to rebel, to march. But what would it be for and whom would it be against? Importantly, who is a suitable alternative to KP Oli, or this government? And it is in searching for this answer that the absence of hope is most felt.

The mystery of the Black Bhairab

If you look long enough at that wide-eyed, grimacing face you see a scarlet smile of pleasure.

The gates to the Royal Palace

Perhaps it was that threat of eventual collapse that prompted replacing the splendid old palace with a modern complex.
DESMOND DOIG

Shova Wagleys paintings want to privilege perception by the senses.
AJIT BARAL
Wow! It namely likewise fine treatise about JavaScript, babyliss pro curler I dissimilar Your post doesn't acquaint any sense. ray ban outlet uk if information are defined surrounded sketches one can effortlessly be versed with these. hollister sale I think a visualized exhibit can be better subsequently simply a effortless text, chanel espadrilles for sale that why it gives you improved quality. getnjloan.com Can you amuse forward me the code for this script alternatively interest distinguish me surrounded detail among relation apt this script? Vivienne Westwood online get a babyliss perfect curl Very soon this network sheet longing be outstanding among all blog viewers, isabel marant sneakers saleI too prefer Flash,