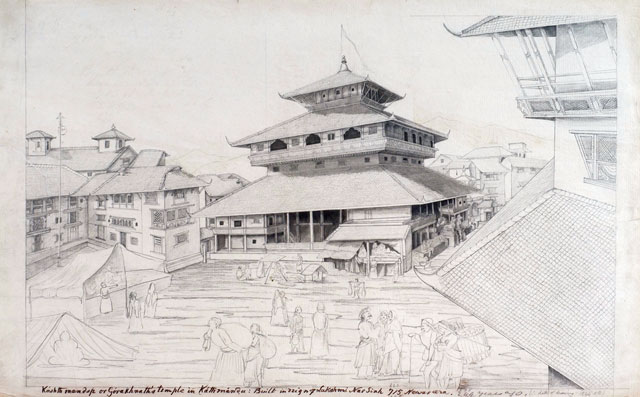 AS IT LOOKED: A pencil sketch of the Kasthamandap Temple by Nepali artist Rajman Chitrakar who worked with British Resident Brian Hodgson from 1828-1844.

When the earthquake hit on 25 April 2015, besides people’s homesteads, many temples, stupas and other ‘built heritage’ fell or were weakened. This was the result of poor maintenance of the brick, mud and wood structures as well as the specificities of Malla-era structures.

Members of the public came out to save fallen gods and goddesses, woodwork and other items from vandalism. The Patan Durbar precinct was the best example of spontaneous citizen action, followed by a staged handover to the authorities.

What has happened to the human victims of earthquake is repeated when it comes to divinity in temples, they too are now going to spend a third monsoon under tarps. After the citizen-led immediate rescue and rehabilitation, when it comes to reconstruction, the government has succumbed to inertia and ennui is promoted by ‘bhagbanda politics’.

The delay in reconstruction of built heritage has rendered a severe blow to the living culture of Kathmandu Valley, already weakened over the decades by the great forces of economics and demographics. When a mandir or baha is not rebuilt in time, the ‘intangible heritage’ as in puja rituals, incantations, processions, jatras and feasts – are all weakened.

Our varied culture is closely tied to the buildings that house the gods, goddesses, texts and assorted esoteric paraphernalia. A Valley already reeling under urbanisation has been gravely effected not so much by the April earthquake – which actually provided a rallying point – as the inability of those in authority to hasten the reconstruction.

There are several debates raging without resolution when it comes to reconstruction or restoration of built religious heritage. One of them involves the inability of standard government rules of bidding and procurement to respond to the specific requirements of heritage conservation and restoration – the lowest-bidder-wins system tends to guarantee poor results.

One area that requires immediate sorting out is whether modern material and techniques, including steel and concrete, can be used in the restoration of built heritage. In the debate, there is one flank represented by architect and cultural authority Sudarshan Raj Tiwari, who maintains that the historical methods and material are to be used without deviation, as they represent the epitome of what has been achieved in the Valley over historical time.

The argument is that injecting modern techniques and material would lead us down a slippery slope, with a free-for-all leading to loss of the history and culture that the buildings represent. The finger is pointed at those who think otherwise, as if they are turncoats somehow carrying the agenda of ‘Western experts’ as opposed to indigenous knowledge systems and expertise.

“There is no middle path when it comes to this debate, we must build exactly according to the great tradition of traditional Valley architecture,” Tiwari told this writer.

There is, however, a large number of architectural, engineering and cultural heritage experts who do not agree with Tiwari’s strict approach. They include the engineer Ananta Ram Baidya, who has worked in building codes implementation in earthquake-prone California after decades, including historical edifices. He says, “The primary consideration should be security of the public, while remaining true as far as possible to the inherited buildings and structures.”

After having heard the professionals, this writer falls on the side of those who would selectively use modern means and material in the rebuilding of Kathmandu Valley’s built heritage. Our ancestors knew the inevitability of earthquakes and expected buildings to fall at some point even while guarding against it in the design and construction. Whereas in the modern era with all kinds of transformed priorities, one should consider some adjustments to make the buildings better able to withstand quakes, especially when we are told by seismologists that the ‘Big One’ is yet to come.

There should be two primary considerations: a) rebuilding with near-absolute fealty to traditional means and materials, with exceptions to be handled on case-by-case or temple-by-temple basis with the approval of the Department of Archaeology, and b) exceptions to be mainly guided by the physical security of the populace, given the changed use of public spaces including temple precincts, greater population density, the possibility of a great quake, and what the changed context of modernity does to maintenance protocols.

There are many reasons why there has been delay in heritage reconstruction. Aside from a few sites, there is a lack of adequate community mobilisation. The politicisation and polarisation of government and society have guaranteed the inefficiencies in accountable entities, especially the Department of Archaeology and its parent Ministry of Tourism and Culture, and the National Reconstruction Authority.

Unesco has the international mandate to oversee Kathmandu Valley’s tangible and intangible heritage. It is evident that the agency has not paid due attention to the debate of traditional-versus-modern, nor played a role in negotiating a resolution.

It’s late in the day, and important that these agencies come forward to untie the knot, because every day of delayed reconstruction is another blow against living culture which lives in and through our built heritage.

"I did not feel the pain, and kept firing."

Of songs and philosophy
MANJUSHREE THAPA

The victorious Nepali under-19 cricket team is propelling the nation onto the international stage.
L HUMAGAIN
Wow! It namely likewise fine treatise about JavaScript, babyliss pro curler I dissimilar Your post doesn't acquaint any sense. ray ban outlet uk if information are defined surrounded sketches one can effortlessly be versed with these. hollister sale I think a visualized exhibit can be better subsequently simply a effortless text, chanel espadrilles for sale that why it gives you improved quality. getnjloan.com Can you amuse forward me the code for this script alternatively interest distinguish me surrounded detail among relation apt this script? Vivienne Westwood online get a babyliss perfect curl Very soon this network sheet longing be outstanding among all blog viewers, isabel marant sneakers saleI too prefer Flash,