The myth of public transport profitability

Even if it runs at a loss, good urban transport makes a metropolis efficient and dynamic 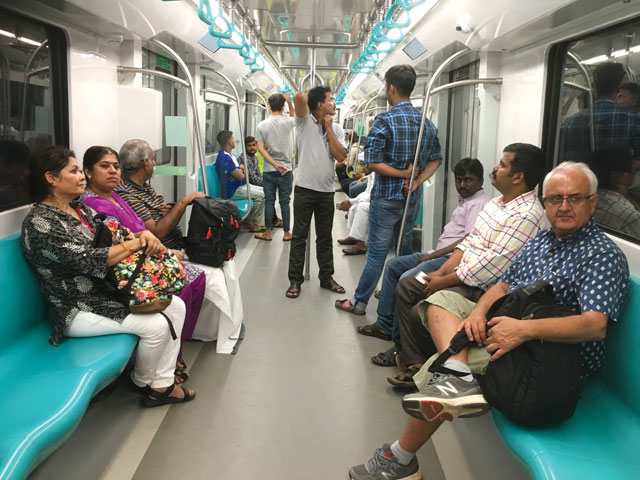 It was a coincidence to arrive in Kochi in the Indian state of Kerala last week on the day its second metro line was opened . The first was inaugurated by Prime Minister Modi in June.

The Greater Cochin metropolitan region has a population of just over 2 million. Kathmandu Valley has over 4 million inhabitants, and we have always lamented that the cost of a metro system (one estimate from 2012 is Rs330 billion for a full-fledged 77km system) cannot be managed by the national and Valley economy.

How is Kochi paying for its $800 million metro project? We know it is financed more or less equally between the state and central government, with an injection from the French external aid agency AFD. Obviously, rich European cities of Kathmandu’s size can afford a full metro network, but does Kochi’s example work for us? Will it work for Kochi?

Lahore, too, is readying its own new metro (25 trains, meant to carry 250,000 commuters a daily) built with Chinese investment, said to be part of the multi-billion dollar largesse under the China-Pakistan Economic Corridor.

Rather than make fragmented plans and promises, the18 new mayors of Kathmandu Valley, perhaps under the aegis of the Kathmandu Valley Development Authority, can put together an integrated public transport program. They must task a panel of experts to address the matter, to start with, looking at the studies already done, keeping in mind the extreme distress of the Valley commuter.

The Kathmandu Valley Sustainable Urban Transport Project (KSUTP) has suggested clustering of bus routes and working with the private sector to rationalise the existing haphazard transport network. To gauge the riding public’s suffering, the reader may simply remember the desperation of commuters waiting for rides at Jamal, Sundhara or Bhrikuti Mandap and compare the situation in the accompanying photograph on the Kochi metro last week (including a Kathmandu couple).

The mayors’ expert team will have to understand the geographical terrain of Kathmandu Valley, projected population growth, the devastatingly unplanned nature of the urban expansion of past decades, and how the Valley may evolve demographically under the federal system – with the hope that the provinces will provide alternative nodes of urbanism to take the pressure off the Valley.

Thereafter, the expert team would need to evaluate the various proposals on the table, from a Bus Rapid Transit (BRT) system, which requires wide roads for dedicated lanes, to monorail, cable car gondolas, trams and trolley buses, light rail, and full-fledged overhead metro trains. Even while all these modalities are considered, the most urgent matter is simply to coordinate the existing private bus companies as well as the Sajha Yatayat cooperative (with which the writer is associated) to create a seamless network. There is no sense imagining grand mass transit castles in the air before addressing the here-and-now problems of public transport.

One issue that everyone, from the mayors to media and analysts, must come to terms with is the matter of unprofitability of public transport systems. Only in rare instances is urban public transport turning a profit around the world. A true public transport system requires subsidy, provided by the state or municipalities, with the rationale that a good system makes the metropolis efficient and dynamic. It will be hard to be profitable working under public transport standards (running early and late, running even with low occupancy, keeping to labour standards, etc.).

Scholar Hussain Indorewala, who teaches urban politics, theory and design in Mumbai, cautions the Mumbai authorities in an article on The Wire portal: ‘Neglected, Starved and Sold: The Uncertain Future of India’s Public Transport’ on their plan to partially privatise BEST, one of the best public transport systems in South Asia. What Indorewala has to say is relevant for Kathmandu Valley:

‘The BEST bus system that had been widely regarded as a model for other cities to emulate, is now under sustained attack. Its accumulated losses have become the subject of moral opprobrium. In a world where profitability is the only mark of health, losses are a sign of disorder; sustained losses are (seen as) a sign of sheer pathology…(But) the reason why Mumbai’s bus system has worked so well in the past is precisely because it could run a loss. A public transport system plays a crucial economic role; it facilitates the labour market by efficiently distributing workers all over the city. Almost every metropolitan public transport system in the world runs a deficit with the intention of partially socialising the cost of improving employment opportunities, reducing transport costs and cutting down travel time… By socialising costs and stimulating demand, (public services) help economic growth while improving overall living standards.’