Salute to the people 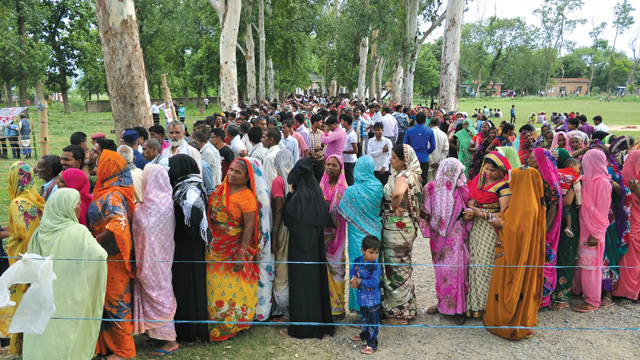 Again and again, Nepal’s citizens save the day. When politicians turn craven, civil society loses humanitarian spine, and academia fails to stand up for reason and democracy, it is the people who rise and reject autocrats who conduct coups. They show resilience when blockades are implemented, and refuse to turn ‘communal’ when all kinds of forces national and international seek to stir up communities against each other.

Indeed, the God of Mischief living in the netherworld would be exasperated with the population category known as ‘citizens of Nepal’, of mountain, hill and plain. This cohort refuses to succumb to radical populism even as the politicians and intelligentsia fall like ninepins, see things crystal clear when the lenses of the consultant-scholars are clouded with paisa, pre-judgement and prejudice.

So, the Madhes-badi leaders may shout from the rooftop that it was they who shut down the southern border in 2015. But no one except a few befuddled sahibs believed the foisted narrative, that the Madhesi citizens were blockading the montane (Pahadiya and Himali) population. The Kathmandu state has a lot to answer for when it comes to the marginalised Madhes, but let us also be clear that the plains people were not the blockaders.

A ‘people’s movement’ is not possible to mount with regularity, so the people do look forward to elections to express their orientation. After doing so in 2013 for Constituent Assembly II, they waited for local government elections to happen, which had been hanging fire for two decades. The people all over wanted these polls – only some politicians thought otherwise, and were aided by the positioning of certain embassies and donor entities who are required at this time to go into deep introspection.

The local elections were finally announced, but then many sought to help the Madhes-badi leadership by forcing the break-up of announced local polls first into two, and then three phases. All along, they sought to buttress those plains-origin leaders who had lost in the 2013 elections and suffered from a severe case of ballot phobia – they would prefer provincial elections and forgotten about local government in toto.

Meanwhile, big-party politicians had milked the exchequer for years through the ‘all-party mechanism’ and its divide-the-spoils corruption. In their heart of hearts they too disliked the local polls, but they knew that they had stretched the public’s patience too far. And yet, they prevaricated.

What happened was travesty. Elections were not only into three in phases, with the danger of dividing the country by ‘altitude-communalism’, the Election Commission allowed the results of one phase to be counted and announced before the conduct of the next phase. Many principles of democratic elections were thrown out of the window as the Commission stooped to the whims of the ruling regime – best seen in the call for re-elections in one Chitwan poll centre where Maoist goons tore up some ballot papers.

But the Nepali voters are capable of over-riding the unaccountability of the politicians, bureaucrats and commissioners. Even as everyone and his cousin tried to sabotage the polls, the people circumspectly accepted the first phase and delivered 73 percent participation on 14 May. They bided their time, and went in for the second phase of elections on 28 June, delivering 70.5 percent.

The ‘altitude-communalists’ were most distressed as Wednesday dawned, and more so as the Madhesi, Tharu, Musalman and Pahadiya of the plains participated with enthusiasm. The self-belief of the Nepali people there and elsewhere had once again overcome odds presented not only by our own but also by the naysayers in the international community, who supported agitators and provocateurs.

One can expect that the long-suffering public of Province 2 will go to vote as did the people of Provinces 1,3,4,5,6 and 7. They will reject the attempt to leave them as second-class, non-voting citizens and cannon fodder for politicians and parties, this embassy or that ‘consultant activist’, and they will come forth to the elections on 18 September.

The people have shown that they are willing to go to polls in the middle of the monsoon and amidst paddy planting, and this has itself been an amazing breakthrough that allows more flexibility in future elections. Using the precedence of 28 June, and given the unfairness of pushing Province 2 elections to faraway September, one may ask the powers that be to consider bringing the date forward.

With the three phases of local elections over, Nepal will finally be on its way to implementing the Constitution, with provincial and national elections to happen in rapid succession by January 2018. The goal is the full post-conflict, post-transition normalisation of Nepali politics, which can only happen when we have a new Parliament rather than the extended Constituent Assembly that is the House of today.

The new Parliament will allow us to focus on a world beyond politics, and more than the politicians it is the will of the people that will see us through.

Polling in the rain

Ordinary Nepalis seem to have inherently more common sense than the politicians who represent them.

Motorcycling across Nepal is a great way to be reminded of this country's amazing social harmony
NARESH NEWAR
Wow! It namely likewise fine treatise about JavaScript, babyliss pro curler I dissimilar Your post doesn't acquaint any sense. ray ban outlet uk if information are defined surrounded sketches one can effortlessly be versed with these. hollister sale I think a visualized exhibit can be better subsequently simply a effortless text, chanel espadrilles for sale that why it gives you improved quality. getnjloan.com Can you amuse forward me the code for this script alternatively interest distinguish me surrounded detail among relation apt this script? Vivienne Westwood online get a babyliss perfect curl Very soon this network sheet longing be outstanding among all blog viewers, isabel marant sneakers saleI too prefer Flash,