If Kathmandu doesn’t listen, public anger in the Tarai is going to grow once more to boiling point 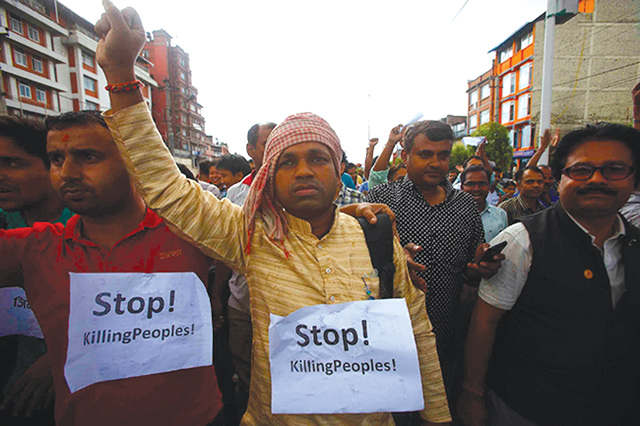 For the last few weeks Madhesi leaders have all been in huddles, planning their next move. The vast silence from the rulers in Kathmandu, the lack of confidence-building and an almost deliberate effort to ride it out has made the Madhesi parties suspicious.

The uncertainty also seems to have made the foreign policy-intelligence establishment in New Delhi a bit jittery again. Why else would they slip in a paragraph about Nepal in a long list of other bilateral matters in a communiqué during Prime Minister Narendra Modi’s visit to the EU in Brussels?

The Madhesi leaders seem fed up with being ignored, and there is a sense of desperation since the wind has been taken out of their sails and it will be difficult to fan another agitation in the plains right now. However, the anger is simmering just under the surface and all it needs is another spark.

For now the Madhesi Front has warned of another forceful protest after the New Year if the government keeps ignoring its past commitments. These have to do with further amendments to the constitution to address, mainly, the issue of  demarcating the two Tarai provinces. This the most contentious among the demands for which the Madhesi Front agitated for nine months and blockaded the border.

Back then, they tried to make it clear that they hadn’t given up their struggle, just the mode of protest. But the Oli coalition seems to see this as a time-buying strategy and is fast losing the little trust it had among Madhesi leaders. They see no progress has been made in the last two months, and some in the Front find no other recourse but to launch an even more hardline movement.

Madhesi leaders I’ve spoken to in the past weeks say they have no trust in the government, especially Prime Minister Oli, to meet their political demands. The only thing holding them back is a realisation that the Madhesi people have had enough with agitations for now, and want to get on with their daily struggle for survival without distruptions.

However, they also know that the Tarai will never have permanent peace or prosperity without a structure that guarantees federal autonomy from Kathmandu. It has come to a point where destabilisation is necessary to create the conditions for their demands to be met.

The plains are still not back to normal. The main political parties cannot move around freely or hold public meetings. Government offices function sporadically, and the people have been deprived of basic services.

Recently, the Madhesi leaders had a conclave with members of sympathetic national civil society to see what kind of agitation would make Kathmandu’s rulers listen to them.

They have now formulated a phasewise protest plan that will start with hunger strikes in district headquarters of Tarai districts. The week after that they plan to close down all local government offices, except schools and hospitals. And if Kathmandu still doesn’t listen they want to launch an indefinite strike in the Tarai.

Santosh Mehta of the Sadhbhavana Patry told me: “Kathmandu will only respond to pressure from the ground, they are charging and detaining local leaders without any evidence.”

Madhesi leaders handed over a memo to PM Oli this month, asking to end “state terror” in the Tarai. If the government doesn’t listen, public anger is going to grow once more to boiling point.

There is still time for the Oli administration to defuse the situation and hold genuine dialogue, even though Madhesi intellectuals have little trust in him. This is a dangerous situation for the Madhes, for the government and for Nepal.

What next in Madhes?, Jiyalal Sah

Maoist ideologue Baburam Bhattarai returns to these pages to answers our questions on whether the past ten years of conflict have been worth it, on the 12-point agreement with the parties and on the relevance of Maoism in this day and age.

A revolution that devours children

The return of the vigilantes

Another spiral of violence and revenge
JB PUN in RUPENDEHI
Wow! It namely likewise fine treatise about JavaScript, babyliss pro curler I dissimilar Your post doesn't acquaint any sense. ray ban outlet uk if information are defined surrounded sketches one can effortlessly be versed with these. hollister sale I think a visualized exhibit can be better subsequently simply a effortless text, chanel espadrilles for sale that why it gives you improved quality. getnjloan.com Can you amuse forward me the code for this script alternatively interest distinguish me surrounded detail among relation apt this script? Vivienne Westwood online get a babyliss perfect curl Very soon this network sheet longing be outstanding among all blog viewers, isabel marant sneakers saleI too prefer Flash,