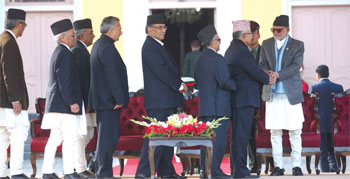 BIKRAM RAI
Nearly three months after elections, Nepal got its 37th prime minister in Sushil Koirala on Tuesday. That makes six PMs in six years. But no sooner had the voting concluded in the CA hall, a bitter but all-too-familiar turf war erupted between the UML and Nepali Congress over ministerial portfolios.

So far, Koirala has rubbished the UML’s claims of an unwritten agreement on naming Bamdev Gautam the Home Minister in the new cabinet. Senior leaders within the NC also argue that the portfolio should stay within the party so as to establish a political culture. UML leaders, on the other hand, have refused to join the government unless the NC yields to its demands. Earlier, the UML mysteriously dropped its insistence on a new election for president, ostensibly after NC assurances that it would get Home.

The Home Ministry has been a coveted bastion of power and wealth with the Police, APF, intelligence services, and 75 Chief District Officers under its direct control. And with local elections slotted for later this year, whoever lands the job will yield considerable influence on the future course of Nepali politics. The NC’s humiliating defeat in the local polls of 1997 when Gautam was Home Minister, means that the party is extremely averse to see the man who knows all the tricks of the trade back in the same ministry.

While it’s not surprising that this particular portfolio is being so fiercely contested, Koirala and UML Chairman Jhalanath Khanal are also using the pretext of an inter-party feud to buy time as they settle disputes within their own ranks. With the NC, General Secretary Prakash Man Singh and nephew Shekhar Koirala are both vying for the lucrative post. Similarly, Khanal who lost the UML parliamentary party leader elections to KP Oli last week, might not be too keen to hand over such a vital ministry to Bamdev Gautam, who is Oli’s strongest ally.

Prime Minister Koirala’s first order of business is to untangle the Home Ministry knot. Then he has to sort out the allotment of other powerful portfolios and that, we know from experience, can be a long-drawn process. There is a real danger that Koirala might fall into the same trap as his UML-counterpart Khanal, who spent nearly half his six month long stint as PM in 2011 trying to form a full cabinet.

For most of his 60-year political career, Koirala has been content playing second fiddle, working quietly in the background. Now that he is the top boss, it’s time to exhibit the kind political acumen that has been often missing from Nepal’s leaders and be willing to assert his authority on a polity with deep cleavages. His major challenge will be to reconcile with and work alongside key political players like the UCPN (Maoist), RPP-N, and Madhes-based parties who all voted against him.

Unlike many of his predecessors in Baluwatar, Koirala is free from the shackles of past mistakes and has the support of almost three-fourth of the assembly as well as the general public. The septuagenarian leader might have a hard time remembering all the seven point and five point deals that his party has signed on till date, but if Koirala can deliver on just three goals by February 2015 - conducting local elections, completing the new constitution, and providing basic services and safety to citizens - he will have achieved what even his illustrious cousin, Girija Prasad, couldn’t and Nepalis will remember him as a great statesman.

Where justice is a game

"A sense of belonging"

The singer of the hit song Phoolko Ankhama, is coming to Nepali readers as a writer

Collection of Wayne Amtzis poetry looks at Nepal's war in the context of the unhappy peace that preceded and followed it
Wow! It namely likewise fine treatise about JavaScript, babyliss pro curler I dissimilar Your post doesn't acquaint any sense. ray ban outlet uk if information are defined surrounded sketches one can effortlessly be versed with these. hollister sale I think a visualized exhibit can be better subsequently simply a effortless text, chanel espadrilles for sale that why it gives you improved quality. getnjloan.com Can you amuse forward me the code for this script alternatively interest distinguish me surrounded detail among relation apt this script? Vivienne Westwood online get a babyliss perfect curl Very soon this network sheet longing be outstanding among all blog viewers, isabel marant sneakers saleI too prefer Flash,