Nuisance value as a strategy

What do you expect from someone who still admires Mao and Stalin? 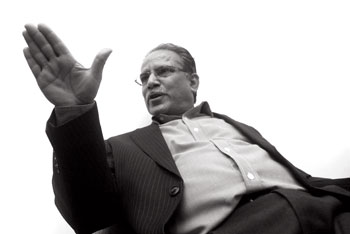 BIKRAM RAI
The UCPN (M)’s crushing defeat in November’s elections not only consigned the party to the margins of the CA floor, but for the first time since the 2000s the Maoists found themselves outside the purview of mainstream media and our common conscience.

Chairman Pushpa Kamal Dahal, who is known to revel in public adulation, was conspicuous by his absence. When he did make a comeback this week with interviews to two Nepali papers, he refrained from his usual angry diatribe and hyperbolic rhetoric. But if you thought a few months of introspection had turned Dahal into a changed man, you couldn’t be more wrong.

The Chairman admits the party’s weak organisation, internal strife, and eventual split with Mohan Baidya-led faction are the root causes for loss in elections. But from accusations about election fraud to foreign conspiracies, Dahal still believes outside targets had a greater influence on election results. And even as he talks about wanting to reinvent the party by improving its grassroots structure and giving chance to young blood, he is adamant about carrying on as chairman after 25 years in power because he feels no one else is deserving of the top post.

What’s more, Dahal says if Mao and Stalin could lead their parties all the way to their graves, there is nothing wrong with one-man rule. Not too surprising a statement from someone who rejects pluralism, is still living in a time warp, and insists on calling himself a commander who lost one battle (elections), but not the war. Dahal’s strategy now is to use his nuisance value.

He acknowledges that the party’s overconfidence and misjudgment of its popularity among the masses cost the UCPN (M) dearly. But if Dahal was honest about wanting to rebuild trust and goodwill among the public, he should have realised that local elections is the need of the hour. Instead, he wants to postpone local polls until the new constitution is completed. His argument is that since local bodies have been without elected representatives for 16 years, another year won’t really matter and bitter rivalries that are likely to crop up during elections will derail the constitution drafting process.

However, Nepalis had made it very clear to the candidates during last year’s campaign trail that accountability at the local level and delivery of basic services, not the constitution, were their main priorities. Himalmedia Public Opinion Poll of February 2013, which interviewed 3,500 Nepalis nationwide in 38 districts, reflected a similar public sentiment. The survey showed that six in every ten respondents wanted elections for local councils to be held ‘immediately’, without waiting for Constituent Assembly polls. A further 14 per cent wanted polls after the CA elections, but before general elections.

The acrimonious and beleaguered political process of the past six years has made Nepalis cynical about whether this government can deliver a new constitution by the end of 2014. It took us three months after elections just to settle on a prime minister, we then squandered another few weeks haggling over ministerial portfolios, the 601-member CA is still incomplete, and we haven’t even reached the crux of the constitutional debate yet - federalism and state restructuring - issues that proved to be so divisive last time that the assembly had to be dissolved.

With the constitution still a long way to go, election for local bodies should be the next natural step in getting Nepal’s democracy back on track. That way whatever happens in the halls of BICC, development and day-to-day functioning of towns and VDCs will be in the hands of ordinary citizens.

However, with the possibility of unification with the CPN-M looming, Dahal might forgo national interests and toe the line of the hardline Maoists to gain sympathy of Baidya & Co. Doing so will be inimical to Dahal and his party’s cause though. And this time, the Maoists won’t even have to wait until elections to hear the people’s verdict.

The revenge of the radicals, KANAK MANI DIXIT

Phone-in to have your future foretold

Up close and personal with the eclipse

A wacky, but poignant and fitting, tribute to MJ's life that MJ himself created
A. ANGELO D'SILVA
Wow! It namely likewise fine treatise about JavaScript, babyliss pro curler I dissimilar Your post doesn't acquaint any sense. ray ban outlet uk if information are defined surrounded sketches one can effortlessly be versed with these. hollister sale I think a visualized exhibit can be better subsequently simply a effortless text, chanel espadrilles for sale that why it gives you improved quality. getnjloan.com Can you amuse forward me the code for this script alternatively interest distinguish me surrounded detail among relation apt this script? Vivienne Westwood online get a babyliss perfect curl Very soon this network sheet longing be outstanding among all blog viewers, isabel marant sneakers saleI too prefer Flash,