In an unresponsive state 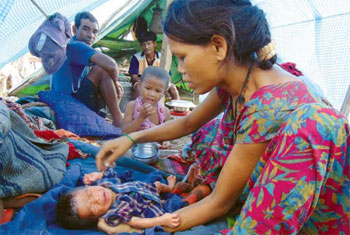 TUFAN NEUPANE
LUCKY TO BE ALIVE: Indriya Tharu, 22, of Bardiya tends to her newborn son inside a roadside tent after escaping the flood on 14 August with her family. In Bardiya alone, 21 bodies have been found, 18 are missing and 14,000 people have been displaced.
At the behest of the UCPN (Maoist) Chairman Pushpa Kamal Dahal, the CA has been adjourned for a week until Monday so as to allow lawmakers from disaster affected regions to return to their constituencies and help with rescue and relief efforts.

From the landslide at Jure, Sindhupalchok earlier in the month to the devastating floods across the mid-western districts of Surkhet, Bardiya, Banke, and Dang this week, August has been marred by tragedies.

To make things worse, the state has been painfully slow in providing basic necessities to survivors and ensuring their safety. Even as families grieve the loss of their loved ones, thousands find themselves battling for survival: living on the roadsides in makeshift tents, with little to no food, among growing fear of cholera and other water borne diseases.

For leaders who have insulated themselves from the average citizen, going back to the people who elected them will provide a much needed reality check. However, given our VIP culture, there is a real danger that resources and manpower meant for disaster relief could be channeled towards chaperoning CA members in the districts and the whole exercise might end up being just another photo-op.

Also in the name of reaching out to victims in remote villages, senior party leaders might be tempted to charter helicopters at the expense of taxpayers like they did during their election campaigns last year.

With five months remaining before the 22 January deadline to draft a new constitution, there is also a case to be made that the parliamentarians should have stayed in the capital and focused at the task at hand. They could have organised national donation drives from Kathmandu and pressurised the government to ease all bureaucratic hurdles so that authorities in the districts could do their jobs smoothly.

Part of the delay in finishing the constitution arises from the fact that our CA and parliament are one and the same. In the absence of locally elected bodies, CA members also have to take on the role of being the sole representatives of their constituencies.

But much of their misery is self-inflicted. Despite being the second highest-paid government officials after ministers, parliamentarians have wasted precious time trying to armtwist the government into providing Rs 50 million each as constituency grants and bickering over petty perks like personal laptops and internet connection.

In June, the UCPN (M) along with other parties held the assembly hostage for nearly two weeks until their demands were fulfilled. Then the UML’s extended general convention and party elections in July meant many of its parliamentarians simply excused themselves of their CA duties for weeks and the announcement of the budget also had to be delayed. This week, the UML created yet another distraction by embroiling in a meaningless argument over re-endorsing the president and vice president through the CA as stated in its seven-point deal with the NC.

While the CA members are quick to stand up for their rights, fulfilling responsibilities does not come as easily to them. Even nine months after polls, it’s a disgrace that the assembly is still 26 members short because the major parties are undecided on whom to nominate. Lawmakers are shamelessly ignoring the Supreme Court’s order in May to fill the vacant posts within 15 days.

Between three weeks of Dasain-Tihar-Chatth festivities in October and then the distractions of the two-day SAARC summit in Kathmandu in November, there really isn’t much time left. And yet  parties are still stuck in ‘deliberation mode’ over pivotal issues of forms of governance, number of states, electoral system, and establishment of a constitutional court.

It’s as though they want to stall the public until it’s too late and we have no choice but to accept a document cobbled together through a 12th hour backroom deal like they tried in 2012.

Politicians don't know how to tame militant unions that they unleashed
ARTHA BEED
Wow! It namely likewise fine treatise about JavaScript, babyliss pro curler I dissimilar Your post doesn't acquaint any sense. ray ban outlet uk if information are defined surrounded sketches one can effortlessly be versed with these. hollister sale I think a visualized exhibit can be better subsequently simply a effortless text, chanel espadrilles for sale that why it gives you improved quality. getnjloan.com Can you amuse forward me the code for this script alternatively interest distinguish me surrounded detail among relation apt this script? Vivienne Westwood online get a babyliss perfect curl Very soon this network sheet longing be outstanding among all blog viewers, isabel marant sneakers saleI too prefer Flash,