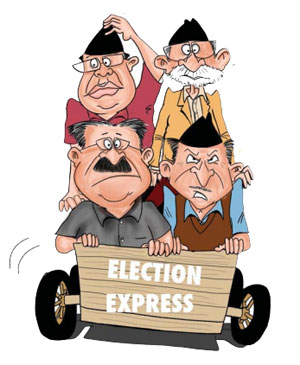 DIWAKAR CHETTRI
Unlike the 2008 elections, this month’s second attempt at electing a new Constituent Assembly is a predominantly male affair. ‘Weak’ women candidates are being fielded against top national leaders in the direct ballot and female candidates in the PR lists are mostly there because parties are required to fulfil their quotas.

Out of over 6,000 candidates from 130 parties who registered for the First Past the Post (FPTP) race this year about 600 are women. This gender imbalance existed in the 2008 elections too, but what has changed is the commitment of the three major parties in upholding gender parity. All three have cut down on their FPTP tickets for females: 21 and 24 women respectively from the NC and UML, down from 26 and 27 five years ago.

The most glaring change is in the UCPN (M) which had 43 Maoist women candidates running for direct polls in 2008, but has slashed that to 26 this time. Fresh out of the jungles, the Maoists must have felt compelled to maintain their revolutionary zeal, even if symbolically, since one third of their guerrilla force was female. However, during its seven years of mainstream politics, the party has proved that its commitment to equality and fairness is just lip service.

What message does it send to young women across Nepal when a party gives the green signal for its male leader to contest elections from two constituencies and then turns to its female cadre and tells them they cannot have tickets?

Theoretically, Nepal should have no problem surpassing the 33 per cent female representation in the CA, stipulated by the interim constitution. Of the country’s 26 million population, more than half are women and there are 6.1 million registered female voters this year compared to 5.9 million male voters. But pushing women onto the assembly floor en masse through proportional representation seats just for the sake of meeting the quota is pure tokenism.

To really gauge how much progress women have made and how ready Nepali society is to see women in positions of high political power, far larger numbers of female candidates need to compete against each other and against men in the FPTP race.

They don’t have to be professional politicians, but they also shouldn’t be handpicked daughters and wives with no other qualification than blood ties to influential male politicians. This encourages nepotism and corruption. In a country where mothers’ groups and female health volunteers have improved development indicators of many rural communities in the absence of the state, there should really be no dearth of potential candidates.

Some of the 600 female contenders in the upcoming November elections will be competing against male political heavyweights in their constituencies. For example, Pratima Gautam of the NC and former parliamentarian Nilam Barma of the National Madhes Socialist Party will have to face senior UML leader Madhav Kumar Nepal in the Kathmandu 2 and Rautahat 1 constituencies.

While these seemingly uneven match-ups pose a challenge, female candidates can still hope to win through strong and strategic campaigning. The playing field also needs to be levelled where resources are concerned. While her male counterparts travel in helicopters and SUVs with large entourages, former CA member and current candidate for UML in Dang 2 Shanta Chaudary has to go door-to-door on foot asking for rice so that she can finance her campaign. This is where the Election Commission should step in. While the exhaustive election code of conduct lays down rules on even the colour of pamphlets, why can’t it stipulate that all candidates get equal campaign funding from the mother party regardless of gender or seniority?

Even if female candidates end up losing this November, math needs to be used more favourably in the future: if more women contest overall, the representation will eventually balance out. And although the experience of our South Asian neighbours has shown that having women in top political posts does not automatically translate into gender parity, it won’t hurt to give them a chance.

The Heritage Kitchen and Bar

Quick, friendly service, good Thai food, and the charm of the refurbished old Newari building will keep you coming back for more
SOMEPLACE ELSE by RUBY TUESDAY

This interesting hybrid of suspense and near farce film about a covert CIA operation cements Ben Affleck's reputation as an actor and director
SOPHIA PANDE
Wow! It namely likewise fine treatise about JavaScript, babyliss pro curler I dissimilar Your post doesn't acquaint any sense. ray ban outlet uk if information are defined surrounded sketches one can effortlessly be versed with these. hollister sale I think a visualized exhibit can be better subsequently simply a effortless text, chanel espadrilles for sale that why it gives you improved quality. getnjloan.com Can you amuse forward me the code for this script alternatively interest distinguish me surrounded detail among relation apt this script? Vivienne Westwood online get a babyliss perfect curl Very soon this network sheet longing be outstanding among all blog viewers, isabel marant sneakers saleI too prefer Flash,