Back to square zero

For every step we take forward, we seem to take two back 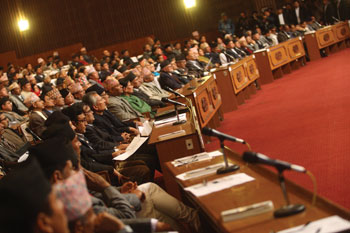 However, for every step we take forward, we seem to take two back. At the second session on Wednesday, the proposal put forth by the NC, UML, and UCPN (Maoist) to officially adopt the agreements and achievements of the first CA, was immediately shot down by RPP-Nepal and Rastriya Janamorcha, both of which campaigned against federalism.

The Big Three had it coming. The proposal was conceived through their usual high-handed method: a day earlier their leaders gathered behind closed doors at the Peace Secretariat. When the public mandate clearly needs all political actors to work together transparently, such clandestine meets outside of the CA undermine democratic norms and deepen the chasm of mistrust among the parties.

If there is one lesson for leaders from the previous failed attempt at constitution writing, it is that Nepal needs conciliatory, inclusive politics and not cliques and cartels. The High-Level Political Committee or whatever vague euphemism its creators come up with, needs to be disbanded immediately.

The RPP-N’s Kamal Thapa has always maintained that the secular federal republic agenda was forced on Nepal by the Maoists and the country can’t be tricked twice. And now that his party is the fourth largest force in the House, he intends to use his clout. The three Madhes-based parties are on the cusp of unification, so Thapa’s influence could wane. Which is why he wants to move quickly to ensure that unlike the previous CA, there will be an actual constitutional debate on secularism versus Hindu state.

But Thapa’s insistence on starting constitution-drafting from a clean slate is sure to delay the document. For all practical purposes, CA-2 is an extension of its predecessor. And while it is true that 80 per cent of the current CA members are fresh faces, Nepal’s political landscape hasn’t changed so drastically that we have to go back to square zero.

The problem, however, is that political parties here have no culture of shared ownership, every leader wants his stamp of authority on the constitution and refuses to learn from past experiences. As a result, the 1990 constitution was completely chucked aside because it was from the old regime, when we could have easily recycled many of the functional features of that document. Similarly, right before the previous CA was dissolved in May 2012, the UML and NC engaged in irresponsible brinkmanship because they were averse to seeing a ‘Maoist’ constitution.

But the constitution is not a one-man, one-party document, it belongs to all Nepalis. This is not the time to dismantle the good work done by previous committees, rather the new parliamentarians should focus on building upon former achievements and retaining the positive and progressive draft statutes in full from 2008. This way, the debate in the next 12 months can remain fully centred on untangling the difficult knots of federalism, state restructuring, boundaries and names of future federal provinces. Otherwise, the previous six years will have been a waste of time and money.

The constitution is also not the end goal, devolution of power is. Setting up provincial governments and shifting the state machinery away from Kathmandu will require at least five years no matter what names we give to the future states or how many pieces we carve the country into. We’ve nearly exhausted the time limit for the paper, we need to move into action soon.

The ones who got away, Kantipur, Nagarik

Babaram Baniya, March 10
Wow! It namely likewise fine treatise about JavaScript, babyliss pro curler I dissimilar Your post doesn't acquaint any sense. ray ban outlet uk if information are defined surrounded sketches one can effortlessly be versed with these. hollister sale I think a visualized exhibit can be better subsequently simply a effortless text, chanel espadrilles for sale that why it gives you improved quality. getnjloan.com Can you amuse forward me the code for this script alternatively interest distinguish me surrounded detail among relation apt this script? Vivienne Westwood online get a babyliss perfect curl Very soon this network sheet longing be outstanding among all blog viewers, isabel marant sneakers saleI too prefer Flash,