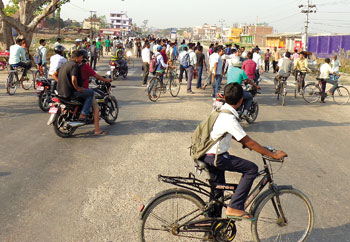 SURESH YADAV/NAGARIK
DHANUSHA -- While 50,000 plus students who took their SLC examinations last month anxiously await their results, 1,070 students from three centres in Dhanusha district still have their Social Studies paper to complete.

On early morning of 25 March, during a quotidian security check at centre ‘Kha’ in Yadukoha, parents became unnerved when police frisked their children, which then led to a heated argument and scuffle between the guardians and female police. The tension spread to the other two centres and, unable to control the belligerent crowd, security personnel opened fire at the exam hall in nearby Dhabauli injuring two students.

Seeking to defuse the crisis, officials from the CDO, District Education Office, and the police assured students and parents that there would be a retest and convinced them to let the remaining exams proceed peacefully. However, more than a month after the event, the future of the students remains in limbo. In the past weeks, student unions have shut down schools in the district and announced a general strike to pressurise the government to take quick action.

A three-member probe committee set up by the Ministry of Education arrived in Janakpur on Wednesday to assess the situation and prepare a report. It is baffling that an examination board with decades of experience does not seem to have a clear action plan or guideline in the case of an emergency when exams are disrupted and questions are released early like in Dhanusha.

“We didn’t make any promises of retest that day because we don’t have the authority to make such decisions. We told guardians that we would recommend the Office of the Controller of Examinations in Kathmandu to let the students retake their Social Studies exam,” says CDO Hari Prasad Mainali. “Now it is up to the SLC board to decide.”

The state’s lackadaisical attitude and sluggish response have disheartened students and guardians. According to student leader and youth activist Saroj Mishra, the minister of education Chitralekha Yadav wasn’t even aware of the confrontation until very recently when she came on an official visit to Janakpur.The NC’s Ram Krishna Yadav, who won 2013 elections from Dhanusha-2, did raise the issue on the CA floor, but most Tarai-based parties and politicians have remained shockingly mum.

The future of thousands of students is at stake, many of whom see passing their SLC exam as a way to break out of the cycle of poverty despite the staggeringly low pass rates. It is at times like these when political parties’ grandiose promises of promoting the Madhesi identity and bringing the concerns of historically marginalised groups into the national mainstream ring hollow.

The unfortunate event at Yadukoha and Dhabauli once again highlight unwarranted police brutality and impunity in the region. The police could have fired tear gas or used rubber bullets to disperse the crowd. Instead they resorted to firing live rounds into an unarmed group of agitated parents and students.

“Yes, parents and students were also at fault, but so far nobody has even bothered to find out who was responsible for the shooting. The state is trying to cover up the police’s misdeeds” says Mishra.

The government needs to move swiftly and make a decision not only on the fate of the 1,070 students, but also prosecute the police personnel who pulled the trigger.

The business of SLC ASHUTOSH TIWARI

This time it is nothing less than the future of our freedoms that is at stake.
CK LAL
Wow! It namely likewise fine treatise about JavaScript, babyliss pro curler I dissimilar Your post doesn't acquaint any sense. ray ban outlet uk if information are defined surrounded sketches one can effortlessly be versed with these. hollister sale I think a visualized exhibit can be better subsequently simply a effortless text, chanel espadrilles for sale that why it gives you improved quality. getnjloan.com Can you amuse forward me the code for this script alternatively interest distinguish me surrounded detail among relation apt this script? Vivienne Westwood online get a babyliss perfect curl Very soon this network sheet longing be outstanding among all blog viewers, isabel marant sneakers saleI too prefer Flash,