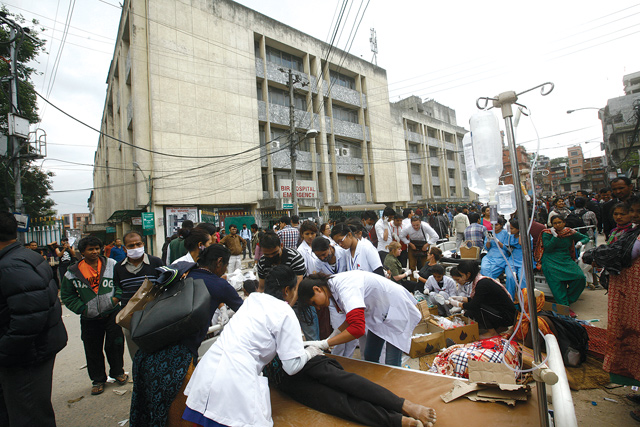 Tragic and destructive as the 25 April earthquake was, it wasn’t a surprise. Everyone knew it was coming. But question is whether the Nepal government heeded the warnings and the advice it had received. Would this have reduced the death toll, injuries and damage and possibly reduced the misery of thousands of families still living in shelters in the rain? As with all disasters, it was the poorest segment of society that bore the brunt of the consequences. Survivors initially went without food and shelter, and many are still at the mercy of the elements.

It was back in 2001 that the UN’s Kathmandu Valley Earthquake Risk Management Project started preparations to upgrade the capability of the government and people to the expected Big One. Back then we estimated that if a 1934 Great Earthquake were to be repeated, there would be 40,000 deaths and 95,000 injured. More than 60 per cent of the existing buildings would be destroyed, many beyond repair, leaving 600,000 to 900,000 residents homeless. In Bhaktapur alone, more than 75 per cent of the residences would be heavily damaged. Half of the bridges and many narrow roads in the valley could be blocked to rescue vehicles because of debris.

Even though the liquefaction susceptibility was deemed to be very low around Tribhuvan International Airport, the runway was expected to buckle and the airport to become unserviceable, isolating Kathmandu from the rest of the world. Blocked highways and destroyed bridges would further cut the capital off.

A JICA team conducted a detailed study in 2000 of three fault models and calculated the destructive force of future earthquakes. For comparison, a fourth scenario looked at the damage if a 8.4 magnitude 1934 quake were to be repeated. The report said such a quake would result in 19,523 deaths and 136,474 damaged buildings because it downscaled the potential of liquefaction in Kathmandu Valley.

Even so, a month later, the UN issued a Disaster Response Preparedness Plan which stated:

1. ‘No-one questions that earthquakes are an unavoidable part of Nepal’s future and many earthquake experts from all over the world believe a major earthquake is likely to occur in the near future. It is thus considered serious enough to warrant active and continuous readiness.’

Although the 25 April earthquake was of a much lower intensity than 1934, it still demands answers as to whether the government paid any heed to any of the recommendations it received over the years. If not, why? And where was the drag preventing it from preparing the nation for a disaster that everyone said was inevitable? An impartial and transparent review is also required to assess if the death toll, injuries and damage to the infrastructure would have been significantly reduced if the recommendations had been diligently implemented.

Such a review would prepare Nepal for the real Big One that seismologists say is still pending, and make viable recommendations. The risk of a major earthquake with frightening humanitarian implications is so high that this country needs to maintain efficient emergency preparedness and standing readiness. The least the government can do is to preposition stocks of food, water, shelter, medicines, fuel as well as earthmoving and lifting equipments with adequate reserves of food in all population centres and along vital highways and airfields.

Gyan Jung Thapa is an ex-Nepal Army colonel and served with the United Nations in Nepal, Gaza and Darfur.

Post-mortem of a disaster, Editorial

"Spring has set in"