Cleaning up our act 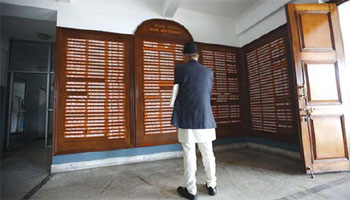 BIKRAM RAI
Business is based on the foundation of social systems. Economic interactions in a society reflect its cultural substrate and are shaped by it. So, if a society has weak ethical values and corruption is the norm, it reflects in the economic domain and vice-versa.

Business also has to work within a legal environment, yet the private sector often takes illegal shortcuts because of its ambition to maximise profit in the minimum time. Recent scandals in Nepal involving CEOs of banks being investigated for irregularities, the Insurance Board having to take over a company, or the Rs 10 billion pending in the Appellate Court under banking crime and fraud have tarnished the image of the country’s private sector.

Among the factors that have fostered corruption and malfeasance, the first is that the income of even senior government officials is too low for them to maintain a decent living standard. The prime minister’s gross salary is Rs 56,200, a minister earns Rs 44,330 a month, a secretary in the bureaucracy takes home Rs 37,390.

Then there are the frequent changes in government. In my three year tenure as president of FNCCI, I have worked with three heads of governments and by the time I leave office, will probably see a fourth. Nepal’s inability to harness its enormous hydropower resources and the 8-16 hours of power cuts a day because of erratic policy is one of the results of this fluidity.

The web of corruption that tangles government and the private sector begins with election campaign financing. The November 2013 election cost Rs 60 billion, candidates for the CA easily spent Rs 20 million each, and all of that money came from businesses who will want to extract their pound of flesh after elections.

It is all about the demand and supply of money. The ambition of politicians creates the demand for money and the private sector provides the supply. The bureaucracy is the go-between to facilitate this transaction. This nexus is the fundamental issue to be addressed when tackling corruption.

Singapore fought corruption on all these fronts: it raised government salaries, instituted quick investigations and convictions of those accused, and the social stigma was so unbearable that one public servant committed suicide. In Nepal, the time has come for the private sector to rise above the profit-only model of doing business. Social entrepreneurship, a strong public service orientation of the private sector, self-adopted environmental and social goals for businesses have to be the norm in the coming years. We understand that merely following the law is not enough, we have to be proactive in enabling ethnical business practices.

The writing of the constitution is an opportune moment to address the vicious cycle of the demand-supply intermediary for campaign funding reforms. Moving forward, there are three steps Nepal can take right away to clean up its act:

1. Electoral funding reform. Provision to be included in new constitution for a financial mechanism whereby the government provides political parties with the resources to conduct their electoral campaigns.

2. Smaller, smarter government. The government of the day stops being an employment agency and cuts the size of the cabinet and the bureaucracy. Downsizing staff and using the savings to up the salaries of existing officials will improve efficiency and clean up government.

3. The private sector must admit there is a problem. Nobody is above the law and the captains of the industry have to walk the talk no matter how big they are.

Suraj Vaidya is the president of the Federation of Nepalese Chambers of Commerce and Industry (FNCCI) and this op-ed is adapted from his keynote address to the conference on Business Ethics for a Prosperous Nepal organised by the World Forum for Ethics in Business in Kathmandu last month.

Cheated of their childhood

There are fewer Nepali boys and girls working, but the ones who do are in dangerous occupations
BHRIKUTI RAI

Financial institutions should piggyback on Nepal's high mobile penetration rate
PAAVAN MATHEMA
Wow! It namely likewise fine treatise about JavaScript, babyliss pro curler I dissimilar Your post doesn't acquaint any sense. ray ban outlet uk if information are defined surrounded sketches one can effortlessly be versed with these. hollister sale I think a visualized exhibit can be better subsequently simply a effortless text, chanel espadrilles for sale that why it gives you improved quality. getnjloan.com Can you amuse forward me the code for this script alternatively interest distinguish me surrounded detail among relation apt this script? Vivienne Westwood online get a babyliss perfect curl Very soon this network sheet longing be outstanding among all blog viewers, isabel marant sneakers saleI too prefer Flash,