Calling Madhesis “dhoti” might still be a popular racial slur, but it doesn’t offend Madhesis anymore 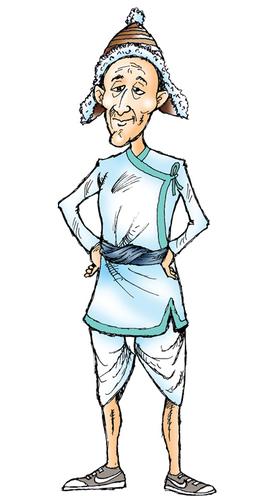 The politics of identity stems from the common grievances of a social group, and can be a struggle against the structural discrimination of the state as well as day-to-day manifestations of inequality. Identity politics strives to make society progressive and inclusive: be it the feminist movement, the struggle for civil rights, the gay and lesbian liberation, or in the Nepali context the Madhes movement.

Some critics (like Bineeta Gurung in ‘What about whataboutery?) offer a reductionist argument that the identity politics in Nepal is a by-product of the Maoist Revolution and that it has outlived its utility like the party itself. It is indeed ironic that people who eschew political philosophy, especially of the left, argue that only ‘class’ is relevant and not the grievances of people with respect to gender, caste, or ethnicity.

Marx’s defense of the class struggle failed to grasp the social reality of the Subcontinent which is inherently different than in the West. Marx did mention caste in some of his writings, but mostly ignored the discrimination based on it. In Nepal, caste and class intersect and cannot be viewed in isolation.

Identity politics attempts to reject the negative attributes offered by the dominant culture and transforms a person’s identity into a sense of pride, without being apologetic about it. For example, dhoti or bhaiya, were once derogatory terms used to address Madhesis irrespective of the class they belonged to. A respected university professor could still be called “dhoti” while in a public bus in Kathmandu. Today, a popular Dhoti movement has reinstated the pride of the cultural attire of the people of Madhes. Calling Madhesis “dhoti” might still be a popular racial slur, but it doesn’t offend Madhesis anymore.

The very notion that to be a Nepali one has to wear a specific set of clothes, speak a particular language, eat generic food and have definite facial attributes, is being challenged because of the politics of identity. It compelled contemporary nationalists to rethink and redefine Nepali nationalism.

Identity politics has made it possible for everyone to know about the customs, languages, and attires of fellow citizens. There was a time, a little more than a decade ago, when Maithili was considered a Bihari dialect instead of a language belonging to Nepal. The demands of proportional inclusion and political representation are extensions of identity politics that demand the recognition of everyone as they are, and not as someone the state once wanted them to be.

To be sure, identity politics has its own pros and cons. One such criticism is that those in favour of identity politics abuse everyone; specially on social media. This claim cannot be denied. However, to blame only one side would be unfair. The Internet is a free space where people express themselves in their own unique ways; some more aggresively than the others. Such aggression is not exclusive to identity supporters alone.

Despite the use of ugly language and abuse, the Internet, however, is only one aspect of society and does not represent society as a whole. People still talk to each other amicably, listen to views irrespective of how irreconcilable differences are.

Another criticism is that identity politics offers a blanket description of a social group which in itself is diverse and hence fails to address underlying sub-identities. In Nepal’s case, the Madhesi identity politics is presented as an example of the eclipsing of the diversity prevalent within the community. But no movement - political or social - has ever denied the presence of the diversity of language, caste or religion. There is more than one Madhes-based political party and the Madhesi Janadhikar Party (credited for the first Madhesh movement) even unified with the Janjati party to form the Sanghiya Janadhikar Forum with Ashok Rai as its vice president.

There is also a need to tackle the social problem of caste-based discrimination in the Madhes, against which prominent intellectuals have started a social movement asking for an apology and sharing meals with people from the Dalit community. This has been followed by official resolutions of ‘apology to the Dalit community’ presented in the general convention of the Terai Madhesh Democratic Party led by Mahant Thakur.

The identity movement is not just about being Madhesi or Janajati, but also about being from the Dalit community or the Madhesi Dalit community or a Madhesi Dalit Woman. Identity politics does not thrive on the dichotomy of ‘either you’re with us or you’re against us’. Did feminism thrive on women over men; the civil rights movement on blacks over whites, or the gay rights movement on homosexuals over heterosexuals?

Feminism never vilified all men, just as the African-Americans didn’t demonise all whites. Instead Bridges were built to transform opinions as well as learn of one’s own shortcomings. To claim that identity politics is dichotomous is not only ludicrous, but also shows the lack of an in-depth understanding of identity politics. The basis of identity politics is change, and most of the time, it leads to an equal, progressive and inclusive society.

The rushed decision to outlaw kingly notes provoked an expectedly frenzied reaction
PAAVAN MATHEMA
Wow! It namely likewise fine treatise about JavaScript, babyliss pro curler I dissimilar Your post doesn't acquaint any sense. ray ban outlet uk if information are defined surrounded sketches one can effortlessly be versed with these. hollister sale I think a visualized exhibit can be better subsequently simply a effortless text, chanel espadrilles for sale that why it gives you improved quality. getnjloan.com Can you amuse forward me the code for this script alternatively interest distinguish me surrounded detail among relation apt this script? Vivienne Westwood online get a babyliss perfect curl Very soon this network sheet longing be outstanding among all blog viewers, isabel marant sneakers saleI too prefer Flash,