“In the UK, we have bad apples in our politics, but in Nepal almost all apples are rotten.” 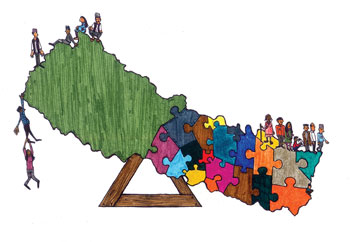 JON APPEL
For the past several years Nepal’s political class has sidestepped the fundamental question about Nepal going federal: Why federalise at all?

Instead, it has busied itself in an interminable merry-go-round about how many provinces, ethnic or non-ethnic, horizontal for one or more Madhes province or vertical to include all geographical regions, and so on. It has ignored past successes with decentralisation.

The exercise reminds us of the saying: ‘If you do not know where you are going, any road will take you there’. The latest Nepali politician to try to sell snake oil is UML vice president Bhim Rawal who seems to want federalism just for the heck of it.

Writing in Kantipur on 5 November, Samridhi ko lagi Sanghiyata (federalisation for prosperity) he says: ‘Federalisation will strengthen national unity, integrity, social harmony, and patriotism and thereby create conducive conditions to demonstrate to the world with pride that it is playing its due role in improving country and society.’

He further assumed, ‘It would steadily end the present poverty, lack of education, unemployment, external dependence, and other factors hurting the self-respect and sense of sovereignty of the Nepali people.’

Clearly, Rawal is doing what a Nepali politician does best: dole out delusional assurances and paranoid panaceas. His assumptions about federalism make it sound like a magic wand. What is more worrying is that Rawal has been known for pragmatism and a rational approach to politics.

So, if this is what Rawal thinks, wonder what misconceptions other politicians have. In his op-ed, Rawal also conspicuously stops short of explaining how his brand of federalism would work – its distinctive attributes and processes -- to ensure the attainment of the lofty goals of better governance and development.

In the first Constituent Assembly, the 43-member State Restructuring Committee that included 17 Maoists and seven UML members, its chair Pushpa Kamal Dahal had agreed that they would present two competing proposals to the full house of the CA to choose from: the Maoists’ 14- province model against NC-UML’s six province idea.

While these two new provinces replaced two existing ones, he also changed two more of the pre-existing 14-province proposal, and Dahal accomplished these somersaults within a 30 minute timeframe. To add to the utter ad hocism and opportunism, the 14-province proposal incidentally also included one curiously named ‘Jadaan’ province.

In the second CA, the Maoists continue to insist on the same 14-province proposal as one of the two options including one for 10 provinces, while the UML now supports NC’s seven-province approach, except that its newly elected president, KP Oli, threw a cat among the pigeons by floating a four-province model, which his own party quickly shot down.

Dahal is not a politician known for consistency. In CA1, he had the numbers to depart from the agreed consensus and go for majority voting in the State Restructuring Committee to humiliate his archrival, the NC. But now that his party has been cut down to size in CA2, and humiliatingly stands only as a remote third behind the UML, he is insisting that consensus alone has to be the basis for state restructuring.

These developments tell a lot about our political class: frivolous to the extreme, hypocritical, myopic, mindless, unprincipled, irresponsible, and of course, corrupt. Nepal may have had political parties and elections for a long time, but we haven’t instilled a democratic culture.

One English visitor to Kathmandu recently remarked, “We too have bad apples in our politics, but in Nepal almost all apples seem to be rotten.” In most other countries, the sovereign conscience of the state kicks in when the politics gets too pervert.

In India, major change occurred democratically with PM Modi emerging with extraordinary majority in the Lok Sabha. There have been changes in Egypt and Thailand in the recent past, albeit extra-democratically. But in Nepal such change does not seem to be in sight, at least, not yet.

Can IT get any worse?

More than 125,000 email users in Nepal may be hit by a 500% increase in a fuzzy government tax.
BINOD BHATTARAI

Hit for all you’re worth

Do you know where your children are?

Talk to your children and watch where they are clicking before we have our first cybercrime.
ALOK TUMBAHANGPHEY

XML is the future of the World Wide Web, says Tim Berners Lee, inventor of the web.
GAURAB RAJ UPADHAYA
Wow! It namely likewise fine treatise about JavaScript, babyliss pro curler I dissimilar Your post doesn't acquaint any sense. ray ban outlet uk if information are defined surrounded sketches one can effortlessly be versed with these. hollister sale I think a visualized exhibit can be better subsequently simply a effortless text, chanel espadrilles for sale that why it gives you improved quality. getnjloan.com Can you amuse forward me the code for this script alternatively interest distinguish me surrounded detail among relation apt this script? Vivienne Westwood online get a babyliss perfect curl Very soon this network sheet longing be outstanding among all blog viewers, isabel marant sneakers saleI too prefer Flash,