Nepal tops the list of countries with the most public holidays with 36 days a year. 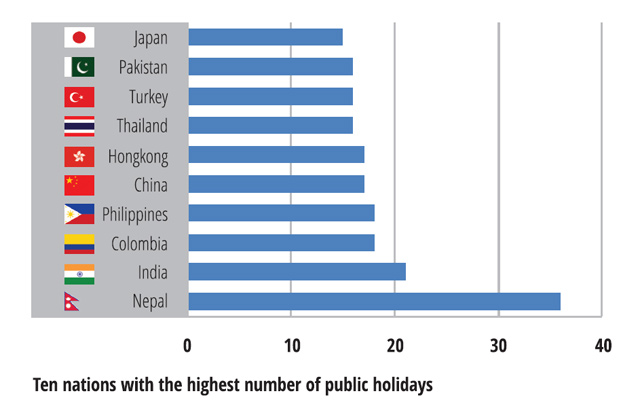 There is probably no country in the world where everything shuts down for two weeks, and half the population of the capital city goes home to the villages. China’s Golden Week comes close, but only Nepalis do holidays with such enthusiasm and inaction.

Generally, people get almost eight days off during Dasain, but this year the main days of Ghatastapana, Phulpati and Kojagrat fall on Saturdays so most Nepalis are regretting the loss of three days from the long holiday. Soon after Dasain comes Tihar, another four days off, and then in the Tarai there is the Chhat festival. More holidays. This year’s 2073 calendar indicates that there are 36 public holidays. Add that to the impromptu days off that the government declares from time to time to mark important events, and it is clear why Nepal tops the list of countries for the most number of public holidays in the year.

Some would argue that this is unfair because Nepal only has one-day weekends, and therefore the national holidays compensate for it. True, if Sundays are counted most other countries would have 48 more days off in a year.

Public holidays, national holidays, or legal holidays are terms meaning nothing more than a day in a year set aside as non-working days decreed by the government. There are many countries that enjoy the privilege of having a large number of public holidays generally marking the anniversary of an important historical event, religious celebration, or a holiday falling on a certain day of the week or following some calendar system, such as the Chinese or Lunar Calendar.

Nepal tops the list of countries with the most public holidays (see graph) with 36 days a year, followed by India with 21 public holidays, Colombia and the Philippines with 18 days, China and Hong Kong 17 days, Thailand, Turkey, and Pakistan with 16 days. Japan, Argentina, and Sweden each have 15 holidays per year.

There are pros and cons to having so many public holidays. The advantage is that it gives families time to bond, and in many countries public holidays are part of a national strategy to increase social cohesiveness and strengthen family ties. Nepal doesn’t need this so much because we already have a strong clan culture and there is plenty of socialising within the family and community.

On the other hand, a surfeit of public holidays can also have a negative impact on the economy if it is overdone. For example, banking holidays and closed government offices inconvenience the public, and affect businesses. It is really necessary and important for the government to strike the right balance.

After the political change of 2006 successive govenrments have been under pressure to make holidays more inclusive. The number of holidays for Dasain have been cut to allow for more holidays such as Losar for various ethnic groups as well as festivals in the Tarai which were earlier not officially recognized as national holidays. Also, for a time, there was confusion about the celebration of Nepal’s national day: Constitution Day, Republic Day or People’s Movement Day.

An average civil servant or office goer in Nepal has 36 days off in a year, and is also entitled to a 15 day annual leave, 12 days casual leave and six days of sick leave – bringing the total number of holidays to 69. With most people working barely 244 days in year, productivity is seriously affected.

It is the Cabinet which decides how many official holidays the country should have, and since it is the government which is most in hurry to declare a day off we cannot expect much by way of reform in increasing the number of working days.