Graft at the grassroots 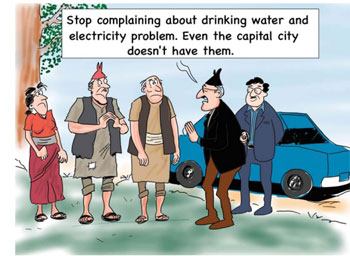 DIWAKAR CHETTRI
Responding to questions raised by Constituent Assembly Members, the Prime Minister conceded this week that corruption levels have increased in the absence of locally elected bodies across the country. With no elected mayors and village chiefs, he added, resources set aside for development works have been squandered.

This admission is not surprising. The last local body elections took place in 1998. In 2002, when the civil conflict was at its height, Prime Minister Deuba, citing risks and security, decided not to hold local elections. As a result, since 2002, government-appointed civil servants have been serving as local councilors. But depending on which way political winds blow, these civil servants, most of whom have no real stake in constituencies they preside over, are so frequently and arbitrarily transferred that rare is the one who actually gets to complete a full term as councilor in a village or a town.

This game of musical chair has long been lucrative for local political parties of all ideological shades. In 2006, when political concerns were in flux in the aftermath of the signing of the Comprehensive Peace Agreement, the then government blessed the formation of an innocent-sounding apparatus called ‘all-party mechanism’, which, once set up in every village, would be run by local political parties to deliberate on local governance matters.

But from that time onward, this all-party mechanism mutated to adversely influence local governance and budgetary decisions in such a way that its interference was seen as a license to engage in ‘corruption by consensus’. Despite there being plenty of evidence, Kathmandu-based national parties pretended not to see what went on in the village councils: if the cadres could find sustenance by rigging local construction contracts and purchase orders, why make life difficult for them? Finally, under pressure from development agencies and local citizens’ groups, the government withdrew its recognition of all-party mechanisms last year.

There is, however, the other side of this equation, which does not get discussed in conversations about local government: Given such a sorry state of local governance, how did the poor deal with corrupt officials and poor service delivery? For the most part, they did not. In some cases, thanks to development assistance, local groups received exposure to social accountability tools, which they used to hold their representatives accountable.

Federation of Water and Sanitation Users, for instance, trained NGOs and journalists on how to be a part of the village-level budget planning process, how to lobby for additional funds for water supply, and how to ensure that the funds earmarked for open defecation-free campaigns actually ended up there. Similarly, in Kaski and Banke, trained radio journalists collected complaints via text messages, and developed programs to broadcast the complaints to local officials for solutions.

Likewise, women and representatives from disadvantaged communities serving on school management committees learnt the basic principles of financial management so that they could ask critical questions to ensure that funds allocated to run the schools were not wasted. With support and training, many local community groups, often run by hitherto voiceless citizens, started hosting public hearings on how programs on education, literacy, nutrition, forestry and the like are faring in their communities.

To be sure, these efforts at raising the status of local accountability could be contextual, varied and idiosyncratic. But the message is clear: even when the government does not have its act together, it has not stopped citizen groups from acquiring skills to continue to press for accountability. In this context, when the prime minister does call for local elections, he will have found that the people have long been ready to demand better services and accountability.

Corrupt at the roots, Anurag Acharya

"Tax evasion is a part of Nepali culture"

Interview with Shailaja Acharya in Dristi, 28 May
Wow! It namely likewise fine treatise about JavaScript, babyliss pro curler I dissimilar Your post doesn't acquaint any sense. ray ban outlet uk if information are defined surrounded sketches one can effortlessly be versed with these. hollister sale I think a visualized exhibit can be better subsequently simply a effortless text, chanel espadrilles for sale that why it gives you improved quality. getnjloan.com Can you amuse forward me the code for this script alternatively interest distinguish me surrounded detail among relation apt this script? Vivienne Westwood online get a babyliss perfect curl Very soon this network sheet longing be outstanding among all blog viewers, isabel marant sneakers saleI too prefer Flash,