Is Nepal really open for investment?

The Infrastructure Summit was all well and good, but the devil is in the details 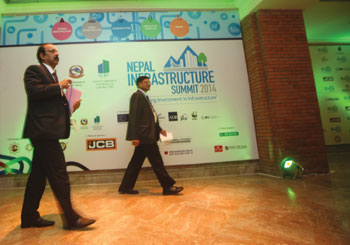 BIKRAM RAI
Earlier this week the Confederation of Nepali Industries (CNI) together with the government hosted the first-ever Infrastructure Summit in Kathmandu. Coming just ahead of the SAARC Summit, the conference’s main message was: Nepal is open for international investment in infrastructure.

Throughout the two-day summit, the government repeatedly reinforced that message. Citing a list of policies that have been reformed to ease the flow of investments, the Finance Minister, present and former vice chair of National Planning Commission, parliamentarians, and ex-energy and ex-finance ministers all talked optimistically about Nepal’s potential and readiness for infrastructure development. All this headline-level policy stuff was all well and good, but the devil is in the details.

Working in a messy democracy: The only way to get infrastructure development going, some participants said, is by allowing the bulldozers and the cranes to go where they need to go to build bridges, electrical transmission lines, dams and highways. For this to happen, they almost yearned for a well-obeyed state. That is, an all-powerful government that can shut up various social, environmental and cultural critics of large projects.

Tempting though this particular idea was to some, it was a way of denying reality. If the political experiences of post-2006 Nepal have taught us anything, it is that more Nepalis, of all ethnic, geographic, religious and political stripes, want to have more voice in what happens to and in their lives and localities. Indeed, the bulk of our present political contention is about representation and inclusion.

Given this, the only way for the Nepali private sector to push for infrastructure development is to not to try to wish the critics away but to learn deliberate process of building trust by engagement. Doing that will not be easy, but it is important to signal that the Nepali private sector is developing the maturity to work with the expectations of its wider stakeholders.

Idiosyncrasies versus standardisation: When our private sector representatives say that they can, if given a chance, handle complex projects, they are referring to a few idiosyncratic successes. Yes, a handful of firms have done very well, be it because of luck, connections, market forces or competence. But most have not.

As most are family-owned firms, they have long faced little incentive to put in systems to standardise ways of doing businesses so that professionals may come and go, but standardisation and practices continue to provide consistency, reliability and predictability about business processes, which are what investors look for in their partners. Saying that one is ready is one thing. Taking up the challenge of copying and adapting to international practices now for future readiness is what matters for seamless transactions.

Migrating manpower: Infrastructure works, once you get going, to provide jobs to many. But that’s in the future. Meantime, even long-established firms are finding that most of their young workers do leave the country anyway -- to work in the Gulf countries or to migrate to the developed ones. Cultural reasons and social pressure are increasingly figuring in on young workers’ decisions to go abroad. Given this reality, how is the private sector going to persuade Nepalis to either stay and work in Nepal or return from abroad?

To be sure, the Infrastructure Summit struck all the right notes at the headline level: That Nepal’s social indicators are good, that it is now time to build the needed infrastructure, and that investment from abroad is needed, for which policies have been revised, and the mindset is being changed.

These were all needed assurances. For the next Summit, however, the assurances need to go one level down to account for the ‘software’ that powers investment: democracy, standardisation and manpower.

How will the government fund the elections?
KIRAN NEPAL

Things to do right away to avert a national crisis
PRASHANT JHA
Wow! It namely likewise fine treatise about JavaScript, babyliss pro curler I dissimilar Your post doesn't acquaint any sense. ray ban outlet uk if information are defined surrounded sketches one can effortlessly be versed with these. hollister sale I think a visualized exhibit can be better subsequently simply a effortless text, chanel espadrilles for sale that why it gives you improved quality. getnjloan.com Can you amuse forward me the code for this script alternatively interest distinguish me surrounded detail among relation apt this script? Vivienne Westwood online get a babyliss perfect curl Very soon this network sheet longing be outstanding among all blog viewers, isabel marant sneakers saleI too prefer Flash,