The ideation of the nation 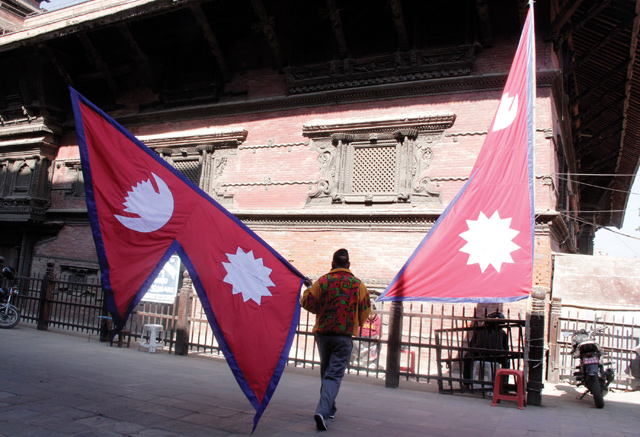 When I ask visitors what they think of Nepal some fumble, most blabber in readymade diplomatese, and a few have revealing insights. But the question itself is more revealing than the answers.

This recurring question is probably a result of something serious and damaging. Our sense of identity has faced a savage blow in recent years. Young Nepalis across socio-ethnic-cultural strata feel a sense of loss about their identity. There is an urgent need for reassurance about who we are.

Journalist Subina Shrestha recently threw out ‘a random question to all Nepalis’ on Twitter about what it means to be a Nepali. The answers were intriguing. What emerged was a rejection by other communities of the traditional identity of ‘Nepaliness’ narrowly defined by the cultural symbols of the hill Khas-Arya community. There was no consensus on what unites us.

The violent events and atrocities of the last few years have ushered in a period of confusion and conflict. The politics of ethnic confrontation is seen as a result of ethnic hegemony in the definition of nationhood. This idea, most recently cemented by anthropologists like David Gellner, sees Nepali society as an interrelation of strict hierarchies of ethnicities. This is not only simplistic but also a dishonest way of categorising a society because it ignores all the other ways in which people see themselves.

Gellner’s idea of Nepal as a precarious asymmetry of unequal ethnicities draws from the paradigm of anthropologist Diana Forsythe’s analysis of German identity. What looks like a singular national identity, she says, is in practice a hierarchy. Thus, there are gradations of German-ness, proving that national identities usually have an ‘ethnic core’.

In his book, The Battles of the New Republic, Delhi-based Nepali journalist Prashant Jha builds on this paradigm of a hierarchy of ethnicities, and makes a political point in support of Madhesi regionalism. His unrestrained account of the childhood of a Madhesi in Kathmandu makes him feel ‘more at home in the school in Delhi than in Kathmandu’. As a child in Kathmandu, Jha writes that he had to create a web of lies to sustain the ‘fiction’ that he was as Nepali as any other student in the classroom when asked ‘How can a Jha be Nepali?’.

It is very easy to drag these histrionics into political meta-narratives. The Nepali political scene is dominated by the Madhesh issue, which is seen as a case study of an ethno-nationalist movement, and a result of the hierarchical ethnic exclusion sponsored by the Nepali state for centuries.

Gellner and Jha are partly right. But analysing the subtext, one can make out that Jha chooses his words and arguments carefully. When he quotes a child in Kathmandu as an example of how the Nepaliness of ‘others’ are questioned by the members of the ‘Ethnic Core’ he creates a hole in his own argument and ignores the reciprocal relations between ethnicities depending on their area of dominance.

It is argued that ‘Nepali’ is an ethnical representation rather than a national identity. Post-1990, in a reverse to everything that had been done during the Panchayat era in Nepal, vibrant intellectual energy was redirected from nation-building to ethnicity-building. Nepali has now become representative of a narrow group of ethnicities for some.

There is a need to redefine Nepali identity, but the approach has to be driven by a futuristic assimilation for progress rather than deep prejudices of the past. Some have outrageously even suggested changing the name of the country itself, saying that the idea of Nepal and Nepaliness has over the years assumed a narrow definition, at the core of which lies the cultural attributes of the Hill, upper-caste people. They believe it is too late to even try to change that meaning.

The real problem with this well-intentioned attempt to empower ethnicities politically by disassociating it from the Nepali identity is in its inherent contradiction. This ideation of the nation as a compromise between otherwise hostile ethnicities leads to a miniaturisation of nationhood and suggests a precarious arrangement always on the verge of violent eruptions.

This confusion about our identity has transferred to foreigners as well. One friend making an effort to learn Nepali after having spent almost a decade in Nepal, confessed that the reason she did not do so earlier was because she believed the act of learning just one of Nepal’s many languages was itself a political statement supporting ethnic hegemony.

The idea of Nepal has been turned into a great conundrum by a one-sided dominance of scholarly, political and fictional narrative building over the years, mostly guided by a superficial foreign vision. We now need more nuance, and more practicality, to imagine a Nepal for the future of Nepalis.

Interview with Dolma Chomo in Nepal, 11 May

Sudarshan Sigdel in Shiksha, 4 May

Flamenco has arrived in Nepal
Wow! It namely likewise fine treatise about JavaScript, babyliss pro curler I dissimilar Your post doesn't acquaint any sense. ray ban outlet uk if information are defined surrounded sketches one can effortlessly be versed with these. hollister sale I think a visualized exhibit can be better subsequently simply a effortless text, chanel espadrilles for sale that why it gives you improved quality. getnjloan.com Can you amuse forward me the code for this script alternatively interest distinguish me surrounded detail among relation apt this script? Vivienne Westwood online get a babyliss perfect curl Very soon this network sheet longing be outstanding among all blog viewers, isabel marant sneakers saleI too prefer Flash,