What’s next for the Nepali Congress? 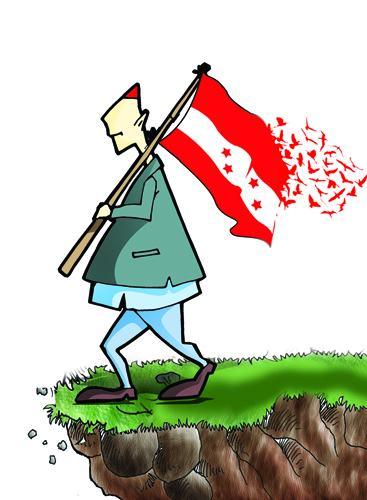 After suffering humiliating defeats in all three levels of elections under the new Constitution last year, the rank and file of Nepali Congress (NC) is now debating how the party should move forward.

The NC’s old guard argue that party President Sher Bahadur Deuba need not step down, blaming candidates, internal rivalry and national-international factors for their electoral debacle. But the NC’s young turks believe that they succeeded in the past only because of a divided Communist vote bank, and their top leaders ignored the need to strengthen the party. They argue that the NC needs an overhaul if it is to counter the Left unity.

Last week, Deuba and his party’s young firebrand leader Gagan Thapa engaged in a public spat over the issues of leadership and reforms. While Thapa was argumentative, Deuba looked impatient and irritated.

Thapa and young NC leaders are pressing the NC’s old-generation leaders to retire, allowing the new breed of energetic, idealistic and visionary democrats to emerge. They are angry, and insecure about their political future. But Deuba does not seem to care.

To be sure, the NC had suffered humiliating defeats even in 1994 and 2008. It bounced back, but this time it looks far more difficult. A party that was rejected by people in the first elections under the very Constitution it led in drafting is unlikely to bounce back easily. Nothing is impossible in politics, but party needs a lot of soul searching to regain people’s trust.

The fact that the NC will be out of power for at least five years could be a blessing in disguise — its movers and shakers will get more free time to contemplate, strengthening their organisation, reforming policies and getting a born again leadership in the process.

The NC can reclaim its lost glory if it takes on the role of a constructive opposition instead of wasting energy on cobbling unnatural coalitions. It needs to be watchful about the policies, programs and roadmap, which the communist government will be taking in the next five years.

In the ’60s, Mao Zedong had said that China will not export a political ideology. But Xi Jiping, arguably the most powerful leader since the Great Helmsman, has signalled he is out to consolidate his power. This may influence the way Nepal’s Communists behave.

The mandate that the NC has got from last year’s elections is to balance a resurgent Communists, safeguarding not just democracy but also liberal values. Ahead of the 2017 elections, the NC stood in favour of diversity by supporting a Constitution amendment bill. But its leaders failed to explain to people that their stand was for an integrated and sovereign nation. As a result, people viewed them with suspicion and voted them out.

The NC now needs a leader who is eloquent, argumentative and idealistic. Fortunately, the party already has a leader with all these qualities: Pradip Giri. If the NC appoints Giri as its parliamentary party leader and Gagan Thapa led the NC in the Federal Parliament, the UML-Maoist government will have to act more responsibly. Their duo will also save the Left Unity from morphing into a totalitarian force.

During elections, the UML-Maoist alliance effectively branded the NC as a party of the corrupt and of criminals. The humbling of the NC shows that a large section of people subscribed to what the Left Alliance told them. The NC needs to shed this label, and rebrand itself as a party of patriots and democrats working to fulfil the dreams of the visionary B P Koirala. The current NC leadership is acutely incapable of doing this. If anyone can, it will be the Giri-Gagan duo.

How can the NC help the farming-working class? How can it contain the outmigration of able-bodied Nepalis? How can it emerge as a party of Dalit, Madhesi and Janajatis?

For decades, the NC was dominated by B P Koirala and his clan. Deuba challenged the Koiralas, and took over party leadership. While the Koiralas are still trying to reinstate the dynasty, a resolute Deuba is trying his best to stay put.

The NC will be doomed if it doesn’t extricate itself from their clutches.

Rising from the ashes, Dinkar Nepal

"We are moving in the right direction"

You can’t just take over, Your Majesty!

Nepal Samacharpatra, 29 July
Wow! It namely likewise fine treatise about JavaScript, babyliss pro curler I dissimilar Your post doesn't acquaint any sense. ray ban outlet uk if information are defined surrounded sketches one can effortlessly be versed with these. hollister sale I think a visualized exhibit can be better subsequently simply a effortless text, chanel espadrilles for sale that why it gives you improved quality. getnjloan.com Can you amuse forward me the code for this script alternatively interest distinguish me surrounded detail among relation apt this script? Vivienne Westwood online get a babyliss perfect curl Very soon this network sheet longing be outstanding among all blog viewers, isabel marant sneakers saleI too prefer Flash,